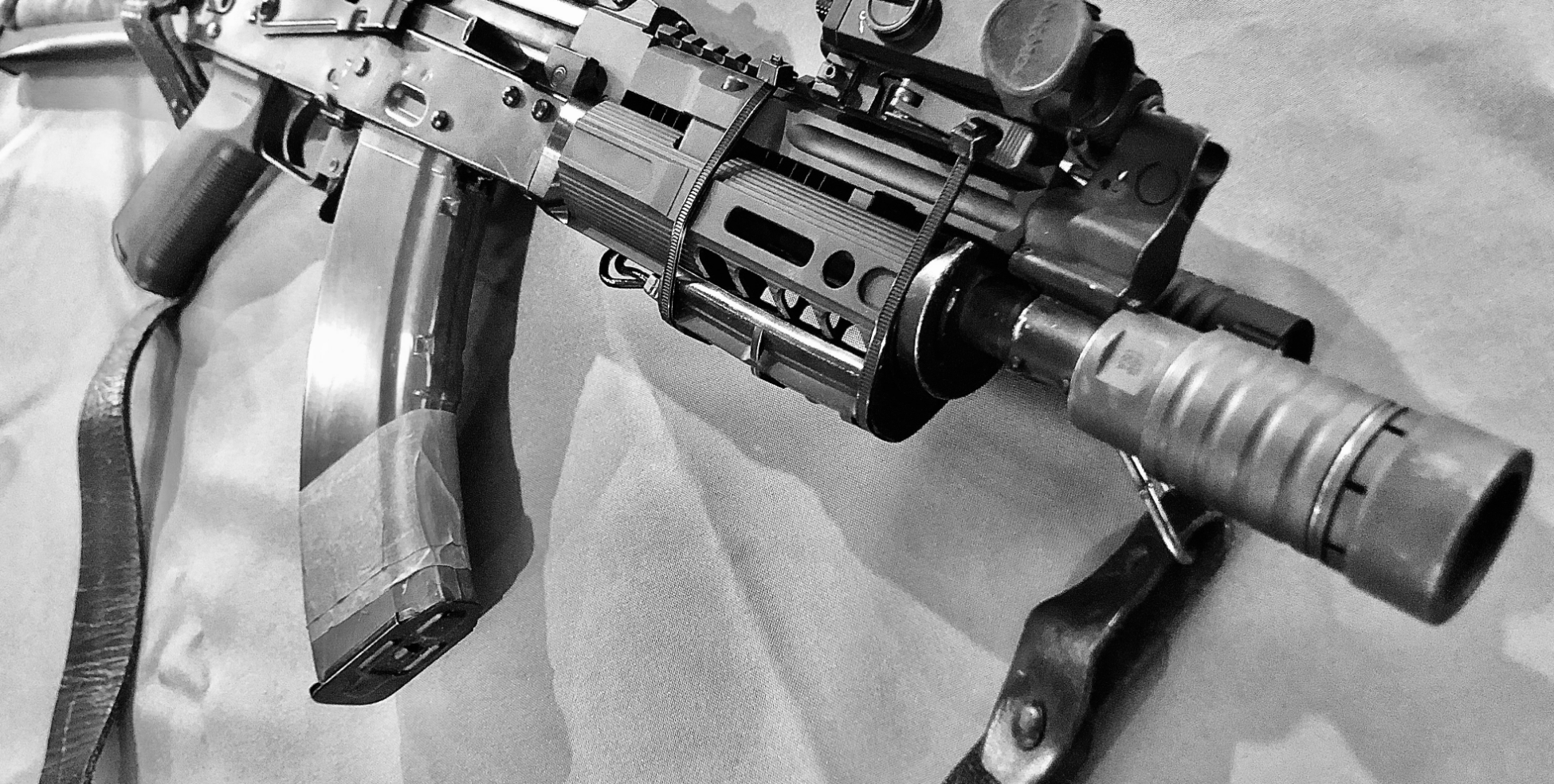 In the past, we’ve discussed how to run the AK, but the question remains: Why choose one over another platform?

The Avtomat Kalashnikova, or AK platform, is the most prolific firearm on the planet. Entered into service in 1947, there are some 75,000,000-100,000,000 of them floating around conflict zones. They’re the only rifle to appear on a nation’s flag. Trivia aside, most Westerners who know anything about guns assume that the AK is abundant because it’s cheap and easy to make… NOT because it’s a worthwhile contender when compared to more modern designs.

So, now that we’ve spent some time talking about how to run the AK, let’s jump in and talk about why you should care… why the AK is still a very competitive choice, regardless of what *ahem* certain people have to say on the matter.

Before we jump in and discuss the AK, let’s say the following on the topic:

With that out of the way, let’s dig in and discuss why the AK is a reasonable choice for a defensive rifle.

One of the most prolific wastes of time on the internet is the classic “AR15 vs AK” debate; this question seems to creep up every time a new generation of gun owners enter the market, so let’s be perfectly clear about something:

If you’re an American, the AR is probably the better choice for the average user for a number of reasons:

While to a lesser degree, the AK platform does as well, the rifle is often poorly understood. Most of the training you’ll encounter for rifles and carbines are geared specifically for AR pattern rifles and users.

Another important note before moving on is this: small arms technology really seems to have plateaued. Yes, we bolt more devices onto our rifles, but if you follow military arms at all, you’ll probably remember the M4’s imminent replacement by the H&K416, the XM8, the SCAR, and a few planned redevelopments around improved cartridges.

Across the ocean in Eurasia, the AK has been subject to the same pressures. Since the 100-series AK, developed in the 90’s, there has been a dozen contenders as Kalashnikov Concerns aims to reinvent itself and offer competition to western firearms. The AK12 and it’s predecessors have fallen flat, and the AK19 is… well, just an AK with new furniture and some modernizing.

Why is this important?

Because the question of “which is better?” isn’t just between the platforms, it’s within them as well… and frankly, it’s every bit as tired and circular.

So, with all of this out of the way, why would a westerner want an AK, given the mountain of options at their feet?

Furthermore, *which* AK should you consider?

The AK is an extremely simple and robust platform. What it lacks in inherent accuracy, it makes up in mechanical simplicity.
Whereas the AR platform is laden with tiny springs and pins, the AK is really a box of rivets, some sheet metal, and a couple main springs (the trigger assembly and recoil springs). Over time, springs fatigue and lose their efficacy, which gives the AK a slight nod in terms of longevity.

As well, the gas piston design of the AK platform could not be more “drunken Russian”. It simply throws as much gas as possible from the burning powder at the piston, and anything leftover just sorta bleeds out. Compared to the AR’s measured and dosed approach, the AK’s operation seems coarse and crude.

…but it works. It’s precisely that overkill approach that keeps the AK cycling in poor conditions, deep cold, sand, mud, ice, and everything in between.

As well, they are machines, and they DO break and have stoppages. Fewer than other platforms, by my estimation, but anyone who tells you their (insert gun of choice) doesn’t jam or break hasn’t fired enough rounds.

So the AK has fewer parts to break and those parts tend to be robust… But that’s not the whole story.

As gun culture 2.0 began to segue the conversation away from hunting rifles and shotguns, and towards concealed carry and fighting rifles, the AK was off to a slow start for a few reasons.

There were no real accessories, which Americans LOVE, and the rifle didn’t exactly work with you. Ergonomics and sights were the looming problems with the platform, and shooters would complain that reloads were slow and clunky. The sights on the AK – almost entirely 7.62x39s in those days – were poorly understood.

Poor zeros, canted front sight bases, mismatched receivers and trigger packs, the admittedly strange ballistics of the 7.62×39… all of these things made the AK the budget stepbrother of the AR – which was sleek, customizable, smooth shooting, and easy to shoot and manipulate.

I remember the first time I saw a quality AK, an Arsenal of some sort, and the other shooters at the range were balking about the price, which back then was around $1,200.

War in Iraq was fairly recent, and the urban theater was popularizing anti-terror operators, as war always does. Soon after, pictures of operators in shemaghs started to give way to military contractors with AKs and PKMs running convoys of Hiluxes and Land Cruisers through Highway 1, and people started to take note of the AK.

Flash forward 15 years and the AK is the hip, expensive, and coveted rifle of the tactical hipster as well as the utilitarian.

There’s an important underlying observation here: war is fashionable, and a majority of the shooters out there are playing a perpetual game of finding the current trends.

In 2009, when I got to Fort Lewis, a friend picked me up and handed me a tennis racket bag. I unzipped it partially, saw there was an AK, and said “coo”, and went about my business. I’d been wanting to grab an AK to get a little more hands on than familiarization fire sessions would allow for. In short, I wanted to know – intimately – what my enemy’s weapon was capable of.

Over the following months, I realized that a side folded AK was shorter than a collapsed Colt Commando (with an 11.5″ barrel), while still maintaining a 16″ barrel, and thirty rounds of .30 caliber. Shooting cars, cinderblocks, jersey barriers, and buildings, I started taking note of the 7.62×39’s ability to just chop the shit out of anything it managed to hit. It wouldn’t be long before I’d see the effects of the 7.62×39 on humans, and the results were, predictably, not pretty. But, then again, that’s gunshots. They’re gnarly in general.

I stayed in the military for another few years and kept the AK on the private side because I enjoyed it. The more time I spent on it, the faster I got. I realized it’s not un-ergonomic, it’s just different. It might not be as fast as the AR, but in my view, reload speed was tertiary to decent cover and movement, so 2 tenths of a second or so didn’t seem to be too much of a burden.

Then I merged back into civil life, on my own. No more fireteams or air support or armorers or logistic supply chains. The rifle was no longer an offensive tool, but a defensive one.

I couldn’t envision many situations in which I’d be maneuvering by volume of fire, so the extra barrier penetration, portability, and mechanical toughness were more important than ever.

I began taking the AK to classes, surrounded by ARs and other more modern designs. I never had a failure and I learned pretty quickly that decent optics and steady hands were a big part of my accuracy game. In that regard, the AK kept pace just fine.

I’d had AKs before the military as well, in that much shittier life best left forgotten. They were cheap, effective, reliable, and simple. They were also less forgiving of mistakes, and viewed as the novice’s gun, and with some decent reasoning.

But, for all the internet discussions, articles, arguments, and opinions, why hasn’t the basic design changed?

Because it works. It simply works. So does the AR.

We’ve arrived at a stalemate between the AR and AK, and there really is no heir apparent or tie-breaker likely. We can add utility to them by way of rails, optics, lights, and designators, but neither has the other decisively beat.

That’s not the case with many other rifles. The G3, M1A, the Mini-14, and a dozen other designs have been left in the dust because they’re not easy to repair, they malfunction too frequently, the parts aren’t widely available, or they’re ergonomics really are bad. Regardless, the AR and AK are the last rifle’s standing, even after exhaustive searches for replacements and updates by both the U.S. and Russia.

But what about 5mm AKs?

While the original AK was designed around the 7.62×39, the Russians followed the American footsteps in switching to a 5mm cartridge – the 5.45x39mm, which compared favorably to our 5.56x45mm. Does the 5.45x39mm change my opinion of the AK and it’s benefits?

Not at all. The 5.45mm is an extremely flat shooting, accurate, and devastating cartridge. While it gives up some ground in barrier penetration, the lighter weight and accuracy again put it neck and neck with the M4.

7N6, in particular, was dubbed “the poison bullet” or the “Devil’s Bullet” in Afghanistan, as even peripheral wounds resulted in death. The 5.45mm AK’s are in use widely for a reason, both among U.S. users and those abroad. This is due to the hollow cavity in the tip of the 7N6 round, which causes the bullet to tumble, which creates severe wound tracks that are difficult to treat.

The 5.56mm AKs are likewise serviceable, reliable guns. Initially, the 5.56mm AKs in the U.S. got off to a rough start – the slightly longer 5.56x45mm required some redesigning of the AK’s internals. While it’s hard to substantiate now, it’s said that the old imported 5.56mm AKs were brought in with 5.45mm magazines, which didn’t feed reliably.

While that reputation still sticks today, ISG has some devout 5.56 AK guys, and they’ve never given us a reason to doubt them. They’re reliable, low recoil, and accurate, as well as tough.

If you’re looking for a 5mm rifle for the lighter weight, the AK74 and it’s derivatives are fine choices, and still maintain the reliability of their forebears.

The AK isn’t as easy to use as the AR. It’s a heavy handed brute of a gun that doesn’t waste a whole lot of time with refinement or niceties. If that’s what you’re after, you’re probably better off sticking with an AR here in the West.

If you travel, or are looking for a rifle that is built with simplicity and longevity in mind, however, the AK can’t be overlooked. With plenty of high quality, modern aftermarket parts available to shore up some of the AK’s handling shortcomings, the race for which is “better” is almost entirely rhetorical. They are both fine rifles, and will likely meet your needs if you were ever forced into a situation where grabbing a rifle was necessary.