Guns of ISG: Why the Handgun? 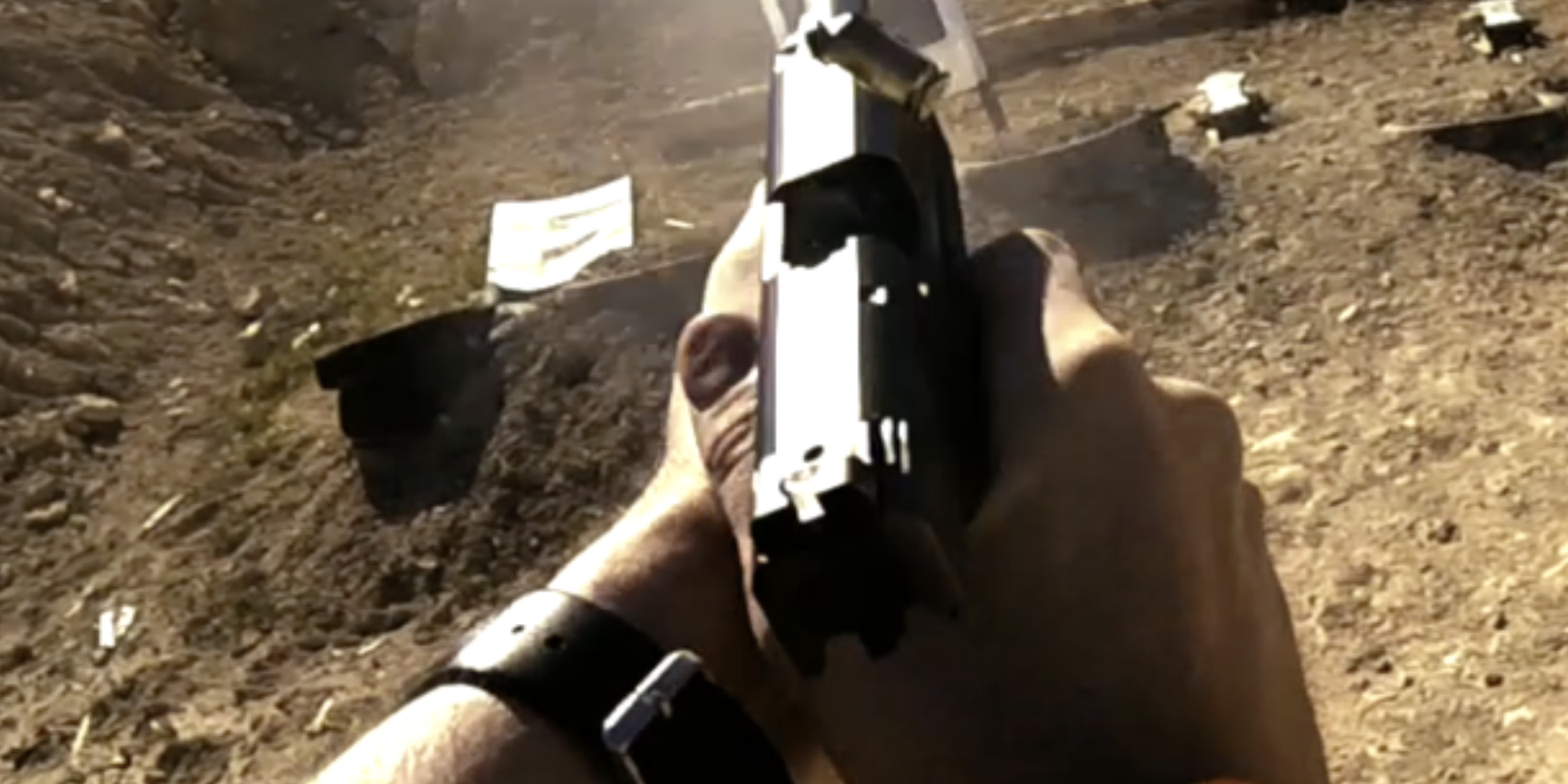 It’s said ‘handguns are to fight your way to a rifle’. That’s nonsense. The handgun is often ideal, but you’ll need to put in work to be an asset.

The handgun is an ubiquitous tool of personal protection.
While synonymous with both protection and crime, the general public knows remarkably little about the handgun, it’s role in overall security, and why – love it or hate it – there’s nothing else that does it’s job for self-defense. Whether your a seasoned pro, or considering making the jump into firearms ownership, read on as we make the case for the handgun.

With body cameras and cruiser dash cams becoming the norm, we are starting to see good information emerge about what really happens in gunfights ‘on the streets’. Frank McGee’s “rule of three” suggests that gunfights last about 3 seconds, with 3 rounds fired at 3 yards.

…the pistol is a bridge between helplessness and a fighting chance.

Why is that important?

While this is more of an average, it tells us something that we should all instinctively know: When the shooting happens, we usually don’t have time to run and collect a gun from storage, our car, or a safe. If it’s not on us, it might as well be on the moon.

While some variation exists (most of this information is from police experiences; home invasions/robberies are substantially different), we should be able to agree time is one of the critical elements of surviving any emergency.

The FBI recently acknowledge that the armed citizen’s intervention in active shooter situations has stopped greater tragedy. Given that, while we shouldn’t be lulled into thinking the handgun is ‘the great equalizer’, we shouldn’t underestimate it’s ability to work in a pinch. Most importantly:

It’s a tool we can discreetly carry most of the time.

We often say ‘the Handgun is the lowest common denominator’. What we mean is:

This is why we view the pistol as the most practical and necessary tool for self defense, and almost all of our writing assumes that the pistol is the ‘primary’ firearm available. This stands in some contrast to conventional wisdom.

For ages, sayings like “A pistol is to fight your way to a rifle” have permeated gun culture. Like most great sayings, once they’ve become cliche, they lose their meaning.

The truth is: When shooting starts, the pistol a bridge between helplessness and a fighting chance. More often than not, fighting your way to a rifle is a fantasy.

With that in mind, let’s break down how to select a handgun, train to be effective in its use, and discuss some considerations when carrying it for protection.

Often as not, buying a handgun becomes a “big” decision. The purchaser asks friends for advice, considers what they like and don’t like, holds a variety of guns, and matches their preferences to their price point. There’s nothing wrong with this per se, but when asked “Why did you decide on this pistol?”, here’s the most common answer:

The pistol’s primary job isn’t to feel good in your hand; it’s to be effective, reliable, and portable.

The way it feels in the hand is often mistaken for shootability. The issue there is that shootability is largely a function of how much you practice. To some degree a pistol needs to be sized to the shooter, but if you buy a pistol that’s too big to carry, it doesn’t matter how good it feels in the hand. It needs to feel good in the holster. Likewise, if it feels good in the hand but doesn’t perform, it fails to meet a critical requirement… So before you decide to buy set the ‘feel’ aside and consider the reliability, weight, frame dimensions, and availability of quality holsters. At ISG, we’re not going to tell you there is one best pistol, but what we will say is:

We can’t say definitively what will the best for you, only that there are plenty of good options from reputable manufacturers.

The handgun requires a few things that need to be factored in to it’s purchase price: a holster, a few spare magazines (and pouch, if you choose to carry a reload), and some ammunition both for training and some for personal defense. Once these things are in hand, it’s time to start training.

Training can be time consuming and costly; it’s usual for a quality course to cost $500 and last a full weekend. This is where most people’s enthusiasm takes a hit. Provided they never walk through that door, they’ll never know just how much they’re betting on luck. While true that people with no experience can (and do) defend themselves frequently without problem, many others are not so lucky. Not all trainers are competent, even the ones with solid credentials, so read and make a realistic assessment of your threats, and build your training plan to meet those ends.

Your training plan should have three major components:

Once you’ve committed to Force on Force, congratulations. For most people, this is as close as you’ll ever get to a real gunfight, and it’ll likely be more difficult. While we hope you’ll indefinitely maintain these skills, once you’ve hit this level of competency, the chances of making a horrible mistake are low, and you should be reasonably well prepared mentally for the realities of a gunfight.

In order for the handgun to be useful, it needs to be present.

Often as not, people buy a handgun in response to fear. Something terrible happens and they think to themselves “I sure don’t want to be in that position.”

They may carry briefly but generally don’t put much effort into finding a good holster or dressing around the gun, and it quickly finds itself relegated to a dusty drawer somewhere. In order for the handgun to be useful, it needs to be present. Having a quality holster, a sturdy belt, and clothing that help you conceal will go a long way in keeping antipathy away.

One of the things we feel compelled to mention about carrying is comfort. Not just physical, but being psychologically OK with carrying a weapon. Often times legal gray areas, irrational fears (like the gun discharging), the prevalence of “gun free zones” and the like make it complicated. All that tends to make people nervous, as if they’re hiding something.

There are all sorts of “tells” that trained people look for to tell if someone is carrying a gun, but the bottom line is that you need to just accept that what you’re doing is legal. The guys who are good at carrying guns will be almost impossible to spot, and if you’re not good at it, it’ll be impossible to hide. Like anything else, being subtle comes with practice, but reflect back on selection… have the right holster, clothing, and pistol for the job.

Another thought on this matter is that tells go both ways: criminals see things like types of holsters and where you’re carrying. For most criminals, a holster is a “tell”. If you’re sticking people up, the last thing you want to explain (after you ditch your hold-up piece) is why you’re still wearing a holster… so pocket carry and “Mexican carry” are far more common in those circles.

I got made by a thug while in a drug house once because I was carrying a holstered pistol that was too big for me under poor cover garments. He could have easily overpowered me and took it, but being aware delayed his action just long enough to get out of there. Criminals have internal risk matrices as well – they’re not fall guys and they won’t throw themselves into a suicidal death for no gain.

In any case, this is why we constantly preach a multi-faceted approach to defense; you want your first line of defense to be awareness and spatial recognition. If that fails, the physical fitness to escape or fight your way to a dominant position is mandatory. If the altercation continues (or escalates to a lethal force encounter), you need to be able to work your handgun with consistency at ranges from contact to 25 yards.

Don’t end up in the position I did. Learn from our mistakes and find something you can comfortably carry, and look like you belong.

In the Urban Environment

So, let’s talk about defensive application for when you’re out and about. As we’ve discussed at length, awareness is the first and most important skill you can cultivate. It’s free, it’s not overly complicated, and you can train yourself to do it anywhere.

An honorable mention is fitness. Don’t overlook this, please. Just playing the odds, your physical health is orders of magnitude more likely to kill you than gun violence. You don’t have to be a gym bro/bunny, but make activity a routine part of your life. If you do, you’ll add options to your personal defense playbook; it’s easier to run, fight, and maneuver when you’re not sucking wind. It’ll also help in our other skill groups, which will make you a stronger person in general. Choose a martial art, and multi-task.

As to the handgun and it’s role in personal defense, there are a few basic skills we want to develop for urban spaces.

Similar to in urban spaces, if you grab a handgun for home defense, be mindful that you may have to shoot from an irregular position and that bullets that pass through light walls and windows may still strike bystanders. Be ready to manage spaces that may include children, pets, a spouse/significant other, and that may catch you while you’re relaxing (in pajamas, sleeping, watching TV, etc). For that reasons, give some thought to the following:

There are many more considerations, such as ways of isolating the threats, safe rooms, getting children, and interacting with responding officers, but for now, let’s try and consider the complexity of the situation. As always, start with good, routine security. Prevention is the best win.

There’s always a litany of good advice that people ignore, but here’s some of the common items:

This article is meant to be a broad overview of how we at ISG view the handgun’s role in our lives. Like any other tool, it has a specific purpose and developing skill with it will require experience, effort, and time. At present, the handgun is legal to carry in most states, sufficiently effective, allows for self defense without advertising to the world you’re armed, and can be applied to the broadest range of likely situations (home invasions, robberies, active shooters). For this reason, we hope you’ll give the handgun consideration and work towards a high level of proficiency with it.

Violence in the civilian sphere requires that our actions be ‘beyond reproach’. We will not have unions or JAG supporting us. We won’t have backup, or air support. Those who come to the scene of violence won’t do so with a gun and a commitment to help you… they’ll come with cell phones and disbelief.

While the chance that you’ll ever be in this situation is low, it’s a very high impact event. As such, we hope you’ll consider it important and treat the responsibility with the respect it deserves.