Guns of ISG: Running the AK 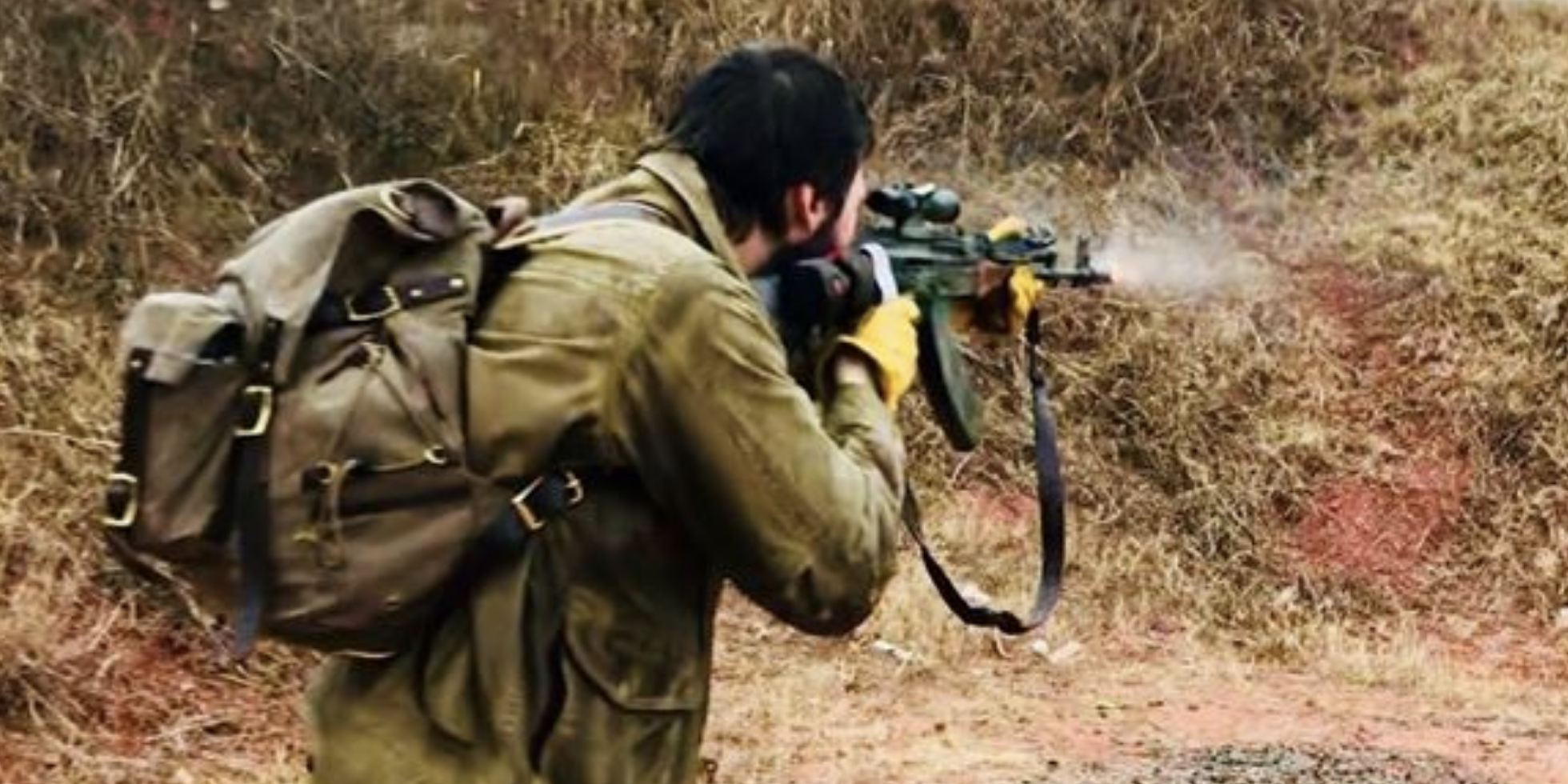 The AK’s popularity has rocketed with American shooters in the last decade, but have the techniques kept pace? We say “not even a little”. Learn to run the AK.

Welcome (back) to Guns of ISG, where we discuss practical approaches to slinging lead and talk shop about equipment.

Today, we’re going to talk about the red-headed stepchild of the rifle world… the AK.

While the M4 enjoyed popularity since recovering from it’s stumble out of the Viet Nam gate, the AK has been steeped in post-cold war bias… even though it and the Holodomor are the only things communism ever produced that worked. Shooters 15 years ago would laugh at you if you showed up with an AK, and you’d be seen as the poor guy or the newbie. Now, they’ve caught on and become trendy, thanks to Jim Fuller at Rifle Dynamics for showing the world what the AK was capable of doing.

While that’s cool for the AK, and as AK aficionados and we’re happy to see that the rifle is finally being recognized as capable, it’s led to a slew of bad tactics, incomplete or misunderstood technical work, and a tendency for shooters to believe that because it’s a “rugged” rifle, that it doesn’t require finesse.

It does… and we want to show you why. But first, let’s talk something very important.

First and foremost: Learn to zero your rifle and keep it zero’d. It’s mind-numbing how many guys grab long guns, shoot them at 25 yards, and complain of inaccuracy when they try and hit something a little further out.

Let this serve as a warning: It doesn’t matter how good your rifle or optics are if you don’t zero your rifle properly.

If you want a more elaborate tutorial, please check out this excellent presentation from the AK 4774 Operators Union: Zeroing AK rifle.

Worth noting is that the AK should be set up on a 100 meter range, even if you’re zeroing at 25m… this allows you to verify your work. At 25 yards, the rifle should be “point of aim, point of impact”. That means where your front sight post is, that’s where the bullet should go.

Once you’ve done a preliminary 25m zero, post a target out at 100 and set the AK’s rear leaf sight to 300. Your target should be approximately 10×14″, which should appear to be the width of the front sight post. The point of aimshould be the bottom of the target, so that when you take aim, the top of the front sight post should be directly underneath the target. Fire your group.

Don’t bring your group to the point of aim! You want to print a group that’s approximately 5″ high at this distance. Adjust for windage. This will zero the rifle so that the rear sight can be adjusted for distance. It’s important to remember if you leave the 300m setting, shooting at the target’s abdomen at any distance between 25m and 300m should yield a hit – though you’ll need to learn the hold over for more precise shooting. Once you’ve confirmed this at 100, the AK sights should be zero’d for their marked distances.

Even so, it’s not likely you’ll adjust in a firefight. Remember that 5″ holdover! Trying to take a head shot or a small target at close range will yield misses if you’re not familiar with the rifle’s dope.

If you’re familiar with the AR, you’ll know that depending on your world, there are a bunch of “remedial action” technicals. If you’re “rank and file” military, you probably learned “SPORTS” (Acronym meaning: “Slap, Pull, Observe, Release, Tap [forward assist], squeeze)*. If you’re a little higher speed, you might have the Type I and II, and III remedial actions, which look something like this:

(*Thank you to Joshua A. for these catches and the updated information to reflect most current SOPs!)

So, it’s easy to see why shooters would think that the AK is “crude”. While it is, running it well requires far more technique than the AR, and that’s what we’d like to discuss.

Regarding the AK, it’s common to see guys doing a few different reloads. We’re picking on “Tactical Rifleman” today, but not to target them. In all fairness, they did a good video, but they demonstrated some common flaws in running the AK, and we can use them to create learning points. We hope they understand that this critique isn’t of the person involved, but the technique being displayed. We want to really stick to three main points, because they’ll directly relate to your ability to work the AK without screwing things up. Those points are:

You can tell he’s used to the M4, as he tries to “beer can” the AK mag. He grabs it low, towards the base. That’s fine with an M4, but with an AK, which requires wrist articulation, it creates a lack of stability at the hinge point (where the magazine’s lip catches on the internal catch). Think of this like holding a pencil by the eraser. With an M4 you just shove the mag up. With an AK, you need to be able to use fine motor skills, like writing.

If you’re serious about getting good with the AK, work at getting a consistent grip that’s about halfway up the magazine. Doing this will put your hand below the receiver enough to not get pinched, but high enough that it doesn’t take much wrist movement to lock it down tight.

What you want is to minimize wrist articulation, which you’ll notice is a reoccurring theme that stretches from shooting to driving; straight wrists are strong posture. The farther that mag is from your hand, the more it’ll move, and the more you have to compensate.

Last thing to say on this: reloading the AK can be unforgiving. If you over do this process, you can miss the front lug and jam the rear lug. That really fouls up the works, and it’s one of the most common errors we see in new AK shooters.

Secondarily, when he uses the magazine to knock the other magazine free, he strikes with the ‘top’ or bullet side. Visualize for a second the amount of travel that is involved with that procedure. The top of the magazine (which needs to be carefully fitted into the magazine well) moves all over the place. Using the bottom of the magazine keeps the feeding end of the magazine roughly at the same level as the receiver, creates less travel, and less wrist articulation.

“Slow is smooth, and smooth is fast”.

What this saying really means is:

The thing to take away is that excess movement is usually what makes you slow. What we want to do is show you a way to do these things with less movement.

In the image to the left, what we’re looking for is the placement of the magazine at the same relative stage of the reload. In the top, you can see that really the only differences are:

Note that in both cases, the magazine is close to perpendicular to the rifle. This is good for this technique. If you choose to use this approach over something like the thumb technique (discussed below), it’s absolutely essential that you hit the magazine release consistently. If you don’t do that, you’ll glance off the magazine release, which can stop the mag from dropping free.

In the bottom shot, what I want to emphasize is where the full magazine is. Let’s pay attention to:

You can see the spent mag is at almost the exact same moment in the reload, so assess the photos and answer:

Which has less travel to return to the magazine well?

It’s important to say at this point, that the hand position on the mag is heavily dependent on what you’re doing. In the video, we’ll discuss administrative reloads, which actually help to grab high. In any case, the most important thing is:

Scrub the extra movement. If you’re using the Russian Reload grip the mag half way, use the base plate end to knock the spent magazine out, then a slight rotation of the wrist and some small movements will lock it in place. Just like signing your name.

Travis Haley chimed in on the thumb reload some time back, and posted a video of him demonstrating the technique. Travis’s bona fides with a rifle supersede my own by a country mile, so I’m simply going to state that while both he and the technique are good, I don’t think it’s a clear winner.

Said another way, if you invest an equal amount of time developing either technique, the results will come out negligible. Check out the video for a side by side comparison of the two techniques and some bizarre facial expressions. Ultimately, what we’re looking for is the ability to consistently deliver results. The AK can be run very quickly, but if you treat it like an M4 (or a FAL, or a Tavor, or anything else), it’ll muck you up.

Keep that in mind, mess with some of these techniques, and think about how your movement is helping (or hurting) your efforts.

As with any firearm, we want to balance speed, efficiency, and security.