Bad Practice: Knives and Guns and Cardboard, Oh My…. 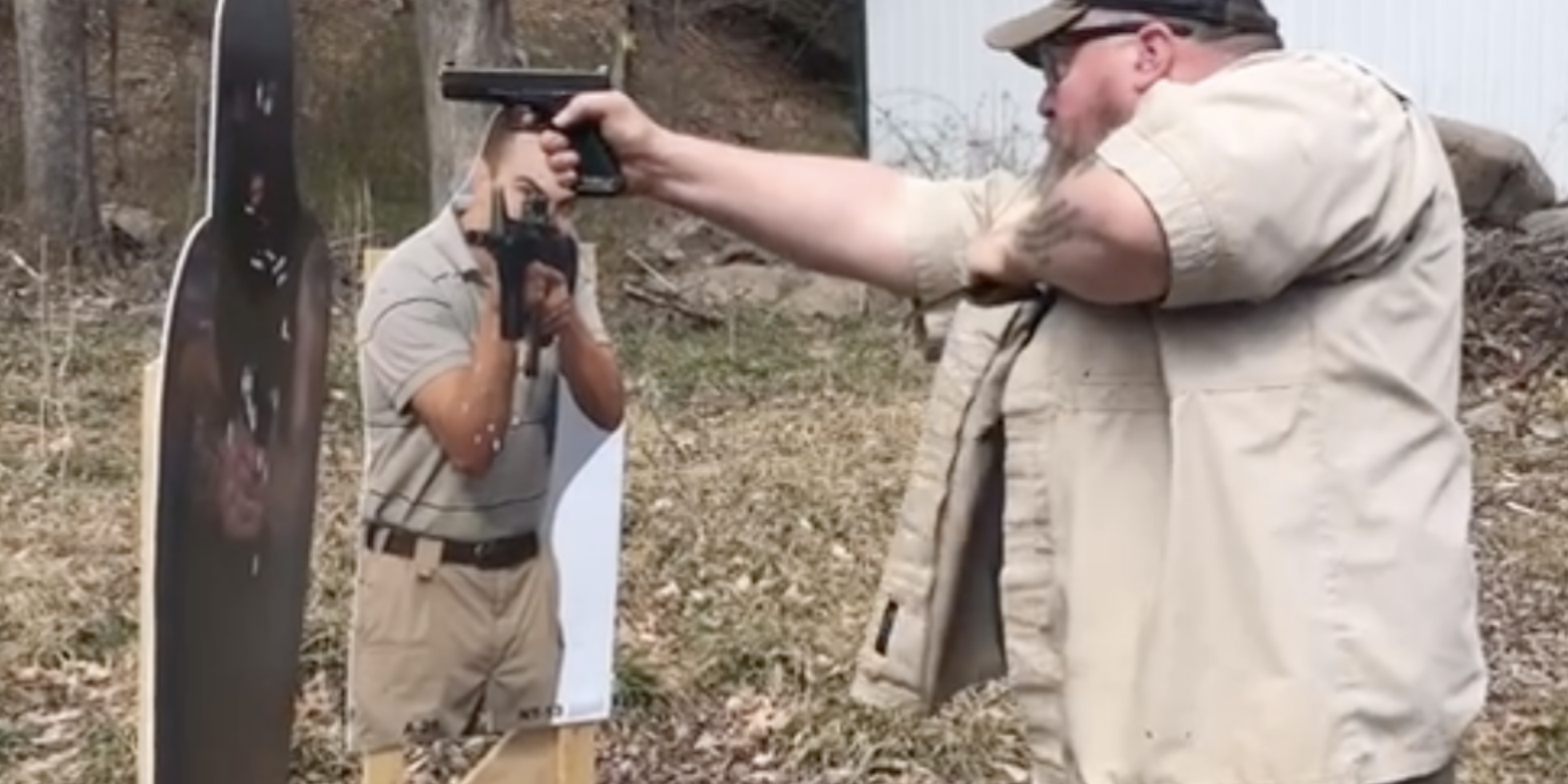 There’s some silly junk out there with guys training to use their knife and firearm in a close range fight – at the same time. Why is that bad practice?

Today, Tom Kier a Tuhon Master of Sayoc Tactical Group demonstrated a shooting drill that garnered some attention, including ours. In it, the presenter, draws a blade, thrusts it into the first target while drawing his pistol, firing from retention, then transitions to the second target, and then a third.

It’s one of those visuals that leaves you speechless, grasping for some contextual element to better understand why he’s training this way, and in the end, a lot of unanswered questions.

We don’t like dogpiling people for doing weird or irregular things, because without the full story, it’s a good way to end up with your foot in your mouth.

However, in some egregious examples, we can make pretty solid statements that certain things simply don’t work.

This is of one of those things, so while our goal is not to attack the man, we do question the methods – especially considering Tom claims to have been in over 500 fights (conservatively).

When demonstrating in the age of digital media, it’s often necessary to keep a lesson to 1 minute or less. This is the worst kind of disservice that the self-protection industry could be dealt, because apart from some very simple examples, *nothing* is simple. Everything requires some element of context (why you’re doing things the way you are, whether training or fighting), Relevance (why this is a practice worth integrating), and some sort of verification that it works consistently, and in what situations.

Demonstrating edgy or strange techniques can grab peoples’ attention, sure (we’ve had to default to this a time or two ourselves), but it needs to be followed up with a very clear set of defining principles that back it up. When that doesn’t happen, the audience is left guessing, or worse, trying to recreate bunk tactics that are likely to result in what Claude Werner has dubbed the “negative outcome”.

First learning point: Always try to provide context, even if you don’t think anyone will read or listen to it. You won’t reach everyone, but the ones you do will make the effort worth while.

Most conversations in the tactical community are splitting hairs over stuff that doesn’t really matter. When it comes time to discuss how best to carry a blade and a pistol for self-protection, it’s hard to do so without stepping on some toes, but here’s something that can’t be overlooked: Most people don’t have any actual experience with what they’re discussing.

So, if we’re talking about a guy claiming to have been in 500+ fights (and who claims to have never lost… which, yeah, nah… pretty comfortable calling BS there) who is teaching us how to stab people in the face, we need to know how many times they’ve stabbed someone in the face, drawn and shot two more guys.

I’m not interested in hearing how many drunks you’ve punched or put in headlocks while working as a bouncer, and hell, I’m even OK with this experience being only in training. We can’t expect to go around shooting and stabbing people in the civilian world and stay out of prison.

As mentioned, several on our team have fought with blades present under legit threat of injury or death, and we don’t say this lightly… Know the time and place for your weapons.

In the video today, a man draws a blade tip down (earth grip, or whatever), and thrusts it through some cardboard while drawing his pistol and shooting the target, then transitioning to shooting another contact range target. Let’s not get wrapped up in why that’s a weak way to employ that weapon, because our main interest is why the execution is less than the sum of it’s parts. Even if it was a good attack, it’s still a bad practice.

We discuss this ad nauseam in “Hard Lessons: Bring a Knife to a Gunfight“, but what we have here is a bundle of problems that don’t resolve this way under opposing force.

Let’s take a look at some bullet points as to why this practice needs improvement:

These points present a feedback loop:

If you commit yourself to drawing a knife in the context that it’s going to ‘clear space’ for you to get to your gun, you’re making some assumptions:

Now that we’ve covered some of the disadvantages from a tactical perspective, let’s discuss why conceptually, it doesn’t make much sense to train this way.

It’s often said that the knife is used to create space so you can access a gun. As said above, we fundamentally disagree with this. Especially in the Citizen’s Sphere of Violence, in which a ‘lethal force‘ situation might fluctuate with the resolve of the attackers. They might run when they see that knife, then grab a crowbar and close back in. Are they still a lethal threat while they’re retreating? Can they make the argument that YOU were the first to escalate force to lethal levels when you accessed that blade and tried to stab them in the face?

What we’re seeing represented is a longer, more complicated drill that incorporates a variety of individual skills. So far? That’s great. That’s exactly what we should do as we move from the basics to the intermediate and advance skill levels.

The problem is, we’re leaving half-solved problems on the table that prime us for prematurely giving up on one fight before we pick up the next.

Working an edged weapon problem in with a handgun against paper is largely a waste of time. It was absurd and widely lambasted when Lucien Black (VODA) did it, and it’ll be just as ridiculous if it’s Tom doing it. It can be added to the list of techniques that might work as long as the other person isn’t committed, such as defanging the snake, or the G-Wrap.

Knives, statistically, are lethal only about 8% of the time. So is giving one dude a stab to the skull going to be enough? How about if you’re shooting from that retention position? Where does it put you if you don’t have the desired effect?

Keep in mind if you’re going to a blade, there’s going to be footwork involved unless you’re able to use their own weight against them or you’re killing a sentry. When you start swinging or trying to get a solid stab in, you’re going to be be working against someone who probably doesn’t want to be stabbed. Within this 0-3′ paradigm, the distances isn’t going to stay fixed like it is in a drill.

The enemy is going to close, and retreat, and close again, making this “window” to draw a gun based on the space you created almost entirely theoretical.

As we often discuss with “non-contextual” drills (those that don’t translate to real life), they’re often to illustrate competency in a variety of tasks. That’s fine, but it should be to test skills that are contextually relevant (actually work in fights).

If we mix these two, we get a jumbled mess of half solved problems that we talked about. Knowing how and when to isolate skills that require thorough training (Edged weapons and force on force, for example) with those that simply demonstrate we’re competent (marksmanship) we tend to do neither very well.

Often times, we can find ways to train that enhance our ability to manage complex tasks under stress, and to his defense, Tom has a video where his son does just that – he boxes some targets for a few seconds before accessing a weapon and training his marksmanship under elevated heart rate. Again, all good.

Some things mix well, such as physical fitness and fine motor tasks (shooting, picking locks, etc), while others are like oil and water. No matter how hard you try to mix and shake, they never really blend together in a way that unites them.

When we talk about hand to hand, edged weapons, handguns, and long guns, they all address just a subtly different, but connected, problem.

The only thing separating this drill from being good training is opposing will.

So here’s the bottom line: You’re going to end up with training scars if you don’t isolate these skills for development, and then get to the gym and pressure test them. If you’ve never been in much of a fight, it is hard to explain just how fast the difficulty goes up when you’re outnumbered. By the time you get cornered by two armed men and a lookout (the non-contextual setup in that video), you’ve failed the awareness and judgment test, and been selected as a victim. Once it comes to fighting your way through the ambush, you need to have a clear-eyed view of what’s going to work, and what isn’t.

It doesn’t prove much of anything attempting it on cardboard. Assuming our goal is to present technical and tactical proficiency, demonstrations like this truly have to be conducted against an opponent who isn’t going to let you do whatever you want. Use your time at the range to focus on your range work. Show your hits – or misses – and make a plan to tighten up.

Then test your skill against an opponent to see if it validates. If it does, keep testing it. If it doesn’t, assess what you’re doing wrong and fix it.

After all, who is it you’re training to fight?

Lesson Three: Validate against a living opponent who is determined to stop you. If you don’t, your efforts mean nothing.