Bad Practice: Standing in front of your Shooters 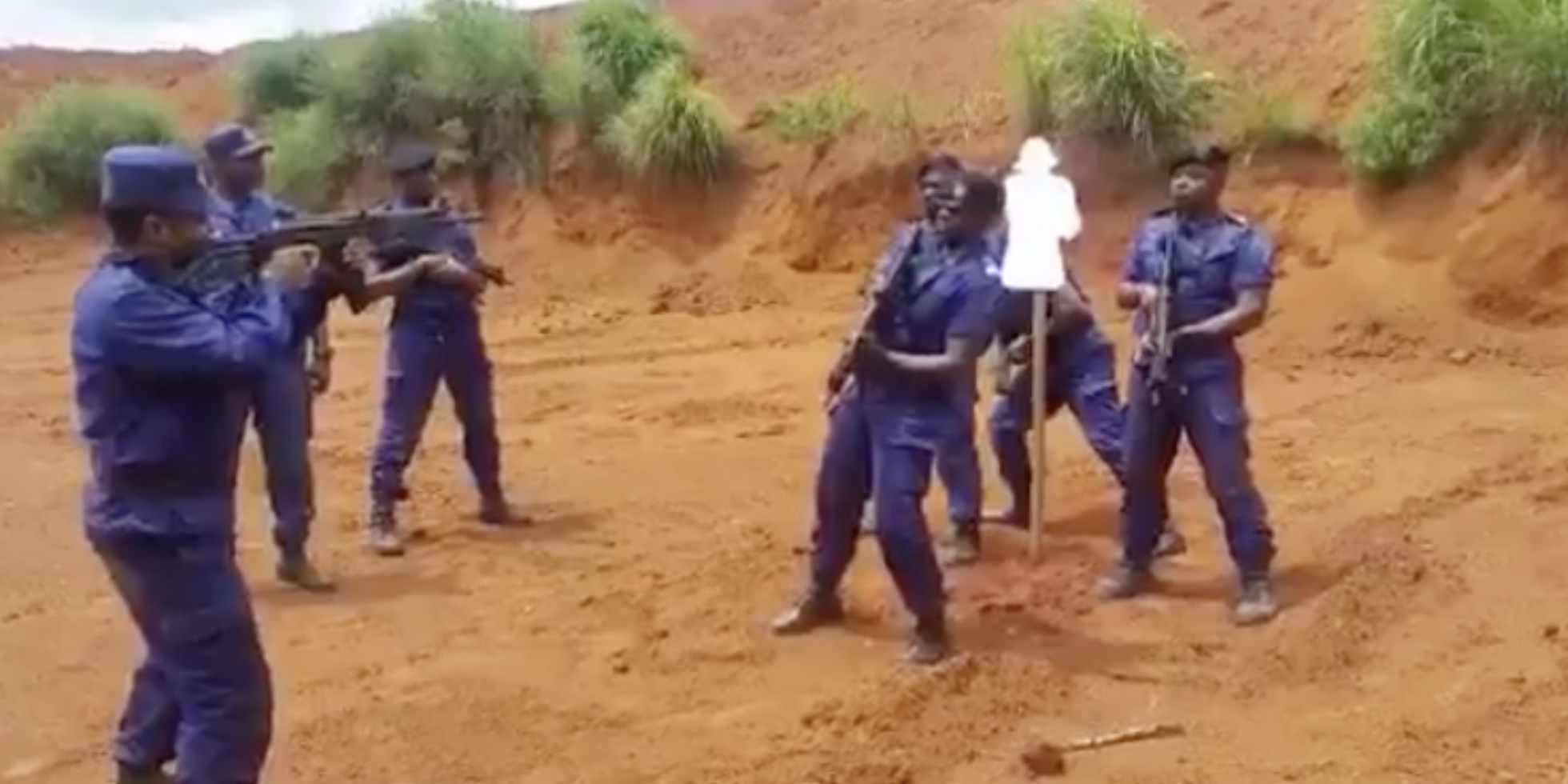 There have been a rash of videos lately from Brazil to Africa showing firearms training with guys forward of the firing line. What should we make of this taboo?

Often times we look at bad practice with a sort of reflexive ‘nope’… a habit which is magnified by the speed with which condemnation rolls in in the digital age.

We try to avoid attacking the people and focus on discussing why what we are seeing is poorly thought out. As such, we can’t so much blame the students for the instructor’s practice, so we’ll focus on that as we dissect this training session from Brazil:

Our pony-tailed student is a major tell as to the level of skill these shooters possess.

Watching this video, you can see he has to signal a range safety to come help him clear a stoppage. As we discuss frequently, behind loading, drawing, and firing a handgun, clearing a stoppage is an absolutely essential task that doesn’t get nearly enough credit. If you’re interested in why, we have a video discussing stoppages here.

Before we go on discussing why this drill itself is poorly constructed, we need to drag the well-beaten horse of “match the skill level to the course” back into the limelight.

As we discussed in the article linked above, it’s a failing of the student when they enroll into a course they’re not ready for, but it’s a failing of the instructor if they don’t recognize that a student is dangerously unprepared for the material. As often it’s tough for students to assess their level of skill, it becomes very important to try and ensure the students are in step with the material.

When we start doing training with friendlies ‘downrange’, we need to be absolutely sure they have the level of competency, maturity, and tactical acumen to do so safely.

We can’t afford to have a dude who can’t clear his own weapon pointing a gun at us or other students.

Now, with that said, this might be surprising, but this concept isn’t as awful as it seems at first blush. This drill just doesn’t do it justice and fails to match the instruction to the students level of skill, but if we’re honest, having non-hostiles in front or around us in defensive encounters is almost a given.

Despite the initial hate and “WTF” going on at every level, this drill fundamentally trying to teach some very important, relevant, and realistic concepts. So, while we disagree with what we’re seeing here in terms of the students readiness to perform the drill and some of the execution (which could be done far better), the idea behind this drill is crucially important.

So, what are we talking about? What is worth taking from this video and retooling? Quite a bit…

This drill, done correctly, could reinforce ALL of these points, all of which are important… especially to the citizen. So, think on that while we take a look at another example of edgy ‘friendly downrange’ training.

Before we move on to some solutions and ideas for training the important skills mentioned above, let’s take a look at another video that’s valueless. Truly, it’s little more than an edgy trust exercise.

This video has no context (why would your buddies be standing in a line like that? There’s no principal, there’s no skill being worked here that could be done without living humans downrange, etc).

What is the point?

That not all of these drills are created equal. This isn’t fundamentally that different, other than it’s obviously for show. There’s no movement to simulate a real shooting environment. There’s no muzzle discipline being reinforced. There’s no obvious purpose.

So whereas our first video was an example of having the right idea, poorly executed, this is the wrong idea, which should never have been executed.

Now that you’ve got eye-Ebola, let’s discuss how we can train for no-shoot/shoot discrimination, movement and muzzle control with friendlies downrange, and work on some force on force.

Training For the Fight

This should go without saying by now, but the absolute, non-negotiable pre-requisite to this kind of training should be solid fundamentals, starting with the rules of gun safety up.

The easiest litmus test for whether or not you’re ready for working these kinds of drills is this:

Do you muzzle people on accident?

If yes, full stop. To get the most out of working force on force, you’re going to want to have mastered some shooting fundamentals, first and foremost of which is ‘always knowing where you’re pointing your weapon’.

When your’e at the range, practice strings where you check your fire. If you’ve got a training partner, this can be done by having them orient targets without your knowledge, and using targets that vary or are questionable, or those that can be configured to change the threat and still require some judgment. Work on them at varying distances, as well. If you’ve got access to a range that has programmable targets, many have a no-shoot/shoot function. If you’re working something else, get your boys to set up the targets while you load magazines or do something other than see the way they’re setting them up.

Stack targets in front of one another, if you’ve got enough stands. This will force you to consider over penetration and shot placement.

If you’re doing things on the cheap, colored paper plates can work well as a simple, inexpensive drill. Use certain colors for no-shoot, other colors to denote a string of fire (controlled pairs, or the like), and others to signify vital areas. These are very easy to stack, as well, so you can make a useful training aid without much more than a couple target stands and a couple dozen colored paper plates.

To really drill on these situations, there’s nothing better than facing off with an actual living human being who doesn’t want to get shot. Without a doubt, the best way to get this experience is find a reputable instructor who teaches force on force with Sim/FX. That’s the gold standard in training, and there will be a day in which people who aren’t training with Sim/FX might as well be using a cup-and-saucer grip on their service revolver. Especially if the class has no script and good role players, you’ll learn a lot about yourself integrating verbal skills, physical tactics, weapons handling, and judgment. The chief benefit of Sim/FX is that the pistol look and function exactly as your normal carry pistol, give you a physical sting if you get popped, all while retaining the exact manual of arms as the real firearm.

If you can’t pull that off, SIRT guns can be a suitable alternative if you’ve got a training partner and structure to work in. SIRT won’t leave permanent marks from which to learn from, but if can still be used to work angles and tactics.

Barring SIRT, Airsoft can work as well. Yes, we know, people laugh at Airsoft, the bad tactics, and the suspension of disbelief that goes into it, but in the hands of dedicated people using good tactics, Airsoft can give you some realistic feedback regarding where you’re at, especially if you use a high quality replica of your carry gun.

If you carry a firearm for self defense, you need to know the feeling of putting someone at gunpoint. That’s not PC. It’s not something you’ll hear in the NRA’s curriculum, and most importantly, we’re not saying that needs to be a loaded and chambered pistol pointing at your instructor.

With that said, you do not want the first time you draw down on a person to be your first time drawing down on a person. There’s something very real and very serious about the act of putting a bead on a human, and a lot of students have a very hard time with it the first time. We’re trained, and continue to train, to keep our muzzle OFF anything we’re not willing to destroy. That’s absolutely crucial, and it’s a rule for a reason.

We have discussed before that while your defensive encounter might be your first time pulling a weapon on a person, it’s likely not the first time that person has had a weapon pulled on them. They will not suddenly become compliant because you’ve upped the ante, and if you’re nervous or not committed to your action, it’s going to be absolutely obvious, and you can expect they’ll call your bluff.

So, be safe. Be sane. Know when you need to be obeying the fundamental rules of firearms safety (hint: when you’ve got a live weapon), know better than to point a live weapon at another human, but don’t shy away from finding workarounds like Sim/FX, SIRT, or Airsoft.

There comes a point where we’re no longer discussing just marksmanship, but fighting. Know the difference, so you don’t end up like the guys in these videos… the laughing stock of the internet.