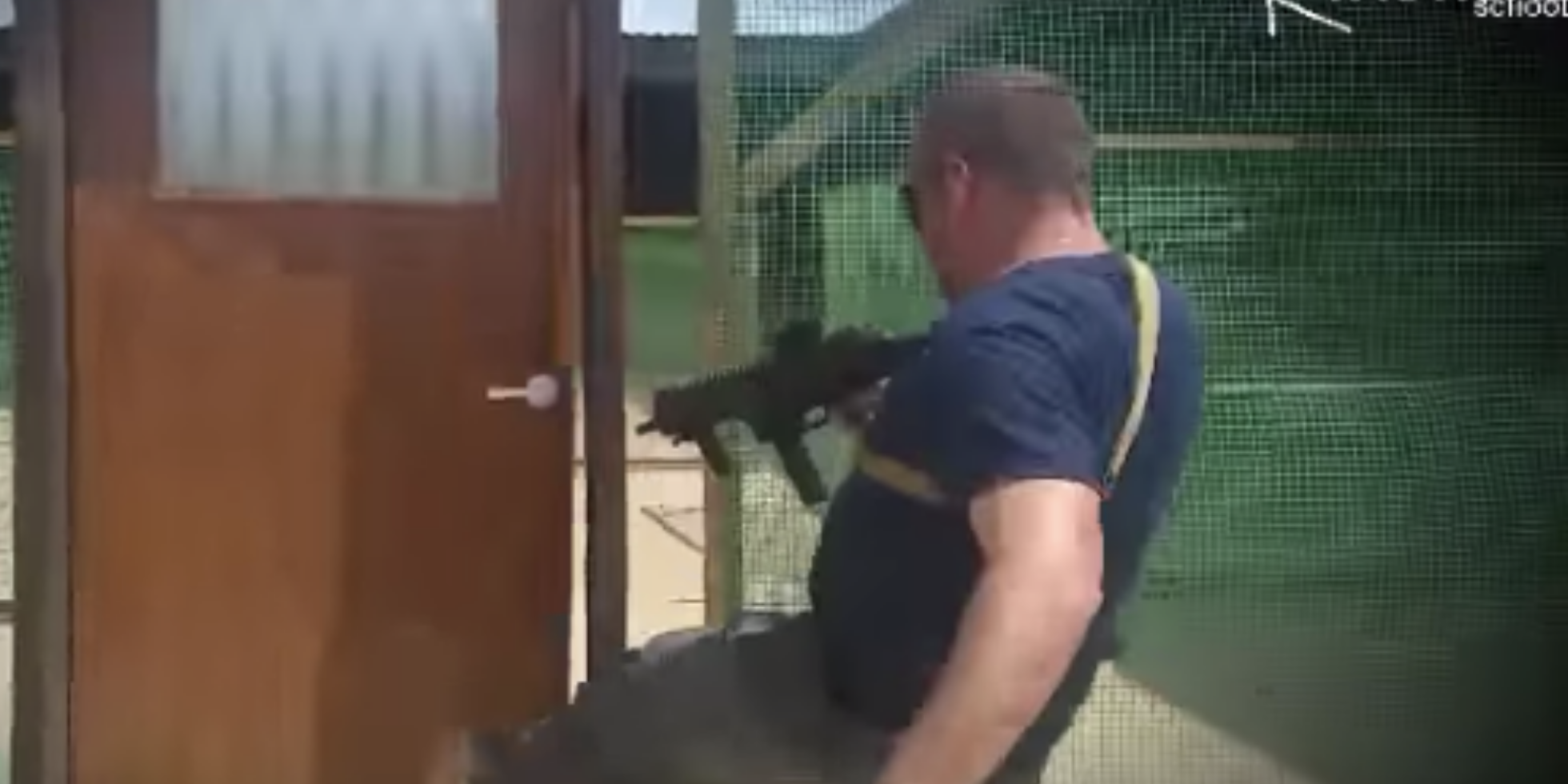 There are some practices that are deeply rooted in problematic tactics. We look at the “Tactical Wobble” today, and why it’ll get you killed.

Earlier this week, Pacific West (Israeli Tactical) released a video of their students driving around shooting out of trucks, and then kicking the weird into overdrive by toe-tapping a door and wobbling their way through a doorway to engage a target. No, it’s not an April Fools joke, though we initially thought it might be…

And since emptors have utterly lost the caveat, your friends here at ISG have your back.

On this particular topic, it’s one thing to go full-tilt hostile with the rest of the gun media groupthink, but as is our style, we’d rather discuss what we’re seeing and *why* it’s a bad idea. That way, any shots fired are grounded in a well-explained foundation that illustrates more than just opinion.

So, while we could try and describe the weirdness,  that doesn’t do quite as much as just letting you see the video for yourself.

Since the good folks at “Israeli Tactical” pulled the original video (presumably because even people who don’t ‘gun’ very well can see their stuff is all sorts of ‘et up with dumb’), we’ll have to host a link to videos mocking it on our Facebook, but we’ll use an instructor demonstration here. Here’s why: The students are just doing what they’re told. The instructor wants your money.

This is also a really good time to piss some people off and say if you’ve ever spent your money training in Israeli *anything* related to fighting, it’s dollars and time that you will never get back. We like bullet points, so here are a few:

Bottom Line up front: Israeli martial arts and gun handling – at least as taught in the U.S. to citizens – have their heads lodged firmly up their asses, we don’t mind tellin’ ya.

Sometimes when we start these articles, you do so with your head hung at the absurdity of the firearms industry and want to say “Just… just watch the video.” Once you’ve seen the persons reaction, you kinda have an idea where to start.This one gives us a gift wrapped in all the absurdity, and that is we can just throw the baby out with the bathwater and start from the beginning.

We’re going to discuss several things from Israeli Tactical School’s promo, and use images from their video. All images are theirs and they retain the rights to them… as such we’ve left their emblem so you know who to avoid.

So, let’s start at the very beginning, and break it down.

There’s a way of carrying your handgun called Israeli Carry – named because Israeli’s carry with an empty chamber. Despite numerous examples of why this is stupid people still continue to carry condition 3. Most of you probably already understand that time is of the utmost importance when lead is flying (so wasting an extra couple of seconds during an overtly aggressive action that’s likely to draw gunfire to you isn’t smart), so we won’t belabor this. Suffice to say, this is the headwaters of the mistake juice that Israeli Tactical is swimming in.

This is one of those topics that we don’t really bother with. Physiology being what it is, there are subtle differences in how we stand and move. *However*, when you stand like a peeing 5-year-old while shooting, you fundamentally wreck your ability to manage recoil and, more importantly, take a hit if someone closes in on you.

Rocking your body over your heels like this is a postural weakness. Think “nose over toes”; the reason is if you bend at the hips and knees (rather than just the knees) and lean *in* to the recoil, your body does a better job of absorbing it. The further rearward your torso’s axis, the harder it is for your core to compensate, and thus the more that recoil is going to push you around. If someone (say, in a CQB environment) hits you from an angle you weren’t expecting, it’s much easier to fall if you’re not leaning into the hit. You want your body to zig-zag, like a spring. This loads your body for explosive movement. It also puts you off balance if you move like that, and you’re more likely to slip on something if it’s not a clean range.

You can start to see this in the thumbnail of the video above, but it continues throughout. Our practitioner here doesn’t waste an opportunity to rotate his gun so that he can… what… check for malfunctions? See if you’re at slide lock?

This John Wick stuff is for the birds, guys. If you’ve got enough hands-on with a firearm that you’re ready to run into a structure to smoke check some knuckleheads by yourself, you should have enough rounds downrange where you can feel an interruption to your weapons operating cycle.

Flinging your pistol upward, or rotating your rifle inboard does nothing and let’s call it like it is: if you can’t feel an interruption in the operation of the weapon, your nerves probably aren’t going to allow you to do much of anything about that stoppage. This is why we’re big advocates of stress inoculation through force on force.

Not everyone gets the experience they want in the ‘real world’, but Force on Force can get you close enough to where you can solve these problems without needing to check your weapon to see if it’s still there after every volley of fire.

We want our movement to be deliberate, controlled, and necessary. Keep in mind that in confines like this, targets aren’t going to just stand still and wait for you to come to them – especially if they’re professionals. They’re going to be looking for the gunfire, and using similar tactics to yours. Either way, leave the Hollywood stuff at home.

We talk about vehicle bailouts a lot. Vehicles are bullet sponges – if you start taking or receiving fire from one, you need to move away from it as soon as you’re able. They don’t stop bullets, and it’s far more important to NOT get shot than it is to shoot someone. Get yourself away from the vehicle! Once it’s done facilitating your ability to rapidly move around, get as far from it as you can. If you have someone who can cover you while you grab whatever gear you might need need – do that.

If not, be looking for the next spot of cover.

The goal with this kind of bailout is to keep some pressure on any attackers while better weapons are brought online, or critical stuff is recovered. Short of grabbing kids, though, most of the time bailing out of a vehicle is under pretty nasty circumstances.

It doesn’t stop there, though, this gentlemen’s use of cover is awful. Shooting cardboard targets one at a time, eh. OK, whatever makes you feel neat. Against living people who:

b. Want to kill your face

This guy is doing a lot wrong… Here’s what and why:

Anyone who’s ever kicked a door can tell you it’s a lot different on TV. You’re going to need to do more than give it a little tappy with your big toe. Further, the farther from the strike plate that you hit, the harder it is to bust that door off. You want to clobber it where it’s weakest – at the hasp, near the wall. The farther you are from the door’s moulding, the more the body of the door absorbs the impact.

Here’s a big hint: Have you tried opening it by turning the knob with your hand? You can just let it swing open if so, and start biting off smaller pieces of information.

If you’re one dude against ALL the cardboard, consider that the harder you kick that door, the more likely it is to come back hard as you’re making your entry into the room.

Doors often lead to hallways or vestibules that you really don’t want to race into, especially if you’re alone. Kicking it wrong, hard, and then rushing into the doorway to stall for a second and deliver some lead is a terrible idea. If you can’t make a proper aggressive entry, try opening that door with your hand (the way God intended) and if that doesn’t work, then look at options to bust it open.

Once you do, pie of sections and see if you can’t catch some knucks slippin’ and trying to run up on ya. People categorically suck at moving and shooting, so move in such a way where you can take some angles, dominate them and disallow anyone to run up on you.

Trapping yourself in the doorway exposes you from outside security (which is going to flank you and put you in the L for disposal) *and* whoever’s inside.

This stuff isn’t a game, do it like these clowns and watch how fast you transition from a really cool smart guy who trains all the time to a spoiling bag of tissue.

Last of all comes the tactical wobble. Not only is it tonights main event, but all the other issues play into why this is just stupid beyond belief. Let’s use some bullets of our own:

This is a deadly serious topic that is being used by all sorts of trainers to instill a false sense of competency in their students. Look, you absolutely HAVE to verify with Force on Force. It’s hard, it sucks, no one likes getting shot. We get it. Furthermore, no two situations go the same way.

The lessons of what works and what doesn’t though will help you really assess the practice of others you might consider training under.

We aren’t perfect. We often post videos with blatant mistakes to see if people catch them, and if they do, can they express why it’s a mistake, or diagnose what other factors might be going on. A recent example was the bailout video; in it, one of our crew has a broken thumb on her right hand. Her shooting with the pistol is done lefty, and the rifle righty on account of it and it shows in her use of cover.

The people who do, who attempt to wow you with the production value, the speed, and the notoriously absent lack of verification (either steel or images of the targets)… well, do us a favor, do yourself a favor, and take them with a big lump of NaCl.