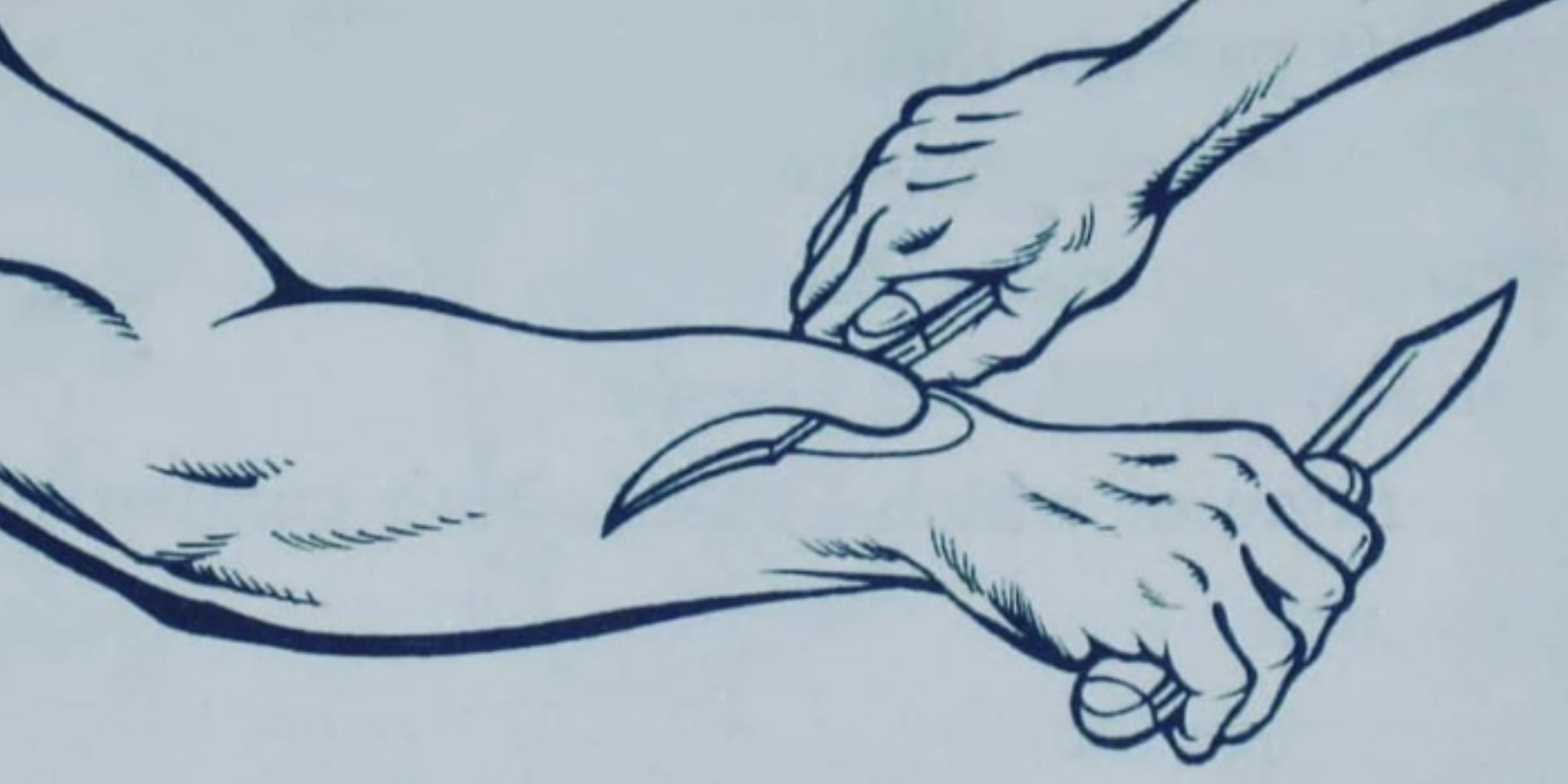 In something that should be self-explanatory, we tackle the topic of why you should -under no circumstances- train specifically to maim other humans.

We’ve drawn way back on our “Bad Practice” series because we would rather focus on instruction that reinforces good practice, rather than highlighting the bad all the time.

…But then we find things like “the filet”, which was being presented to an online audience with little to no context, and only the following description:

The fillet. In our training it is sometimes preceded by a hack.

Besides altering your attackers behavior, it makes them more easily identifiable to the police after.

After a mind-boggling back-and-forth discussing exactly why this is a bad idea, and should never, for any reason, be taught, we were met with what amounted to a shrug and a “eh, it works for me”.

As is almost always the case when someone says that, no, it doesn’t work for you or anyone. Here’s why.

First and foremost, we have to come to a common understanding of how the brain works under stress. Your skin basically has tiny receptors in it that are responsible for your sense of touch. Since we like going overboard with knowledge, in hairy skin, you have 4 basic cutaneous receptors. Here’s what they are and how they work:

If you’re not interested in the physiology involved, here’s the takeaway:

Sensations require electro-chemical impulse and don’t all work at the same time, or in the same way.

When you’re over-stimulated, your nervous system acts like a crowded highway, and the ’emergency vehicles’ (autonomic functions and efferent nerve signals) get the right of way.

Said even more simply: Your sense of touch suffers when you’re under stress or are being injured.

Relying on cutting a person superficially, in addition to being stupid for other reasons, probably isn’t going to have the desired effect, because that person isn’t feeling pain or sensations in the way they normally do when they’re in a fight… and that’s assuming they’re not drunk, or on drugs.

Some people prefer anecdote to science, so here’s are some accounts of something we hear all the time in stabbings: “I thought I was being punched”. And here’s a link to another decent article discussing that in isolation.

This is so common that it’s easy to cherry pick quotes. We hope that between the scientific explanation and the anecdote, you can take this conclusion away:

Being stabbed often presents as simply being hit.

If that’s true, we need to at least ask ourselves: If we’re in a fight, should we *ever* assume that using a blade will be a deterrent? Should we expect that trying to intentionally cut someone in a specific way will have the desired effect?

As we discuss in “Bring a Knife to a Gunfight“, the overwhelming majority of knife wounds do not result in death.

So, to the question above: we say no. While it’s possible it *could* work, there are still a lot of reasons not to try and do this.

You probably hear us mention “Spheres of Violence” all the time. It’s a core concept in the ISG framework, and it probably seems a little distant for most people. The advice and method here are a perfect example of how it works and why we talk about it.

The author of this teaches this method from a police background. If he cuts someone and they run off, there’s almost a zero percent chance in America’s current political climate he’s going to face repercussions from filleting a guys arm.

The everyday citizen, on the other hand… well, let’s back up a bit.

Assuming you’re not just out to practice knife stuff for the sake of knife stuff, you need to understand when you can use a knife as a weapon.

Put as plainly as possible: It’s no different than a gun.

You need to be able to clearly articulate the following:

This isn’t a “pick and choose” event, either. You need to satisfy all three of those requirements if you want to have a chance of walking away from the encounter with your life semi-intact.

So let’s give this some further thought: IF a guy is able, has the means, and has the intent to kill you, and you draw a tool of lethal force, why in the world would you attempt to wound that person intentionally?

If they MEAN to kill you, you need to consider that in all likelihood, they’re actively TRYING to kill you. That means they’re going to strike at your vital areas.

Trying to peel back a non-vital patch of tissue that may or may not work depending on “blade sharpness, clothing, etc” while someone is trying to gut you or stick a blade in your neck… well, it doesn’t take a whole lot of explaining for most people to see why this is mind-numbingly bad advice.

The cherry on top is that if you do this, the police will be able to identify that person later.

As we often say, police aren’t your friends. They’re impartial gatherers of fact. If you call them and bleet “I was in fear for my life, so I filleted a piece of skin off this guy and he ran away”, what do you think that does to your credibility when satisfying the three points above?

-If you have the ability to selectively cut a person and they ran away, were they likely a lethal threat? How can a prosecuting attorney turn this against you?
‍
-If the person runs away after being cut, how serious was the altercation? Again, what will the prosecution tell the jury regarding you carrying a knife, your willingness to use it, and the condition of the ‘victim’?

While it’s certainly possible that those things can (and do) happen, and while was still being a true lethal force altercation, we absolutely, positively shouldn’t train as if that will be the case.

As well, while this is an “umbrella” of force law as it applies to the citizen, it’s to say nothing of local laws regarding use of force and edged weapons.

Before anyone rushes to judgment on us calling this out, we eased off and gave the author a chance to explain the circumstances. When we did, he simply doubled down on the “you’re making assumptions” narrative without providing *any* context. Don’t wear the juice, fam. It’s ok to be wrong. We’re wrong on occasion, too. Just own it, fix it, and move towards better practice.

As we often say, you need to do three things when looking at ‘expert’ advice:

In this case, I think we can vigorously check no, on all accounts.

We were looking forward to an explanation and discussion on how this approach to a very serious situation could make sense, but in the end, it really just can’t be justified… legally, technically, or contextually.