Painting your Rifle: A Guide 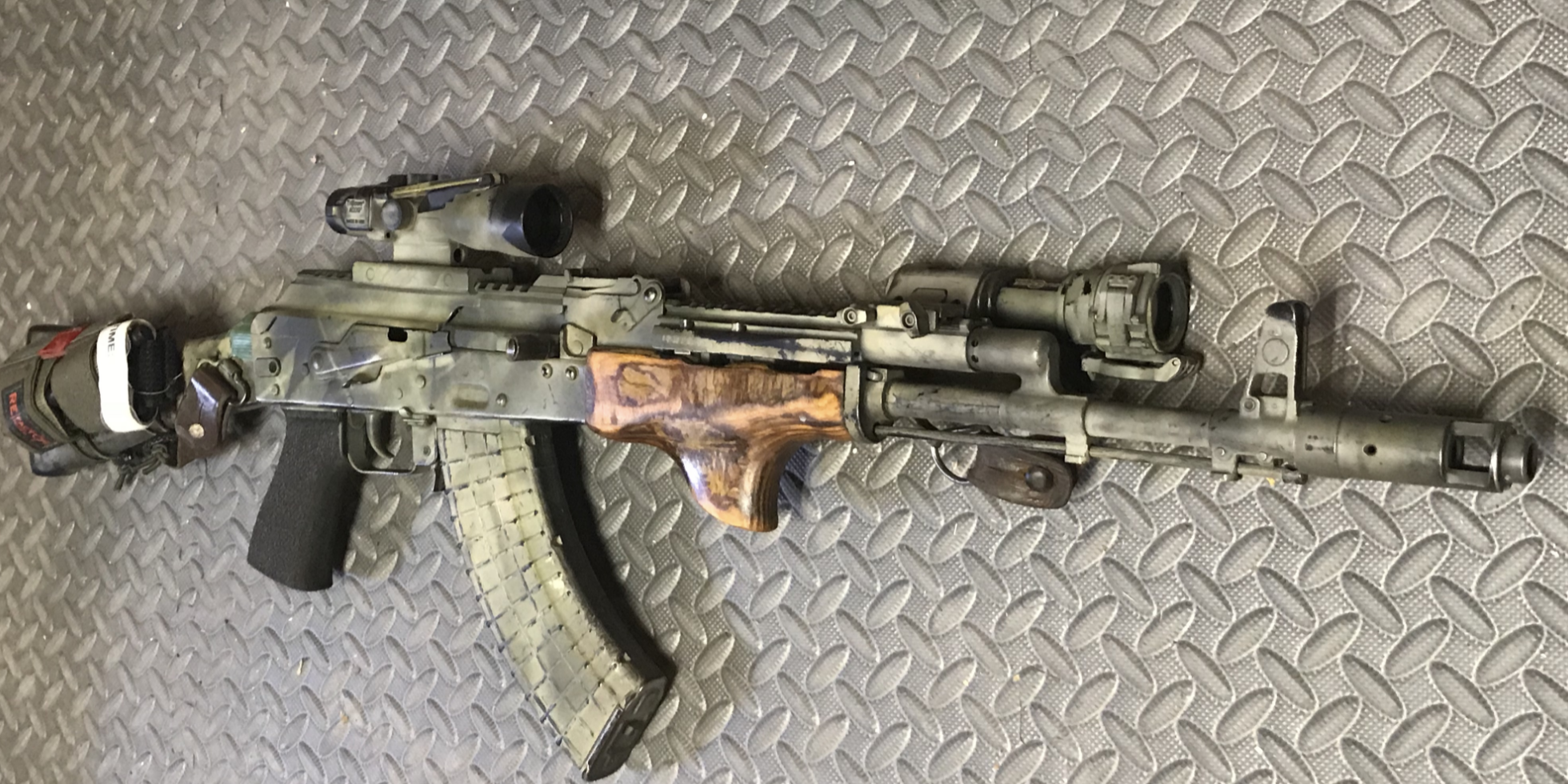 Painting your rifle is more than just a move to emulate the cool guys – it actually has some practical benefits. Learn more about how to set it up right.

We had a request to do an article on rifle painting, and it’s been long in the coming.

Painting rifles has become a fad after years of observing SOF doing gangster stuff with rifles coated in worn krylon. It’s not all for the ‘gram though – painting your rifle actually provides some serious benefits, even if you’re working lower signature operations.

It’s immediately obvious someone is holding a rifle when they’ve got a black, rifle shaped blob in their hands. This is true whether you’re in an urban environment working out of a vehicle, or in the jungle, desert, or arctic.

Breaking up the outline of the rifle by hitting it with some colors creates some uncertainty that, at rifle ranges, can buy a few seconds of IFF (identify friend/foe) or target identification on behalf of whoever might wanna glass you… by the way this won’t work on drones.

So it might not be a major difference in the long run, but not looking immediately hostile in an urban situation (especially as a citizen, who might be illegally disarmed if they display a rifle) is every bit as important as not having a big black tool hanging off your body in front of your effective camouflage.

Now we’ve discussed some of the why, let’s discuss how to paint your rifle.

The first question is deciding what paint to use, and what colors fit your location the best. There really aren’t any amazing choices since Bowflauge left the market, leaving mostly krylon and other spray on options. Bowflauge had a unique characteristic of actually deadening the reflectivity of the rifle under IR/NVG – huge bonus… but, it’s not longer made and the remaining options – to the best of our knowledge as of the time of this writing – are all pretty well equal. The only real concerns are thermal; don’t try and paint it if it’s too hot or cold, or too humid. You want a nice 72 degree day that’s dry.

So, determine what colors you want to use, buy 3-4 cans, from light to dark, and make sure your rifle is dry, vulnerable areas (such as optics, bolts, etc) are taped off with masking tape, and assemble some foliage or patterns you’d like to use. There are many options, from cyclone fencing to mesh laundry bags, but I typically use natural patterns. The main reason is that people really aren’t going to see much of the detail, so going overboard on your pattern selection and work is really kinda just playing at lookin’ cool – and it works. There are some really neat patterns. They just don’t really work that much better than anything else.

So, tape off your lights, optics, and bolt. Find a decently ventilated, isothermal place and let’s get started.

Step One: Base layer

The base layer should be the lightest color. I’ve seen other articles out there that say it should be the darkest, but it’s far easier to create contrast going from lightest to darkest. It also makes sense if you’re using natural foliage as a template.

Get your rifle set up in a way that you can spray the layers on from between 1-2′ away. This will keep it from getting runny and creating little pockets of slow drying paint. If it does run a little, it’s really no big deal… it isn’t the Mona Lisa, and if you really use your rifle, it’s going to need touch ups from time to time. NO finish short of a baked on permanent job like Duracoat will hold up to long term handling. So don’t worry too much. Besides, wear spots make it at least look like you work.

Once you’ve got the light colored base layer down, let it dry. It should take a couple hours at most.

Find and lay out your ‘stencils’ that are light colors and paint some swaths of light green (or light brown, gray, blue, or red, depending on your environment). At this point, we won’t be painting over anything, we’re just creating the background on which the light color aspects of the paint will rest. Spray a few streaks on either side in various widths and lengths, and start setting your stencils out. Once this coat is dry, we’ll start creating the pattern that will ultimately define your rifle.

Again, this one is a fairly ubiquitous ‘woodland’ pattern, similar to what you’d find in the old BDU’s or the newer OCP/Multicam. They work well for general environments, and also again, we’re not exactly trying to match the rifle to our clothes, as you might in the military.

The goal is to get people to say “what’s he got?” for just a second longer than they might if you jumped out the whip holding an evil black rifle.

The medium color should be similar to your light color, but in a slightly darker shade. At this point, we want our lighter colored foliage laying over top of the light color paint that’s dried. We’ll do similar to step two, and paint some swaths of our darker shade over them. When done right, this will make those light colored patterns similar to what they are in nature. For example, your light green is your grass or leaves.

When we paint the broad bands of dark green, those patterns remain, but we use darker foliage, such as sprigs of cedar, or fir boughs, or pine needles that are of a darker green.

Once we finish with that, we move on to our darker colors, taking care to let our light and medium set and dry.

In the same way as before, paint your darker bands on the rifle keeping the foliage with its previous hue. The pattern should really be taking shape by now, and starting to emerge as a broken pattern that has both depth and detail, without being too focused on the nuance. Our darkest bands will be things like wood and twigs, and they should be all but indistinguishable from the medium hues if you’re not up close. We’re looking to break them up with bands of lighter colors so that it creates depth and uncertainty.

By now you the project should largely finish itself, but before your finish, take a moment and lightly dust the rifle with black paint from about 2-3 feet away. This will deaden the color a little, and give it a bit of subtlety. You might not want to do this, but the ‘fresh’ color on the rifle can be pretty bright, and I find that dusting it with black paint makes it stand out a little less.

During the Rhodesian war, the anti-communists would sit in one spot and wait for the sun to move across the sky looking for the glint of exposed steel. As wars drag on, the careless fall by the wayside. Dulling the reflectivity of your weaponry can make the difference between giving yourself away, and staying out of sight.

Once we’ve finished with this, we just need to let it set, and remove the tape from our optics and vulnerable areas. After a few hours, you should be able to safely handle it without getting paint everywhere, but you might leave it overnight, just to be sure.

After doing this, it might be tempting to do your pistol or something as well. If that floats your boat, go for it… but the guys rollin’ with FDE pistols in concealed carry holsters are kind of missing the point. Keep in mind that the camo isn’t going to confuse much of anyone if there is lead flying, and if your pistol is out, chances are it’ll be pretty obvious what you’re doing. Personally I don’t think it’s all that useful to paint the sidearm, but there’s really no harm.

However, be EXTRA careful when painting pistols and shotguns. Shotguns especially have very finicky extractors. The Mossberg 5XX series in particular. If you get particulates in there, it’ll stop grabbing shells and make you look bad in a fight. If you’ve got an external extractor on your pistol, save yourself the trouble and either tape it up or just don’t paint it.

Rifles, to the best of my knowledge, are pretty well immune to paint. I’ve never seen one gummed up or slowed down by paint, but optics are vulnerable. Especially if you’re using dual illumination, like on the ACOG, make sure you don’t get paint on the fiber optics or lens.

A final word – if you need to clean the paint off, non-chlorinated brake cleaner works wonders. If you’ve got a hard-ass armorer who ain’t touching that weapon until you have it black as the day it rolled out of the plant, hit it with some brake cleaner. The paint will fall off.

Again, don’t let that stuff touch your fiber optics or lenses. It can wreck them pretty hard, and especially if you’ve got a $1300 optic on your hands, you really don’t need that kind of problem.

So that’s it… it’s an easy task that’s pretty low risk, but if you learn some of these lessons before you set to work, you’ll have a better looking rifle that does a better job blending.

Special thanks to JT B.