Level Up: Reading The Sky 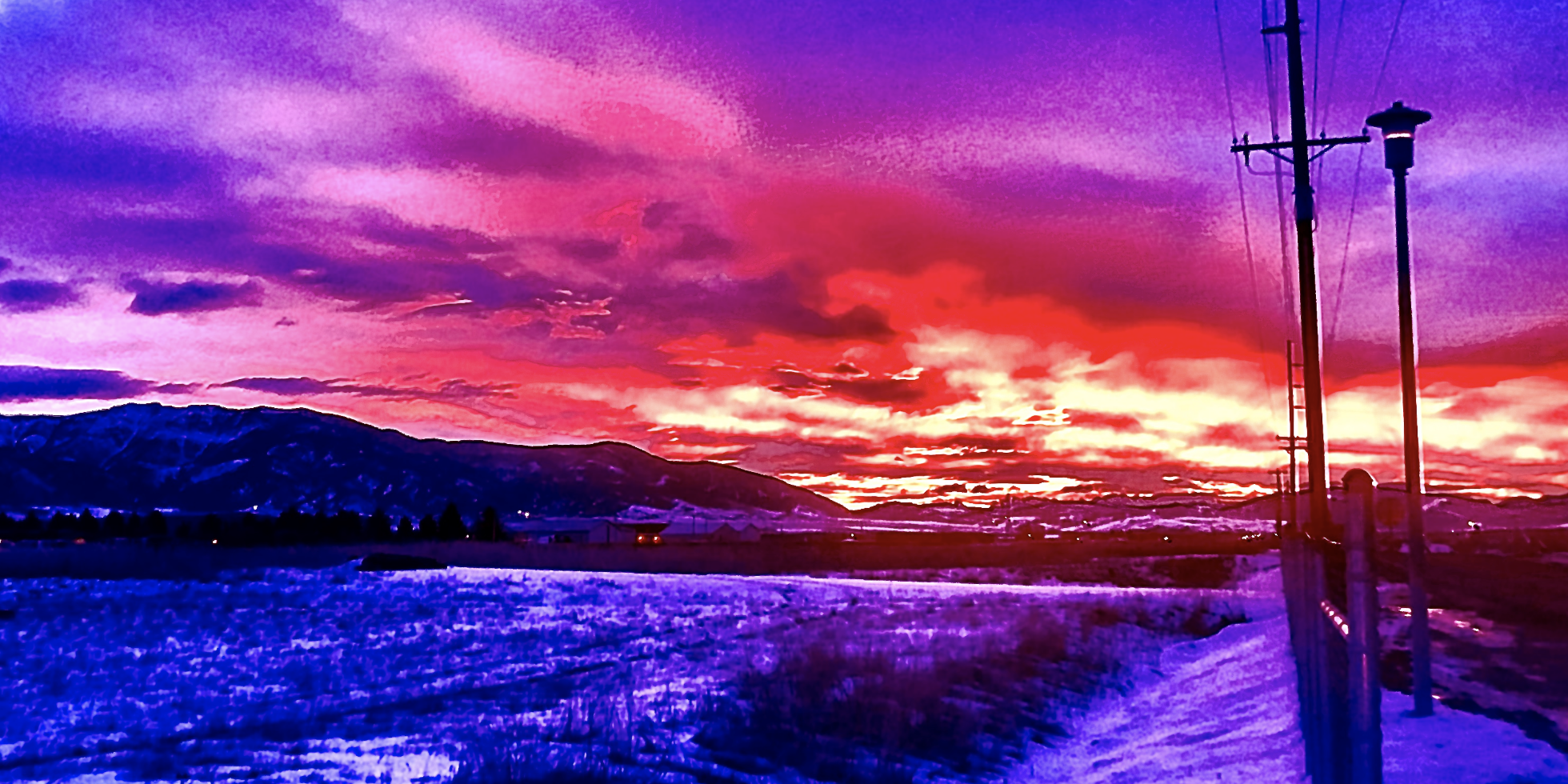 Building on Cloud Genera, we discuss some of the folklore behind forecasting weather and signs that signal weather changes. Join us to read the sky.

In this series, we will relate earth sciences to the ISG community to further our understanding of how the Earth and Sky work together. A deeper understanding of this can help you predict weather for route planning, understand the ingredients for severe weather, and help you plan for everything between a weekend getaway and natural disasters.

The Inupiat People called the Earth and Sky “Nuna and Sila”, and they were said to have a soul. As some of the worlds most resourceful hunter-gatherers, the Inupiat survived on a deep, cultural understanding of how the earth and sky worked together to change the environment.

In this article, we’ll be discussing how this folklore relates to some basic principles of meteorology, and how the shapes of clouds and colors of the sky can help you determine not only what’s happening now, but what will happen in the future. As it happens, some of it is surprisingly accurate and useful.

There are a mess of these old colloquialisms, and you might be surprised to find there is some science behind them. While they don’t fully explain what’s happening or why, they’re observations that made life easier. Used in conjunction with some other observations, they can be very useful.

First, let’s make some of the science plain language:

Weather is all about the exchange of hot and cold (large scale differential heating, to the science minded).

To make these terms less ambiguous, we can say that -129 – +134 degrees Fahrenheit is the full range of temperature on Earth. We consider “warm” air is around 80 degrees F, whereas “cold” air is around 40 degrees F. It’s important to know that these temperatures are always relative to one another.

As these Air Masses move, the cold sinks and acts like a plow, throwing warm moist air upwards in the atmosphere. As this happens, that warm air – under less pressure as it rises – can expand and cool, where it condenses into water droplets.

The strength of this process determines whether we have simple cumulus clouds, or full on, mid-western style convective complex. In this article, we just want to illustrate the basics in a way that you can take to the field and use to make reasonably accurate predictions. So, let’s talk a little about ‘Fronts’.

A front is, in essence, a moving boundary across which a gradient is present. That means that on one side of this imaginary line, dense cold air is moving equator-ward, while on the other, warm moist air is moving towards the poles. While there are a few different types of fronts, the important thing to think about is that they bring change, and they move at various speeds.

More important to us right now is understanding a couple crucial aspects of fronts:

Warm fronts typically arrive first and go through a progression of:

2. Warm, with winds from the south.

Cold Fronts typically arrive with the weather, and a wind shift from southerly to westerly.

Keep in mind that the winds are one of the most difficult – and useful – ways of detecting changes in the weather. This is because terrain plays a *huge* part in wind fields; mountain and valley breezes, on/offshore flow, et cetera all are ‘small scale’ winds that you can easily confuse.

As a general rule, if you’re looking for verification that the winds are telling you something, look up – as you go up in the atmosphere, warm air veers and cold air backs (picture a speedometer, and pretend it’s the wind direction: veering would be accelerating, backing would be braking). If the winds above you are veering, the atmosphere is warming with height and is probably pretty stable. If the winds above are backing, and becoming more southerly, there’s a good chance a front is approaching.

This is a simplification, but used with more information, we can make some pretty simple, reliable predictions… especially if we have weather data like satellite or radar.

Look at the images to the right: If you were in fort Worth at this moment, you’d be dealing with southerly winds bringing warm, moist air up from the gulf. You can see the leading edge of snow moving into western Kansas – we can assume thats the cold, polar air we discussed.

Dark clouds don’t always mean rain. If you can’t see your shadow, they’re just making the light diffuse because they’re higher in the atmosphere. That’s a good sign you’re in the last few hours of a warm front, by the way. Usually the weather will turn within 4-12 hours.

OK, so let’s discuss some of the sayings the old timers used to forecast the weather without really understanding the science… then let’s break it down and discuss whether or not it works. First, here are a few ‘general’ rules of thumb:

These are some extremely basic principles to keep in mind, and they need to be meshed with an ability to read the clouds. For now, let’s focus on some of the signs and effects.

FOLKLORE, SAYINGS, AND THEIR MEANINGS

Red sky is a measure of how solar radiation interacts with gasses and particulates in the atmosphere.

The Red color of the sky occurs when solar radiation strikes particles and gasses and produces a certain wavelength of light. Most of the atmosphere is nitrogen and oxygen (which scatter to make the sky blue, a phenomenon called “Rayleigh scattering“), but at certain times of the day under certain air masses, the sun can hit just right and produce red and orange scattered light. Typically, pollutants, aerosols, and lithometers (particles) are much larger, and therefore scatter longer wavelengths than naturally occurring gasses.

When you see it to your east, (in the Northern Hemisphere) that means that light is scattering off trapped, mid-level gasses and the high pressure is moving off, and will be replaced with lower pressure, less stable air mass. The opposite, red sky at night, means that the stable column of air is moving towards you, and decent weather should result. They say that the coldest weather is generally 48 hours behind the passage of a cold front. That’s because high pressure and stable air indicates that the cold air is below the warm air. Because of this, we can expect ambient cold, generally accompanied by some sunshine.

NOTE: Red sky can also be a sign that there are fires to your west (winds blow from the west) which can give you some lead time if there’s fires coming your way.

…Dew on the grass, high pressure will last…

Another proverb with some backing in science, the observation of water particles on the ground indicates that subsidence (the settling of cold air) has pressed moisture to the ground. This is a strong indicator of high pressure and generally indicates that you’re solidly under a stable air mass.

If there’s moisture nearby (coastal climate, near a lake, recent rain, etc), this can be visible as fog or mist. Essentially, the high pressure traps the moisture, and light winds mix it up.

Another way we can see this effect is when smoke fails to rise. When under the influence of high pressure, smoke is ‘pressed’ towards the surface, whereas if your smoke rises quickly, the pressure is trending towards low.

So often times, when we come outside and there is dew on the grass, we can count on a day of stable, decent weather. High pressure can also be a boon for those caught in survival situations; you can collect the water generated by this phenomenon, such as the “solar still”, which can supplement your water intake.

Bottom line: Dew on the grass is a surefire sign you’re under high pressure, and weather should be stable. If there’s a lot of moisture, you might see some morning fog, but expect the weather won’t turn severe within the next day or so.

…If you can’t see your shadow, rain is coming…

Basic concept: As light passes through various types of clouds, it can have different effects. Low clouds generally allow light to penetrate through to the surface, while very high clouds tend to be thin.

In the “mid” levels of the troposphere, where the temperature is cold enough to turn water vapor into ice crystals, stable banks of clouds are thick, and very reflective. Because of this, light won’t easily penetrate them, and you may not be able to see a shadow. These types of clouds, called Altostratus (Alto: mid-level, Stratus: Stratiform, or stable) often occur in warm fronts in which the environment is still largely stable. This happens predominately as a cold front approaches, so not being able to see a shadow can mean a front is approaching.

Especially in the U.S. midwest, this can signify that you’re going to have a significant weather change, and more likely than not, some rain.

This one isn’t without some hang-ups, however, and altostratus can occur without a weather change. For this reason, it’s one of the less reliable indicators. Used in conjunction with other evidence of an approaching front, however, it can be useful!

Bottom Line: Altostratus can indicate a front, but it can also just be clouds. Take this one with a grain of salt, and watch for our other, more reliable indicators.

A good indicator, but not an absolute.

The very high, wisps of clouds known as cirrus, or commonly “horsetails,” are really ice crystals that are in the upper levels of the troposphere. As cold fronts push water vapor aloft, the vapor freezes and comes under the influence of the fast-moving upper level winds. These winds can launch the ice crystals up, and they occasionally override higher pressure ahead of a front. Because of this, horsetails can be a sign that low pressure is coming. However, they could also be an expression of surface topography. Mountains and hills can lift moisture if surface winds are strong enough, so this one requires some knowledge of terrain.

This is a reasonably reliable ‘sign’, but it’s important to note that note a couple pitfalls of using this method:

1. Not all fronts are strong enough to produce bad weather, and;

For these reasons, use this as a first ‘tip’ that something could potentially develop over the next couple days. If you apply this principle with other signs (such as a strong southerly wind and rising temperature), you’re going to be able to accurately determine what’s coming along… and with a decent lead time.

Bottom line: If you see cirrus, use it as an indicator that something might becoming your way. Watch for those southerly winds, an increase in humidity, and the emergence of altostratus. It could just be some trapped moisture, but it’s a useful ‘first look’ when used in conjunction with our other indicators.

This is just a bit of general wisdom that doesn’t get too specific, but it serves as a useful guide. The sayings in this article are not hard and fast rules, but rather a useful guide. Use them in the field and you may find yourself either verifying the conditions you planned for, or you may find yourself ahead of the conditions. Either way, we will continue this series with reading the sky and earth in future editions.