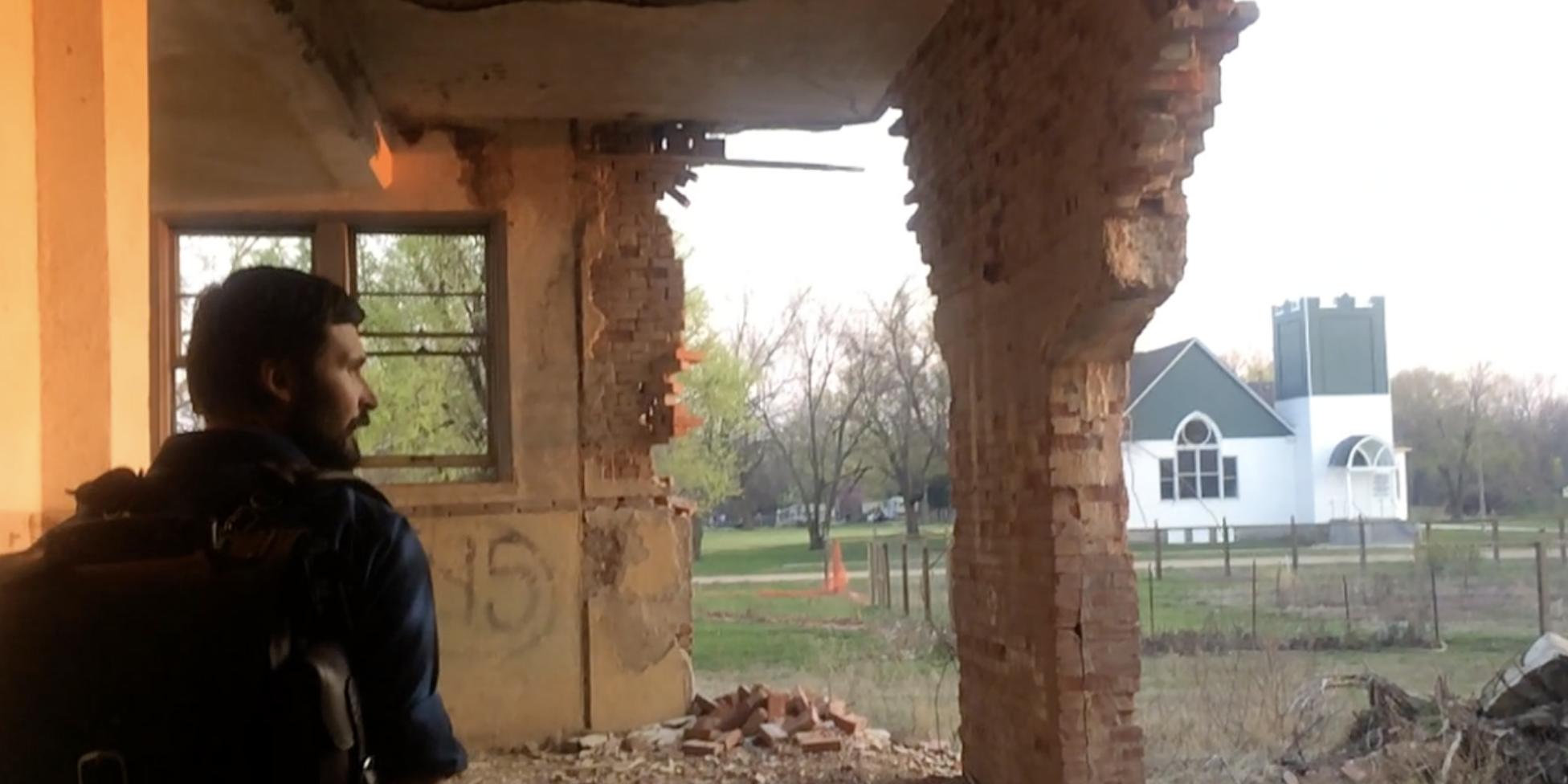 In the interest of both history and adventure, we often travel to place that have been left behind. This is one of their stories.

I remember driving slowly. You know the way; leaned forward, too close to the steering wheel, looking intently for a trace of the destination.

Like many towns left to time’s relentless subtractions, Neosho Falls is off the beaten path. Every now and again, a picture would eek it’s way up from some traveller who had driven through the area and found the remnants of the abandon town.

Like many others, it had found some low-key fame among adventurers and amatuer historians, and like most locations in those circles, very few people will draw you a map and help you find it.

If you don’t have the initiative to find it on your own, well, you probably should just enjoy pictures on the internet and not disturb the place.

A simple green sign “NEOSHO FALLS 7” indicated the turn, and I hit my blinker and turned. The road thus far had been mostly improved county roads, well enough traveled that the trip was an enjoyable and scenic trip through the bucolic rolling hills of Northeastern Kansas.

Kansas is a funny place. Like most of the midwest, you’ll find that people categorically recoil in faux disgust when you mention flyover country. They’ll wince as if the place has wronged them. Stop at any diner or gas station and you’ll find the usual assortment of folks just going about their lives. Farmers, drivers, waitresses, dogs off leash sniffing every tire they come across. The type of people who say hello or have a good day and mean it.

It’s less regulated, less complex, but it’s far from uncivilized. The same people who will sneer at the thought of the midwest and Gulf states will light up with their dreams of New York, Miami, or LA and the glimmer of unending buyers in the market to sell your soul. Those who’ve experienced both can give a dismissive nod, knowing that the true savage doesn’t live in the wilds.

As anyone familiar with Kansas can tell you, calling anything there a “falls” is going to require a limber imagination.

While Kansas isn’t nearly as unflatteringly flat as people claim, it’s composed mostly of rolling hills and the waterways that twist and wind through the state are gradual, for the most part.

Gravel crackled under my tires as I rolled along the dirt road, waving to a farmer looking on with passive curiosity. The road became more treed, and the farther I pressed, the more the canopy grew over the road; a great blanket of Elm and Maple darkened the sky like a tunnel. To either side, a tanglebloom of brush obscured the odd building, rusty farm equipment, or stock pond.

I was surprised to find myself once again on tarmac, and I slowed, pulling off to the side and stopped in a town that couldn’t quite be described as abandon.

Throwing on my pack, we started walking the main street. The space the town had occupied had been decent; in its day, it had been a bustling railroad town and the seat of Woodson county, brilliantly located at the confluence of the Atchison, Topeka, Santa Fe, and MK&T rail lines, as well as on the Neosho River.

It was as seemingly ideal location, and the population bloomed to over 1,200 people, a small metropolis in its heyday. Neosho Falls was soon the site of a hydroelectric power plant, bank, railway depot, several churches, hotel and gristmill.

It was the late 1920’s, though, and nothing lasts forever.

If you draw a straight line, most adventures have a point of origin. Some initial spark that catches on the a dry imagination and starts smoldering. For me, the Neosho Falls school was what grabbed my attention.

In the pictures I’d seen, it was a massive concrete structure, left to the elements and nature and overgrown with vines and steel beams with nothing to support.

From the exterior, the grey building was a forbidding relic of some unknown migration, left out of some unknown desperation. It had my interest and before long, I’d hear the story of what tragic circumstances unfolded and left those ruined buildings in their wake. I stood outside, looking up at the walls, the graffiti, the juts of broken steel, and rebar visible just beyond the cavernous doors and barred windows. The building looked like it was being pulled into the ground, and the front revealed very little about the what lay inside the cement walls.

After a glance around, we decided to head in.

The Gym was where we entered, overhead great arcs of steel trussed the space where the roof had been. The walls were lined with graffiti and overgrown with climbing vines.

The school itself was concealed behind the gym and exterior, and it’s size became apparent as we passed through the gym and into the classrooms.

Compared to a modern school in a city, the building was certainly not huge, but for a town that had been dying for almost 50 years, built for a town of 1,200, it was surprisingly large.

We traversed the corridors starting from the top, and working our way down. Holes the size of small cars punctured the rear of the building, where the old design had used bricks. The walls had been torn free from the 2×4 frames, exposing pipes, broken bricks, and interior wood paneling to which blackboards had been mounted so long before.

Broken porcelain littered the floors of the bathrooms, and as we walked the stairs to the boiler room, the walls blotted out the exterior light, leaving only our flashlights and silence between our footsteps.

The condition of the building drew comparisons to those left in the wake of Chernobyl; a place where all the buildings had been given up at a moments notice to whatever forces replace us when we’re gone. Time. Gravity. Entropy. The weathering of the brick and stone that makes mortal all our human efforts.

Looking out the window of the destroyed school, an American flag blew in the breeze from one of the town’s lone intact buildings; the Post Office.

As we came to the end of the hall, and an opening big enough to drive a small truck through, we saw the town’s church, well-kept and cared for along side the forgotten school.

We left the school with a deepening curiosity as to what could have happened to cause the destruction, and it wouldn’t be long before we found out.
‍

The Town, Part 2: The Oasis

The only open establishment in town. We wouldn’t even have known, if it weren’t for a couple of little dogs running around sniffing our feet and wagging their tails. We walked around and finally found it; the Oasis Cafe. I stepped inside as the ‘ting-ting’ of the bells hanging from the door alerted the owner to my presence. A couple women, maybe mid to late 40’s had been talking.

“Hi, what can I do for ya?” She asked with a look of surprise.

I gave her my spiel – I was in town to look at the place and learn about its history. She told me the story, but a complete history can be found here, thanks to another author. The following is an amalgam of the two to give a complete history for anyone interested:

Neosho Falls had been a prosperous little town, but the installation of large scale power plants had made it’s small hydroelectric station all but obsolete. Then, in 1926, the town was hit with a major flood, destroying several buildings on the eve of the great depression. Not long after, oil money brought interests back to the area, in the late thirties, but the second World War, had barely ended when a second major flood in 1951 all but removed all doubt that Neosho Falls was dying. The Schools closed in the 60’s… the high school first, and 8 years behind it, in 1969, the Elementary ushered out it’s last class, leaving the building to decompose at leisure.

I thanked the owner for her time, and bought the only things available; a snickers bar and a bottled water, before taking my leave. There were a couple more things to see here before the trip was done.

It should be said that some years later, I ventured back to Neosho Falls to again thank and patronize the Oasis for being so hospitable. Sadly, when I arrived, it had closed for good.

The Neosho River takes its name from the Osage word meaning “clear water”, and with headwaters in North-central Kansas, it flows south into the Verdigris and Arkansas rivers, ultimately, a part of the Mississippi watershed.

By the time I got to the Water Station, I wasn’t sure what I was looking at, but the water didn’t seem to care. The building itself was dilapidated as you’d expect, and the only entrance was a series of rebar rungs that could be accessed from below. I sat by watching the water pour over the spillway and listen to that indescribable sound of flowing water with a sense of ease. These are the little details of exploring that I enjoy the most.

In ordinary life, we don’t get to climb much, and most of us don’t get to sit by a river and just listen to it do what water does. Even less often do we get to poke around the long abandoned machinations of our forebears and wonder what kind of toil and effort they put into the things we abandon.

The power plant was indistinguishable inside, and to be fully honest, I don’t know if there was anything left that was capable of turning an electric dynamo… just a confusing sprawl of mess under a checkerboard roof with a malformed swastika painted on a water holding tank.

The floor was rotted to the point of being clearly dangerous, but I’d seen what I came to see, and was happy.

We sat by the water for a while longer before hiking and climbing our way out, and working our way back to the roads to leave Neosho Falls more or less the way we found it.