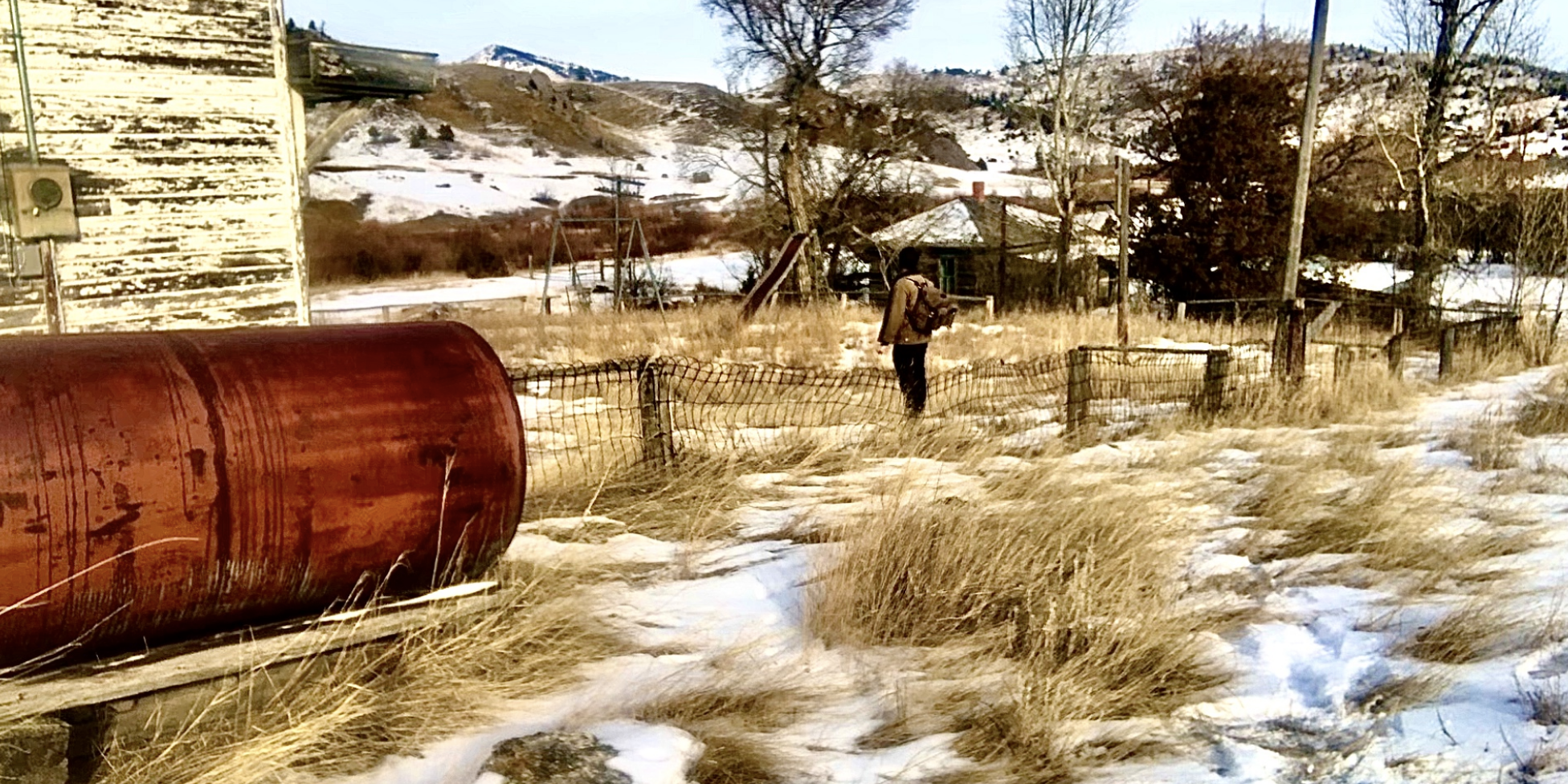 Contrary to the “Hills have Eyes” myths perpetrated by Hollywood’s effete, rural America is a lost, lonely place that deserves understanding, not ridicule.

I remember when I was young, small town life was still the norm… most people didn’t live in cities, as foreign as that now seems.

People grew their own food, they worked with their hands, and they understood much of life’s lost idiosyncrasies… Their world was the real world, natural, full of wonder and terror, and unforgiving of those who didn’t push back against the relentless march of entropy.

The sun has set on rural America, and now, the plains and mountains lie dotted with the remnants of settlements that sprung up around industry, the railroads, and the minerals that set the groundwork for transcontinental expansion and the modern age.

The bleary-eyed fear culture that has sprung from American cinema paints a picture of these communities as dangerous breeding grounds for degenerates awash in bibles and guns, but while it’s true that rural communities hold to faith and self-reliance, in many ways, they’re the last vestige of sanity in a world gone insane.

To them, the cities are the terrifying unknown, where the common life known by their ancestors for uncountable generations has utterly shorn from its mooring. That’s something worth considering.

This is the first entry into this series, but it’s far from the first story of its type.

For most of the last 10 years, I’ve been stopping in places that have largely been forgotten. For, there, in that wreckage, is the unceremoniously uninterred body of our ancestors, left behind in the restlessness of progress. Abandonment, it seems, is as much an intellectual idea as a physical act.

There’s nothing special about Maudlow, Montana. As far as ghost towns go, it was one like many others. The scenery though… God the scenery. All around me, granite ledges jutted and gave way to rolling fields of snow-covered grass. The road twisted skyward, terminated in vistas of the Tobacco root and Spanish Peaks behind me, and Sixmile mountain to my north. Evergreen stands lined the road in spots, dropping into sinuous river basins where Dry Creek slithered its way to the Gallatin River. The road seemed to go on forever… slowly, the tarmac gave way to washboard, and the washboard to snow and ice, until at last, after an hour or so, I caught sight of some buildings.

I’d found Maudlow, such as it was.

“Can you tell me anything about the town?” I asked.
He corrected his gaze from the road and eyed me with suspicion. “…maybe.”

I stopped and wandered on foot for a while. One of the most indescribable things about these abandoned places is what you hear. We think of remote places as silent, but they’re anything but… the breeze cut through the buildings and grass, stirring the dried brown stalks and rustling tattered curtains in the tall, pearl schoolhouse. I got closer, and hopped a small fence. The buildings were clearly posted “No Trespassing”, but I didn’t see any such formality on the grounds itself. Inside, a staircase led to an upstairs with broken windows and faded blue interior. Curtains flickered like flags of some lost garrison, given up for lack of stake.

Books and notepads littered the floor, undatable and congruent, but lost all the same. The courtyard had an old steel slide and basketball hoops, faded, rusted, and splitting under entropy’s cold hand, but above the blue sky and granite hills kept a timeless watch that’ll remain long after the last human is gone from this world.

I walked on, until a pickup truck approached.

A pickup pulled up along side of me as I put the Cruiser in park. I could see his window roll down, but I was out and on my feet as he came to a stop. As often as you see country people portrayed in film as backwards yokels with itchy trigger fingers, the vast majority are curious, lonely, under-appreciated, and above all else, live by a code that’s long since died in the age of McFriendship and spontaneous communication. A code that requires that a personality be audited for veracity. A code that requires tending and commonality, or it will harden mistrust like cement around your feet where you stand.

“I’m just taking some photographs sir, I won’t go in the buildings.”

“That first part don’t concern me.” he replied. Now, as far as cliches go, it’s hard to find one more ubiquitous than Sam Elliot… the stern faced cattleman with the long, horseshoe mustache. This man was the spitting image of Sam Elliot, minus the voice. He wore a dark, sun faded Stetson, western shirt and jacket, and rested his hands on a pair of dirty work gloves.

“I take pictures of abandon and forgotten places so that the history isn’t lost. Can you tell me anything about the town?” I asked.

He corrected his gaze from the road and eyed me with suspicion. “…maybe.”

I nodded. “Have you lived here a while?”

I nodded, but I didn’t quite understand. I remember thinking ‘Did he say 7 years?’ He was weathered, with gray hair gnarled, leather hands, but didn’t look to be 70. “You’ve been here 70 years?” I asked.

The signalman moved out in the 50’s. I can’t remember what year.

My early years I spent around country people. I never felt like they were stupid, small-minded, or backwards… they lived in the moment they found themselves in. Most didn’t have the time or energy to consider much more than the life laid at their feet. I’ve always been comfortable talking to people in rural areas – some basic manners go a long way. So does honesty. I’ve found in my years that unlike lying, when honesty goes bad you can always fall back on the truth, so I try and be upfront with folks.

“Would you mind telling me what happened? How did it come that people left?”

The man sat up and reminisced visibly. He told me that it had been a railway town. The railroad stopped, and after that, it was all but done. He pointed over my shoulder to a rust-brown building of ancient evergreen lumber, fitted together stained with pitch. “That was the signalman’s house right there. I lived in the hotel.” he pointed behind him towards a two story building. “The signalman moved out in the 50’s. I can’t remember what year. After that, it wasn’t long before there was no town.”

We talked casually about how it’s common for towns to lose the support of industry and fold up, and how it affects the lives of those who settled in the area. He told me he was one of just three families left in the area. By mistake, I’d pulled nearly into the driveway of one of them, and saw an expanse of land set to the backdrop of the rolling hills.

“Are they a cow-calf operation?” I asked.

He rolled his head back, as if pained. “Useta be. The kids got ahold of it. They haven’t got any interest in that now.” He told me that it seemed that was the way of it, now.

It was at this moment, that I’d realized the dam was about to burst.

“But I’ll tell ya… when the wind and snow were up, on that hill? You just couldn’t make it to town.”

He began talking at ease, and I let him, peppering the conversation only with an infrequent ‘yessir’, or other agreement. It wasn’t placation, either. He became more passionate and animated, and I found myself hard pressed to disagree with him. Our conversation began with the little things that had changed with the times. He told me of the days where going to town 30 miles away was a rarity. He told me that the snows used to be worse, and back then the wind and snow would make the road so dangerous you just couldn’t risk traveling. “Nowadays, hell, and I’m guilty of this. Nowadays sometimes I go to town and back twice in one day.”

I listened as he talked about town, and how it had changed, stopping only to offer some of perspective having grown up in an area that flashed over into a major population center. The changes, he understood, were just happening too damn fast.

“These kids just don’t understand where food comes from.”

“They don’t care what their parents worked for, they only see this” he rubbed his fingers together. These kinds just don’t understand where food comes from!” He spoke more quickly now. “When I was in school” he said, “There was no mystery about where food came from. You planted the seeds, you tended the crops. The grain went to the mill. Now, they are just waiting for their parents to die so they can sell the property.” He told me eventually they’d find themselves in need of food once again, and he balled his fist as he spoke. He hit the seat, the steering wheel, then the dash for emphasis as he did.

He looked at once exhausted. Tired beyond words, and at that moment I believed he was 71. It showed on his face.

“I’ll tell you. This is selfish. It’s a selfish thing to say, but I won’t live to see it…” he looked away from me. Shame? Guilt?

He and I talked more and honestly. There’s something to be said for unpretentious conversation that is just truth as a man sees it. We talked politics, the insanity going around, and he recalled memories from life. They’re his stories and he’ll tell them to you or die with them, but they’re not mine to tell.

I told him thank you, and gave him my name. He replied in kind “Lyle. Good to meetcha.”

This story, like many others, isn’t one that will change your life, or make you think for days on end. It’s just another tale of time turning, and the people who are broken by the wheel of time when it passes over them. Why Maudlow?

Why start this series with Lyle’s story?

Because there’s something vacant in modern society. Some deeper understanding that exists out there in the places many people don’t know to forget that says no matter the world you live in today, it’s finite. Nothing is for granted, and nothing lasts forever. There’s a humbling reality that we do our best to ignore, but that is built right into the fabric of men like Lyle.

If we let it, it allows us to see what’s important doesn’t depend on the standard of living we provide for ourselves. There’s more to life than comfort, and in comfort, we find very little wisdom. That will make you think.