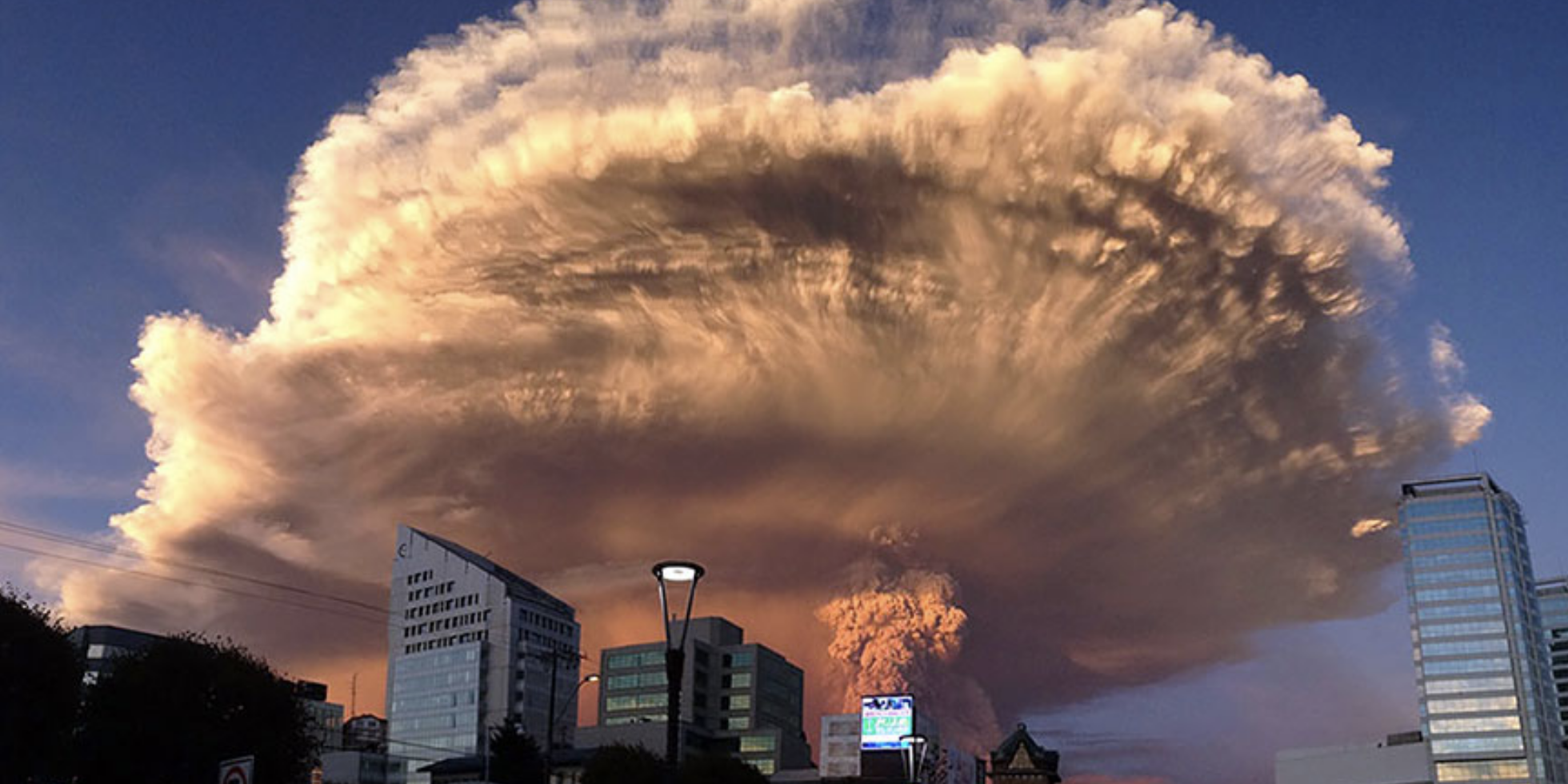 Ever worried about the Yellowstone Caldera blowing it’s top? We’ve got some solid information on why you should give eruptions serious thought.

Of all the alarming natural disasters, perhaps none is so ominous as the super-eruption.

Injecting cubic tons of gas and tephra (ash and pumice ejected during an eruption) into the atmosphere halting travel with plumes of toxic gasses that could block out the sun. Such nightmare scenarios aren’t all fiction, either.

The Toba eruption some 74,000 years ago was thought to have left the earth with as few as 1500 breeding pairs of humans. Imagine for a moment the conditions that would cause a genetic bottleneck of this magnitude:

Ask a Volcanologist, and the answer is clear: It’s not a matter of “if” these eruptions occur, it’s a matter of when…

Before we go on to discuss the frequency, it’s important to know the types of volcanic eruptions, and their severity. At their most basic, eruptions are categorized by:

There’s typically an inverse relationship between frequency and plume – the more often the volcano erupts, the less tephra is ejected per eruption. The following graphic details the classification, but more information can be found here, thanks to Oregon State University, but the graphic doesn’t work well with our software, so here’s the USGS’s take on it:

So from what we can tell, the most damaging eruptions occur on much longer timelines – 50,000 years or more. That doesn’t mean we should clear the slate and stop thinking about volcanoes, however. Plinian and Ultra-Plinian eruptions cause major concerns, and could drastically alter the climate for periods of years or more.

Eruptions in these classes occur between 12-100 years, so it’s likely we’ll see something like this several times throughout our lifetimes, though they’ll likely be localized emergencies of limited scope.

What we need to make note of is that these are broadly Type II emergencies; moderate duration events that will resolve on a shorter timeline. The Type III disaster that fundamentally changes life indefinitely can’t be ruled out, but they’re far less common.

So let’s return to the question of “when”. If you follow the news, every little rumble or change that goes on in Yellowstone is a sign of the impending super-eruption. The truth is, it’s an active Caldera. Things happen. Things change. That’s the way it is. While we shouldn’t neglect that things *are* changing, we should measure our concern based on the speed and intensity of those changes.

“There’s no Reason to believe we’ll see one [Yellowstone Caldera Eruption] in our lifetime… it’s more of an academic interest.”

If you have any serious curiosity about the subject of the Yellowstone Supervolcano, you should watch the presentation by Dr. Mastin, but suffice to say, a Yellowstone Super-eruption is a very high impact, low probability event… even considering the cries of “overdue!”

Overdue in this case could mean an eruption is likely within 20,000 years, so while it’s prudent to take the precautions we’d take with other emergencies (a structured, layered plan for sustainment, a reserve of provisions, and a way to move if necessary), the long term impacts of a disaster like a super-eruption would be largely left to chance. If you’re on the North American Continent when the Yellowstone Caldera goes, your life will likely never be the same.

With that said, just looking at the history of the Yellowstone Caldera, it’s most powerful eruption, the Lava Creek Tuff  estimates 400-1000 “Dense Rock Equivalent“… By way of comparison, the Toba Eruption was between 2000-3000 DRE.

“Mount Tambora ejected so much ash and aerosols into the atmosphere that the sky darkened and the Sun was blocked from view. The large particles spewed by the volcano fell to the ground nearby, covering towns with enough ash to collapse homes. There are reports that several feet of ash was floating on the ocean surface in the region. Ships had to plow through it to get from place to place.”

As described above, anything with a VEI above a 6 could cause some major impacts to global stability. Unlike other natural disasters such as wildfires, earthquakes, and floods, the Super-eruption has the ability to impact entire regions, if not hemispheres. That makes them uniquely dangerous, and is something worth considering. However, the infrequency of such intense eruptions means there’s not a whole lot you can do about them.

In the case of an eruption, the danger to humans comes in some distinct phases:

If you’re caught in the plume from an eruption, expect that tephra (fragments of rock and pumice ejected during an eruption) will become a threat. Not only does it impact the respiratory systems of living creatures, but it’s also very damaging to engines and machinery; this commonly causes problems with flights, or combustion engines.

Wear a mask: If you don’t have one available, a dampened cloth over the mouth and nose can be a stop-gap method.

The USGS prepared a Ash Mitigation for vehicles. You should read it, but here are some main takeaways:

The article suggests using water to clean off the ash, but water will attract particles, and we would suggest that this might not be best practice. Compressed air seems like a safer bet.

If you live in a river valley near an active volcano, have a plan to get out quickly if it starts rumbling. Similar to a fire or flood evacuation plan, have a list, and staged goods that can quickly be loaded into your vehicle. Have a few planned routes, a method of communication that isn’t reliant on cell towers, and some supplies staged. If you have friends who live in a place like that, offer them the same support if you’re able.
‍

While definitely a realistic threat, we shouldn’t confine the volcanic emergency as simply “super-eruption”or “not important”. There are varying degrees ranging from ‘absolute Apocalypse’ to ‘interesting side-note’. What we can say is that our general template for emergency management still applies:

At it’s core, this is an emergency that could flex between the types, so it requires a bit more thought. However, given the rarity of the Super-eruption, we want to emphasize that terrorists aren’t going to trigger an eruption, and the Russians probably can’t, either.

If you want to know more, you can always stop by the USGS’s page for Yellowstone, where they provide up to date information on the condition of the Park and Caldera.

Be vigilant and plan ahead,

Corporate Author. “Volcanic Gasses can be harmful to Health, Vegetation, and Infrastructure”. USGS. May 2017. Recovered from Web. https://volcanoes.usgs.gov/vhp/gas.html