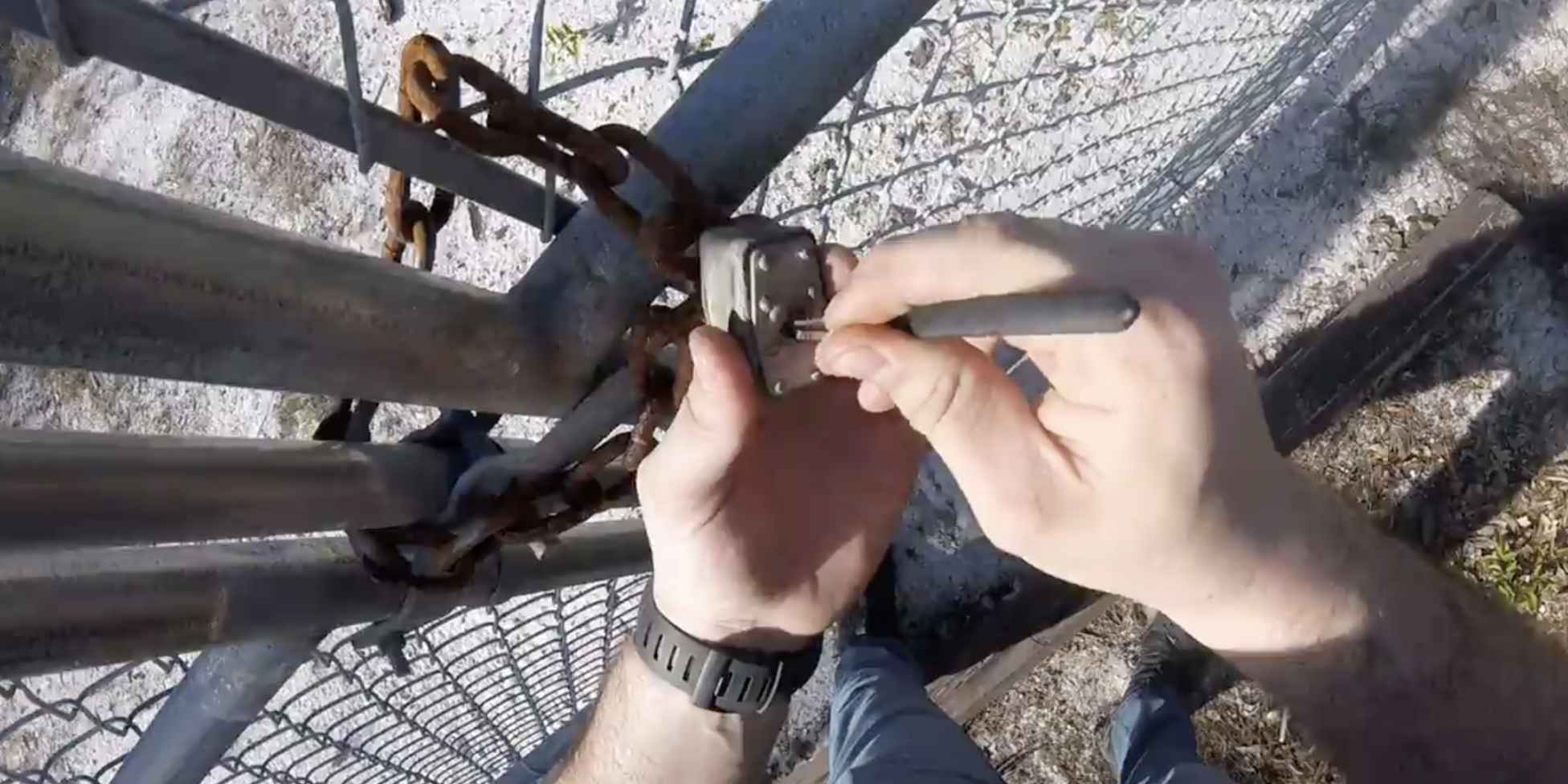 When discretion matters, knowing how to defeat security without leaving a trail of destruction is invaluable. Join us as we discuss defeating physical security.

My father told me that ages ago and it’s true. The idea behind most modern security is to slow down potential thieves, keep them scouting for easier targets, or disallow them access to your valuables.

In Spheres of Violence, we talk about how weapons-based skills don’t cross cleanly between different professions. With lockpicking, we have a universally important, useful, and time-saving tool that, when employed by people who have some ethics, can be helpful whether you’re exploring or locked out of your hotel room. So what do we mean by non-destructive bypass?

We mean developing skills necessary to get past padlocks, door locks and deadbolts, and vehicle locks without destroying the locking mechanism or some other element of security. We focus on these types of locks because typically, these are the common points people lock themselves out of and have to call a locksmith. If you’re a thief (or you’re in a serious emergency), it’s far easier to just break stuff. Non-destructive entry in general means you care enough to not break the lock.

The Lobby: Ethics and Practicality

Our entire culture at ISG is based around things that are inherently dangerous; from rappelling to shooting guns, we find that the difficult skills are the ones most worth pursuing. With them comes responsibility. So while we agree with many of our peers that certain skills should be kept ‘private’, we want to skim the surface of security bypass. This means we’re putting our trust in you that you’ll follow the applicable laws… and more importantly, that you’ll use these skills ethically.

So here’s what we’d like to ask in return:

Please don’t steal. Don’t pick a lock without permission. Don’t use these skills to trespass. Know your laws in your area regarding possession of lock picks.

With the ethics disclaimer out of the way, there’s still a feeling of revulsion in a lot of people when we discuss bypassing security. Often, people reflexively ask “why would you need this?” or worse “why would you teach this?”

The answer is manifold:

There’s nothing inherently wrong with being able to defeat security. Like many of our other skills, when you can pick locks, you’ll find that you’re a lot less reliant on others and that your friends and co-workers appreciate it when you can help them out.

Your security is only as good as your weakest point.

Training for security bypass can start pretty simply: Got an extra lock with no key? Start a box. Changing out locks on your house? Keep the old ones and build a lock tower.

As for what picks to start with, there are tons of options and as with anything, what you get will start with asking “what do you want to do?” With that said, here are some of the kits and tools that the ISG team has used to great effect while out and about:

Bogotá Entry Toolset: A simple, durable, and effective toolset, the Bogotá provides a lightweight option with a limited magnetic signature. The Picks themselves each serve as a tension wrench, and feature a probe and rake that are good enough for most types of locks. The Bogotá tools have been a constant companion for 9 years now, having traveled most of the U.S. and overseas with the author. While they’ll handle most jobs, for high security locks, those that require top-of-keyway (TOK) picking, or those with very narrow keyways, they just won’t do.

Sparrow’s Creeper Toolset: The Creeper picks up where the Bogotá’s leave off. They offer more tools in more sizes to address the less common high security locks. ISG Team members view the Creeper Toolset as a ‘standard’ piece of EDC for those with some skill and interest in lock picking.

ISG MMD Wallet/Rare Element Toolset: These sets are part of a limited edition partnership between ISG, Manly Man Designs and Rare Element to create a truly ‘everyday’ wallet that discreetly holds a high-quality, minimalist pickset with the essential tools; a Crows Foot triple peak rake and Hybrid probe, along with several options for torsion tools to give a variety of options for torsion, single pin picking, and raking.

Plug Spinner: The plug spinner is a tool of convenience. On some residential locks, you can pick the incorrect way leading to cylinder release, but no actuation of the lock itself. That means you picked it, but the lock isn’t going to budge. A plug spinner can save you the hassle of picking it again by rotating the cylinder so fast that the pins don’t have a chance to reset. While good picking technique is preferable, the plug spinner can save you some serious time. We have a video on it here, but fair warning… it’s old.

The normal first response when people learn you are able to pick locks is that you’re either a criminal or spooky. When I tell people that of all the skills I’ve cultivated over the years, lock picking comes in handy more than any other, there’s almost always a non-committal “huh” and shrug. The truth is that bypassing locks is not only useful for criminals and special operators. There’s a practical element to it that can help you save time, money, and generally be more efficient.

Let’s be up front though: for disaster management, picking locks is one of the least expedient methods possible. Unless you’re a pro, destructive bypass is usually much faster.

With that said, we often times want to get into places without leaving a trail of broken stuff… A person who can get to an intermediate level of skill with raking and single pin picking can expect they’ll be able to get in to most low security padlocks and safes, and residential doors.

As this this series progresses, we’ll discuss the role of security bypass in emergencies, but for now, it’s as simple as this: People get accidentally locked out of things all the time.

It used to happen to us, too.

A word of caution: if you’re in an emergency situation, non-destructive methods take a long time. Each lock is different and it takes time to learn them. Cultivating some picking skills is great, but don’t expect that you’ll be able to step to any lock you encounter in the field and pick it. The lock’s condition, age, security rating, how its mounted, the light conditions… all these things conspire to keep you out.

There are a variety of different picks that can be used to open locks, but here’s a very sensible set that will work for the majority of the locks you’ll encounter:

The basic pin tumbler lock is something that should be understood in order to be defeated. High level pickers talk about “mentally mapping” the lock. It’s really easy to over look the importance of this because:

When you start to encounter difficult locks in which single pin picking (SPP) is required, you’ll have cheated yourself if you’ve not spent any time working on understanding what’s happing inside the pin tumbler lock.

What we’re looking for when we’re mentally mapping a lock is:

Locks can be picked by a few different methods, but the most common types are:

As a part of your training in defeating locks using non-destructive methods, it can be helpful to make some basic training aids. If you’re interested in a DIY project, consider building a Lock Tower. That will only get you so far, so also look into what Sparrow’s offers; they have basic practice locks, as well as security cut-away locks for spool pins, and serrated pins.

These can be great assets in learning how to work your locks and refine your technique, from beginning to advance.

Likewise, it’s best to focus on practice when you train for non-destructive bypass; don’t watch TV and try and pick locks. You’ll find distractions cause you to tune out the subtle sounds and feels of learning a lock. Once you’ve got a lock down, sure. By when you’re first learning, truly set aside some time to mentally map and methodically pick the lock. If you find that you can’t, set it aside and return to some easier locks to stay in practice.

Picking is *extremely perishable*. If you don’t keep up on it, don’t expect you’ll be able to bypass any lock you encounter. Locks out there in life are always more difficult, and weathering, age, grit, and orientation all make field picking more challenging.

We hope you’ve found this to be a useful and informative primer that both emphasizes the practicality and highlights the tools and techniques necessary for non-destructive bypass. As we’ve discussed earlier, please use this knowledge responsibly, as we’re not responsible for misuse.

Like most of our skills at ISG, a tremendous amount of time can be spent developing your picking skills and they’re very perishable. If you plan to build the skill, plan to maintain it periodically as well.

As always, if you’ve found this interesting or useful, we hope you’ll share it with your friends. Your support keeps us alive.
Cheers,

Shout out to Patron Chris for encouraging us to write this primer. We hope it meets your expectations, and provides good information that you can use over and over again.