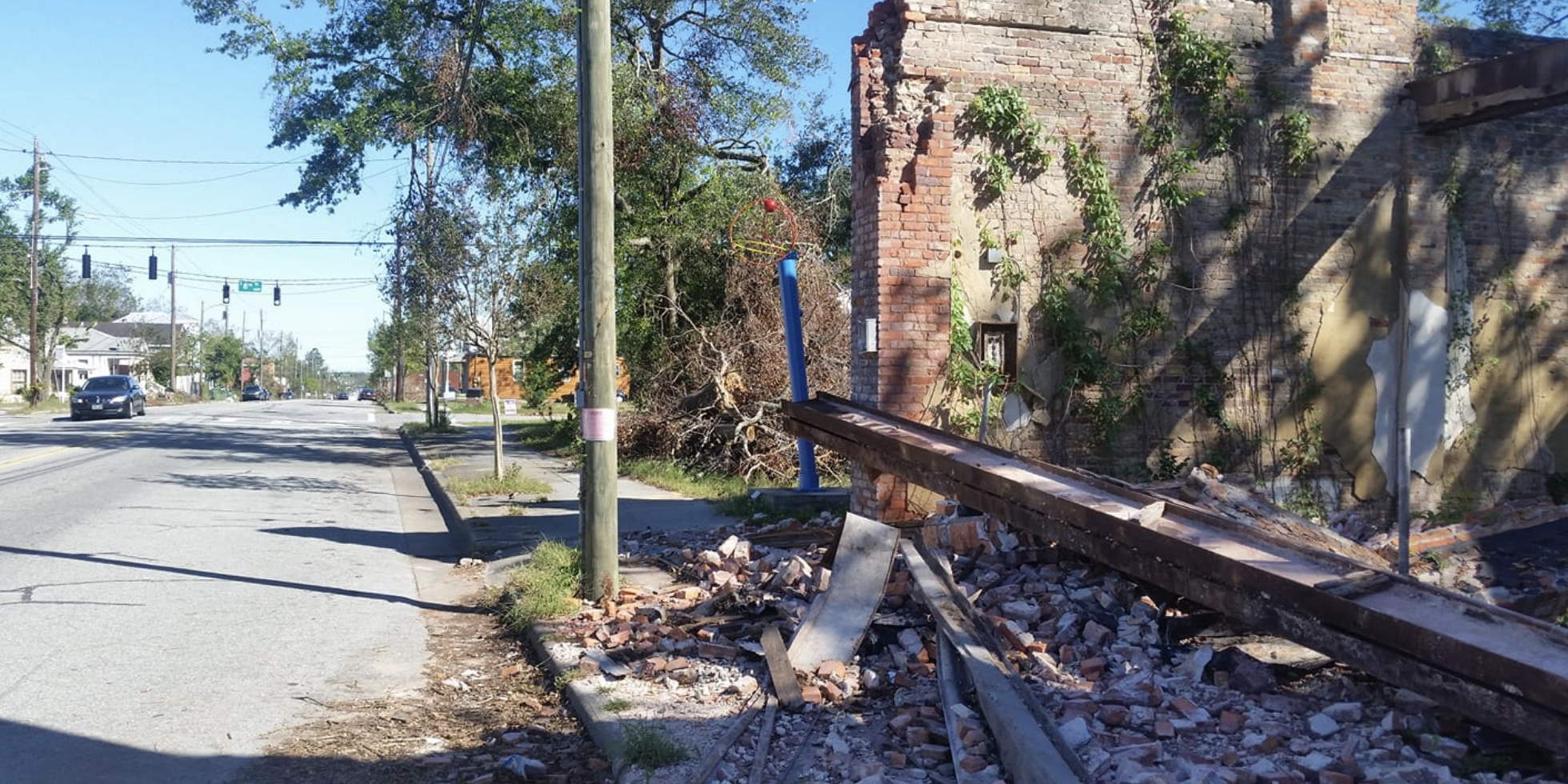 Ever wondered what happens when a community takes a hurricane on the chin? Michael Jenkins shares his story… and it’s not a survival fantasy.

On August 30, 2018, a strong tropical wave formed in the atmosphere just off the Cape Verde Island. It organized steadily whilst adopting a northwesterly track across the Atlantic. On September 1 it strengthened to a tropical storm and formally acquired the name Florence; by September 3 it was a hurricane. After briefly intensifying to a Category 4 storm, it met sheer winds and weakened again. Early in the morning on September 14, Hurricane Florence was at my doorstep, making landfall in southeastern North Carolina at Category 1 strength.

Florence was, in a sense, the perfect storm. It came ashore during a record year for rain, dumping an additional 30 inches or so of precipitation on an already waterlogged region. In a nearly unprecedented move, Florence lingered over us for four days at hurricane-strength the entire time. Hundreds of thousands of people were left without electricity, including 90% of my county. Due to intense flooding, the city of Wilmington was entirely isolated from the outside world—supplies had to be brought in by ship in a first for mainland US disaster relief. That said, we were lucky compared to some of the smaller surrounding communities, which flooded entirely.

The key lesson I took away from Hurricane Florence—and the subsequent catastrophe following Hurricane Michael in Florida—was how vitally important it is to avoid romanticizing or exoticizing disasters and their aftermath. This was not a chance to play out some ultra-macho survivalist fantasy, nor was it a joyful exercise in the superiority of the prepper lifestyle. There were no roving gangs, nor food riots; life in the wake of the storm was at best a hot, sweaty, isolated tedium. Surviving and overcoming the storm was often an exercise in lucky guesses and good timing–faced with a series of extraordinary situations normal people did the best they could. Some folks went above and beyond the call of duty to help the relief and recovery processes, while a very few folks took advantage of the situation. No one was left untouched and our communities are still in recovery.

In writing about Florence here, I’m going to do my best to walk you-the-reader through the experience and explore what worked and what didn’t whilst applying ISG’s philosophy and world view to the situation as it evolved. It’s an interesting test case: we get to explore post-disaster survival and relief in a First World city abruptly cut off from the rest of the nation. I hope you’ll learn something from what we went through. I suspect I’ll learn a great deal by writing it out.

Also: I like bullet points, so get ready for a few of those.

Should I Stay or Should I Go?

The chief question confronting all of us in the affected zone was just that: evacuate or ride it out? While I elected to stay, I’ll be quick to point out there was no “right” decision. Everyone involved had their own set of needs, resources, and constraints. There’s little room for blame or oneupsmanship. With that in mind, here are some things we learned:

Shelter from the Storm

Any narrative about Hurricane Florence comes with this caveat: It could have been worse. It could have been so much worse.The storm hit the Carolinas, and folks in this corner of the world know how to prepare for a hurricane. Most of us started getting ready well in advance—maintaining an emergency kit is an annual ritual around these parts. However, the threat matrix had shifted a bit: we were facing the real possibility of a Category 4 storm, which would have been the first to make landfall here since Hazel back in the 60s. To the credit of the entire community, people started getting ready early, and they were ready for the worst. This of course isn’t to say that mistakes weren’t made: some of us miscalculated horribly. To that end, I offer the following observations.

I’m old enough to remember when we used language like “survivalism” instead of “prepping” and when the primary threat concern was a nuclear strike by the USSR. Times have changed, and our approach to preparedness has to change with it. To that end, let me make this statement: The lone wolf survival fantasy is and will likely remain a fantasy. Most of us won’t have the ability to head for the woods when disaster strikes. Few if any of us live on a self-sufficient homestead next to a national park. We’re mostly urban and suburbanites, with some small-town and rural dwellers mixed in. Almost all of us live partially on the grid. This affects our physical preps, but it must also shape our mentality: we’re not gonna go it alone. We live in community, and we have to plan as such.

There is no one correct approach to surviving a natural disaster. As I say in the opening to this article: everyone has their own needs, resources, and constraints and thus will have to work within them. Yammering on about some ultra-macho survival fantasy whilst looking down your nose at the less-prepared serves no purpose and neither reflects nor illuminates reality. That having been said, there are wrong ways to go about hurricane preparedness and some approaches do work better than others. Learning from our experiences will hopefully help you better prepare for your own disaster experience, be it a hurricane or otherwise. Take the lessons offered here, do some additional research, and please approach the subject with some humility.

I’ll be writing future articles exploring various aspects of disaster preparedness and my Hurricane Florence experience in greater detail. Please let me know your thoughts in the comments section. Until then, stay safe out there.