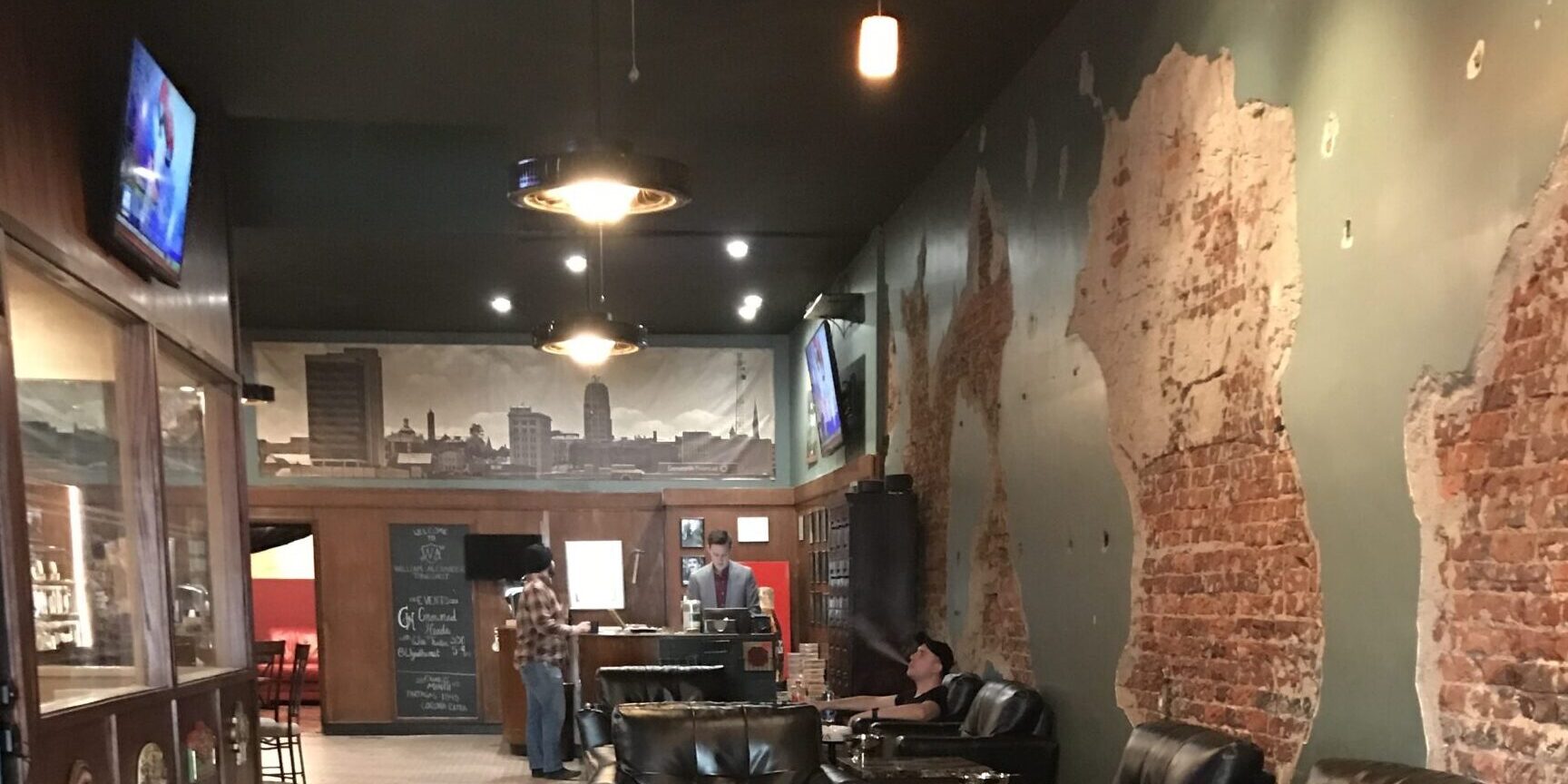 The other day I was sitting in a coffee shop listening to people talk. As much for the pulse of the local scene as for the coffee, and I casually eavesdropped on a conversation at another table:

“I hate small talk, I just want to talk about the deep topics of importance.”

It’s entirely possible that I’ve said that a time or two, but with age comes some wisdom. Interpersonal communication and resourcefulness are a big part of ISG, so there’s a lesson here. That lesson is: small talk is an indispensable component of being a human, and we’re worse off without it.

If you asked a tactical guru about transitional spaces, they’d probably regale you with tales of the fatal funnels. That’s cool, but there is a bigger picture. Transitional spaces, conceptually, don’t just mean physical barriers that force us to interact with an environment. There are social and intellectual transitional spaces, too, and when they catch us by surprise, it can be every bit as crucial that we’re able to navigate them.

We don’t often consider it, but the art of bullshitting, of flirting, of business, and probably most importantly, meeting people are ALL forms of small talk. You’re not broaching the metaphysical mysteries of the universe, here. If you think about it, it’s not all that different from “This rain has been crazy”. The results promised are higher stake and provide a shot of dopamine so we order these interactions higher.

The thing is, those are constructed situations in which you more or less have the context provided for you. A girl at the bar isn’t a whole lot different than a dude who wants to buy a watch. At least, in terms of workflow. Where this gets interesting, is where you get interesting, and with whom.

Apart from just the benefits of talking to people conversationally in your native tongue, being a good small talker really lends itself to learning other languages. That dramatically improves your interpretation of body language and non-verbal cues. If you’ve found yourself in a place where you don’t speak the language, this is like looking through a window while standing outside. You can see what people are doing but you probably feel “apart”. In this way, we can look at the ability to speak with ease as a sort of doorway. A transitional space. You’ve got to be able to interact with that environment to move forward.

Being able to use small talk doesn’t mean being uninteresting. It means you’re able to talk to people about things of interest to establish a connection. Then, use that to engage with people in a way the encourages them to reciprocate. In the title photo, Gino was using one of this areas of expertise to talk to locals to gain information. His ability to find and discuss a topic of interest with a local was huge. . He didn’t have to get into a hyper-specific conversation about cigars to get the guy talking. A passing conversation on common ground is all it took.

It’s important to understand the role of small talk, here. We’re not trying to get someone to open up about their nuanced thoughts or opinions. Our goal is to establish a connection that can be firmed up and built upon. Think of it like clearing a spot for new construction. If you just try and heap building materials on it, it’ll never really be livable or stable. Small talk is just laying a foundation.

…And let’s be perfectly up front: if you start talking about some deep philosophical topic BEFORE someone finds you interesting, you’re probably just going to end up the person clogging up the fun. Often as not, the problem with small talk is that people don’t transition well from the cursory conversation to more personal conversation. Along with small talk, our confidence, as a society, has been crippled by shifting social norms… but the truth of the matter is we all still need human interaction.

This wouldn’t be an ISG article if we didn’t discuss a bit of the meta surrounding identity and training.

Media is hyper-optimized to entertain you. It’s not a reflection of day to day life.

It’s sort of the opposite of Superman. We see a dude who works a day job, has a family, and his IG is all weapons, training, and martialism. His strength doesn’t lie in the training. It lies in the family and his day-to-day commitment to taking care of them… but we can think of stepping onto Instagram as Clark Kent lowering his glasses in an isolated telephone booth in anticipation of becoming a superhero.

As I write this, we’re watching Malthus’s vindication. The final act is going to illustrate nicely what happens when population grows exponentially and resources grow (or decrease) arithmetically. In this analogy, the Malthusian Catastrophe is our Lex Luther; it’s the villain pulling strings and plotting against the fair people of whereverthef*ck Superman lived. If we tie this all together, we have a really simple, profound point, and that is:

In times of troubles, it’s not the superheroes who make a difference, it’s regular people doing regular things well. People who communicate effectively, do the work, and take care of their people… no phone booth required.

And the Award goes tooooooo

So, as Jake put it, would you be more impressed if Lois Lane won the Pulitzer, or Superman? Superman is amazing. We all expect amazing from him. Lois on the other hand, is our regular person doing the day in and day out. Stuff that makes the world keep turning. She can’t fly around real fast to turn back the clock. She has no super powers to enlist to her aid.

When we look at the idols of the ‘tactical’ community, some have superpowers. They have legal gray area, an unimaginable budgetary tailwind, and organizational bonds that are stronger than family, in many cases. Those are superpowers for a reason: because they aren’t common and most people won’t work to get them… but when the DD214 comes in and they get their walking papers, it’s like Superman solemnly stepping back into that phonebooth. He knows full well he’s at a disadvantage again, and this might be the last change into tights he’ll have that doesn’t require a deep breath.

Menawhile, Lois had small talk. She had to open doors by hand, couldn’t look through walls, and by herself, wasn’t worth a franchise. Any ground she made had to be through good, ole-fashioned work. When we peak under the hood, being a superhero isn’t just overrated… and let’s pull this band-aid off quickly: they don’t exist. They’re less like Superman and more like Cinderella – and when run through the doorway as the clock strikes midnight and they’re regular citizens again, they’ve got to unpack all the oversized luggage they were able to carry with that tailwind. Lois can travel light.

I usually don’t teach this class to civilians (tongue in cheek, you should know we hate gatekeeping and that the secret sauce is just work), but here’s a secret:

If you end up in a confrontation, there’s a decent chance conversation will be involved at some juncture. This too, is small talk, and if we call it tactical, maybe that’ll make it cool… but real talk: you need to be able to small talk your way towards the outcome you want when it comes to violence, too. All these red-pilled Chads listening to how to be an alpha are shooting themselves in the foot. Dialogue isn’t a formulaic art; it has to be spontaneous. Entering dialogue with someone you don’t know requires more than a tape loop. Be judgmental, and use good awareness to help guide you. Jumping into some esoteric idea of how people should be treated is putting the cart ahead of the horse.

In conflict, it’s just as important to build familiarity and read the winds. While this topic is beyond the scope of the article, it at least deserves an introduction in the conclusion.

Part of the “integrated” part of ISG is acknowledging that not all problems are heroic. Most of them are NOT between two focused, committed adversaries in which there is no other possible outcome than bang bangs.

Everyone speaks violence, just like everyone’s got an r-complex underneath their cerebellum and cerebrum, but it doesn’t mean we have to start there, with the reptilian impulse imparted on us by these mortal shells. Learning the fine line in which violence goes from “possible” to “incipient” is the kind of skill we should be studying, training for, and mastering – but like any skill, we’re better off starting with the basics, mastering them, and then progressing to the more severe and demanding skills. Small talk is your EDC. You probably aren’t going to get put on the spot for verbal hostage negotiations out of the blue, so focus on what’s contextually relevant to you: the ability to be likable and conversational.

Afterall, the super-villain in this drama is going to prey on our inability to communicate with one another. Not just by crippling our modern conveniences, but by driving social wedges between us. You won’t be able to shoot your way out of those long enough for it to make a difference.

So, go talk to people.