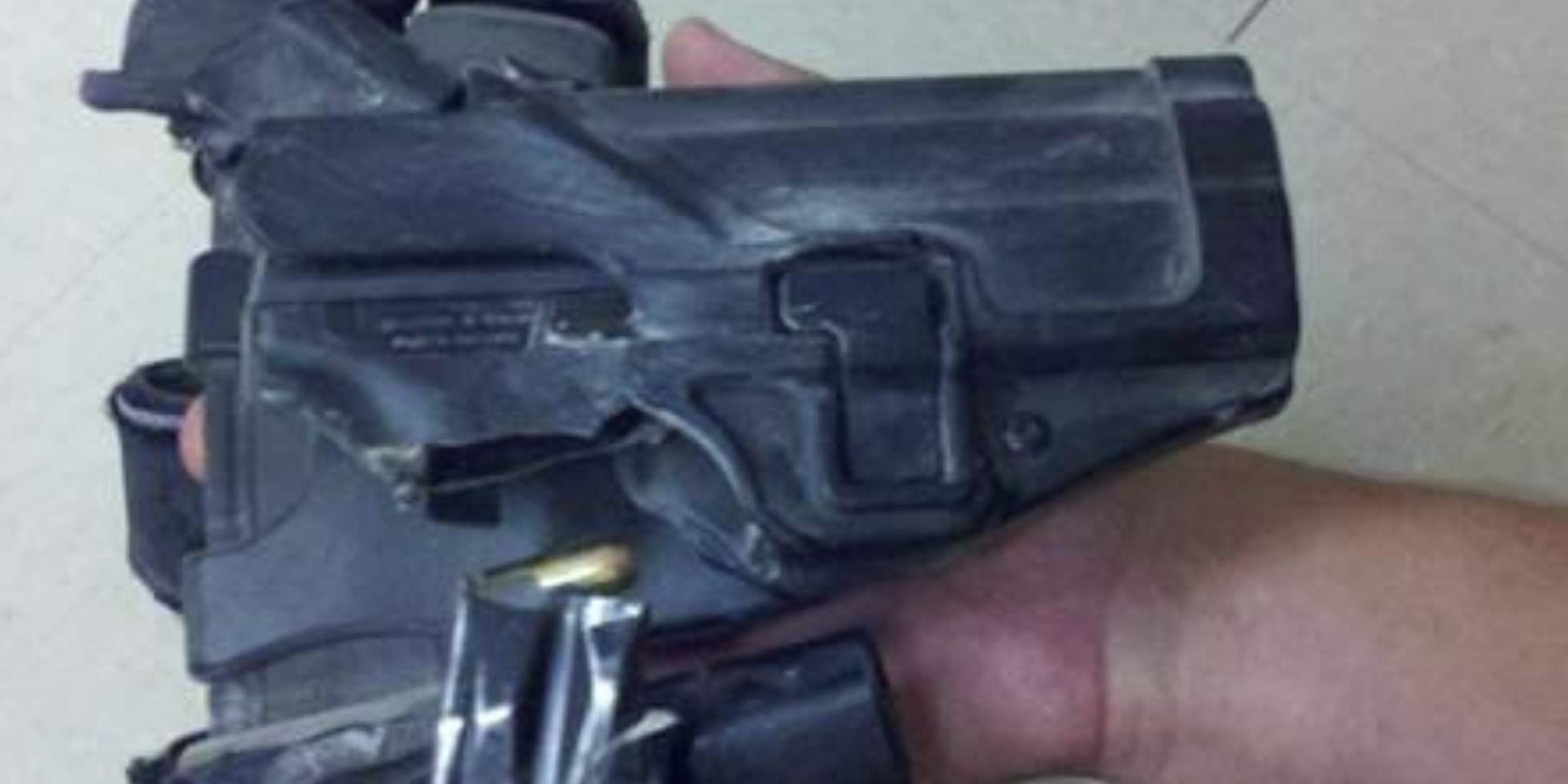 Holsters are one of the first places people default to “It works for me” logic. Here’s why that really means “I’ve never really tested it.”

Let’s start by saying: Ladies, this article isn’t about you.

Given the difficulty of dressing around a gun, it makes sense that many women are required to stray from the current and skim the murkier waters of holster types in order to find something that allows them to carry comfortably. Things like the FlashBang or Urban Carry may actually be reasonable options for you, but…

The algorithms my online habits have created never take a day off from spamming me with some stupid holster idea. They’re all the latest and greatest, they all allow you to carry a full sized pistol while in gym shorts under an Affliction t-shirt, and if you’re lucky, you’ll be able to attach it in all sorts of poor locations, such as small of the back, crossdraw, or on your arm, as is the case of the ArmsBand.

Here’s the thing: If you’re not going to the gym, wearing a suit, or swimming, you’ve got no excuse for prioritizing your gym shorts and a T-shirt over a secure, consistent carry method that affords you some retention.

When you try to give someone advice about their carry setup, it’s like telling them their baby is ugly. They’re going to shrug off the advice and say, almost to a person:

“It works for me”

Plenty of other people don’t have a choice. When I first got issued a handgun, the SERPA was still a thing because hey, it seemed like a good idea before people started shooting themselves in droves and realizing that sand, dirt, and debris bind the unlocking mechanism, priming you to die at the hands of a holster malfunction.

The SERPA is a great place to start for three reasons:

If you’d like to watch the world’s most famous SERPA misadventure, welcome Tex Grebner. Also note:

Anything truly bad and worthy of discussing meets one important criteria: You can’t train around the flaw.

As we discussed in “Everyday Carry: Everybody’s Wrong“, a realistic assessment of need, risk, skill, and experiential knowledge are requisites for being able to say “it works for me.”

If you haven’t experienced a flaw or breakage, it’s not because your product is great or you ‘got a good one’, it’s often because you haven’t found it’s breaking point. Without this experience, you get a cascade of bad practice: from ditsy chicks wading in way over their heads to the “g-wrap” and “defanging the snake“.

It works for me is a way of saying “eh, good enough.” Sometimes that’s true, but when we’re talking about defending lives, we don’t want to find the first comfortable place to stop and rest.

Holsters: The Good, The Bad, and the Ugly

A “good” holster has a few common qualities:

Of the holsters pictured right, two broke clips (the guns pointing up; a Comp-Tac 2 o’clock and a JM Custom George).

The Holster on the right with the big-ass barbecue gun is a Raven Concealment Phantom. The o-rings became brittle and broke after years of service.

It’s very difficult to recommend holsters for a few reasons, so let’s check that box first:

So, what are some things to avoid?

In a word, cheap.

If it came with your pistol, it’s bad. If you get it for less than $50, it’s probably bad.

Kydex is pretty cheap to make, so you do find some bargains out there, but guys who make good stuff pay themselves for their time. The problem with bargains is the places where corners get cut are often points of breakage. Clips instead of soft loops, for example. Pot metal belt clips on leather holsters are another ‘tell’. Since we’re talking about Type I and II emergencies when we discuss guns, we don’t want something that’s going to break if we find ourselves in a protracted emergency.

Good Leather is the opposite of kydex. It’s expensive. If you see a leather holster for $30, it’s probably not leather of a quality sufficient to house a deadly weapon in your pants, day in and day out, for as long as you choose to carry a gun.

Leather retains moisture, which can cause some surface rust, and it also ‘breaks in’. When that happens, it can fold. If it happens to fold into the trigger guard while you’re re-holstering, as Walter Sobchek says, “Smokey, you’re entering a world of pain.” Good leather is going to cost you, be bulkier, heavier, and far sexier than Kydex can ever be.

Kydex mated to leather (the hybrid holster) is another issue. Guys swear by hybrid holsters as the most comfortable things around and that’s fine… until it’s not. The problem is that they’re flimsy material attached to rigid material by way of screws. Why is that a problem? Well, if someone realizes you’re carrying and makes a grab for your hybrid holster, they simply don’t hold up.

In a hybrid holster, that gun is basically a pry-bar between a rigid material and a soft material. It doesn’t help that most of these are meant to be carried “strong side” (3-4 o’clock) where they’re braced against the iliac crest of the hip bone which provides a solid point to leverage the gun against while trying to snatch it.

Getting away from the physics and anatomy, Craig Douglas of Shivworks, arguably the foremost authority on contact range, interdisciplinary fighting, stated he has ‘never had a hybrid holster survive ECQC’. Like the SERPA, the holsters don’t survive. Unlike the SERPA, however, they don’t tend to result in self-inflicted gunshot wounds.

Last but not least are nylon or cloth type holsters, like the infamous “Uncle Mike’s”. There are times and places that you can go cheap, but this is not one of them.

Not only do these holsters trap moisture and sweat leading to unnecessary wear, their soft construction means that they have no ‘retention’. Part of fighting is getting thrown, knocked down, sent off balance from a sucker punch, or tripping over crap you didn’t notice before you got hit. If your pistol goes skittering across the floor when you do, your problems compound rapidly.

Not only that, but they don’t conceal well and the ‘universal’ mounting means that unless you’re using a 1.75″ duty belt, they’re going to wobble on your body. If it’s not consistent, it’s working against you.

We’ve talked mostly about material, but there are a couple design problems too:

Paddle holsters are a pet peeve of mine. When I was young and starting out, I had a couple and they were always a hoot. You never knew when they’d just come right off with your pistol. Hilarious at the range, not at all fun in a fight.

So the bad is, in as few words as possible is: cheap, poorly designed, or downright dangerous.

“How could it get worse?” asks you.

Well, by getting weird.

The next step in jumping the holster shark is the truly weird holsters. Strapping pistols to your bicep or wrist, for example. Some are less obvious, such as the Urban Carry, but still have weird nuance that makes them dangerously bad designs.

The Urban Carry – apart from trying to force a rigid pistol at a natural joint between the hip and leg, requires two hands to get at. In a fight, you may not have two hands available to bring a weapon to bear. Likewise, it’s all but impossible to draw while sitting normally.

Most belly bands suffer from a lack of retention and shifting, which makes them prone to working your pistol loose. Walking around might be ok, but if you have to run, jump, or fight, the pistol will flop out. Even if there is retention, the cheap metal clips or nylon buttons do little to fix the problems that are easily solved by a traditional, quality holster.

So what makes a holster design truly ugly?

If gravity can strip you of your possessions, so too can an enemy.

The ArmsBand is goofy enough that it doesn’t take a thorough debunking, but if we combine all the negative ingredients above (cheap material, poor retention, illogical placement) and add in a dash of Crossdraw and have the gun point right at your friggin’ heart, we’ve got tonight’s big loser.

What’s the common theme with guys who invent these holsters?
Well, that’s the subject of our conclusion…

In most of the videos describing why someone invented a weird holster, the reason given is “it [a normal holster] didn’t fit my needs.”

What?
What exactly are your needs and how are they different from pretty much every successful concealed carrier with any credibility?

Nonplussed stupefaction and rhetorical questions aside, here are the net take aways and what to look for:

There are people who’s needs aren’t met by modern, normie holsters and no surprise, they’re women.

Women often don’t have a decent choice of belt, wear fitted clothing, and generally have a harder time dressing around the ubiquitous “G19 in a good holster”. As instructors and students, we owe it to ourselves to address the fact that women are pouring into the CCW world (and that’s great), and they’re going to change the face of what’s ‘acceptable’. If we ignore irregular carry positions or off body carry, we do so at the expensive of a large and growing demographic that need representation, but we still need to understand best practice and how that changes across phenotypes.

If you’re a man, pick a spot that makes sense (hint, there are only two for most situations outside the gym or track: AIWB and Strong side), buy a good holster from a reputable manufacture, and train.

If you’re a gal, stay tuned stay keen to the problems with non-traditional holsters as you search for best practice. We’re working with some of the gals on our team to test and review some options that won’t work against you.

Note: The photos for this article were lifted from the internet, they’re not ours, but we don’t know who to attribute photo credit to.
We try to use our own material whenever possible.