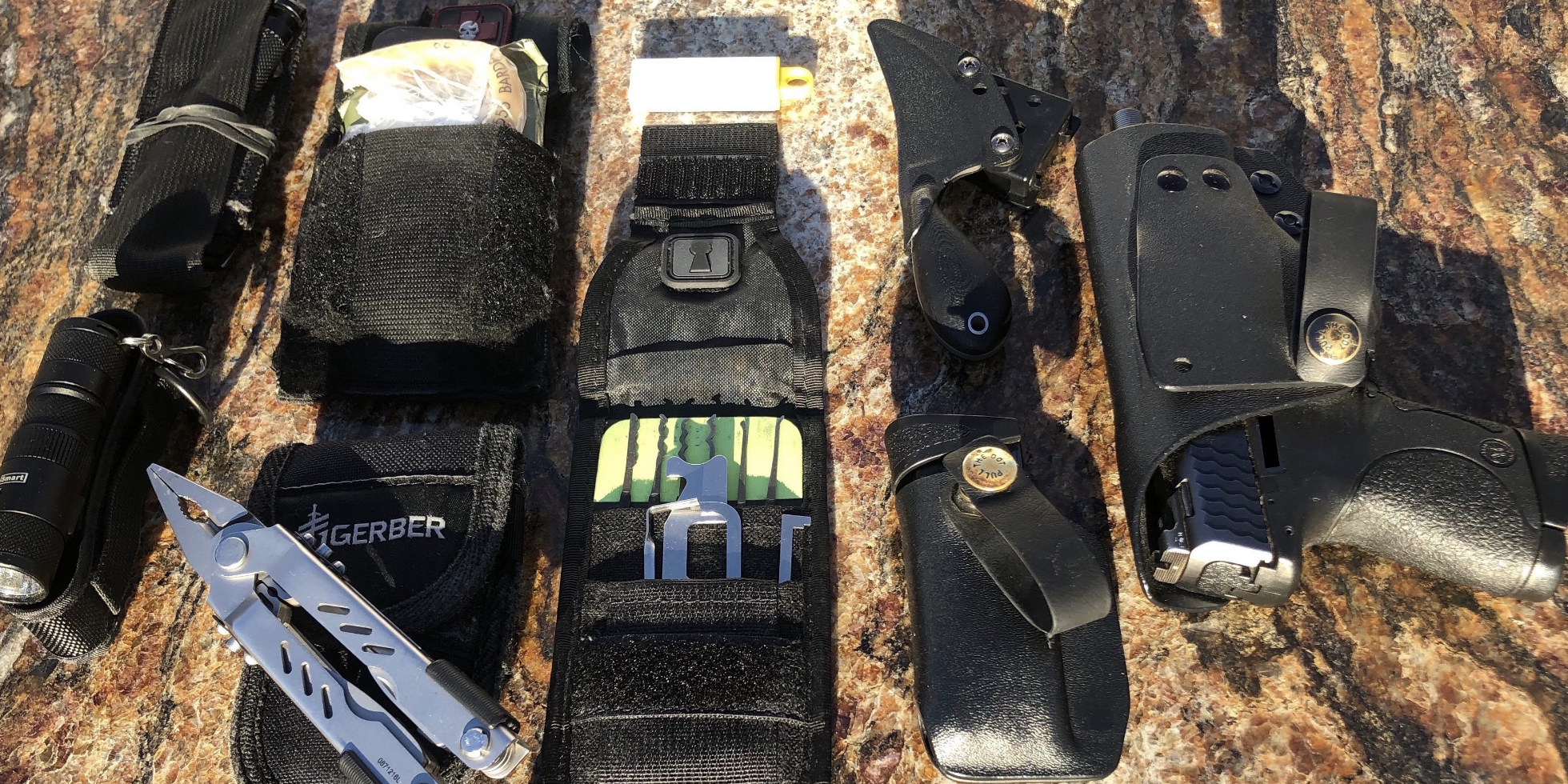 In this article, we define what EDC is really about: matching your ability and equipment in a way that makes you always an asset.

As with any topic laid at the feet of the internet hate engine, ‘everyday carry’ equipment has been flogged to death and mangled beyond recognizability. It’s become a meaningless trope; an outlet for guys who are obsessed with gear waylay others with baseless opinions, jargon, and catch phrases like “It works for me” when they argue their bad choices.

What we almost never see is a dedicated discussion of why you’re carrying equipment in the first place. That’s what we’re interested in, because as we’ll see, EDC should be the end result of a process that involves cultivating skill and mindset. It’s not a solution that you can just go to the local store and buy.

From a rational perspective this is a waste because not everyone has the same options, but more than that:

Both sides are rife with the false dilemma logical fallacy. Why? Because there’s no right answer.

Our intent here isn’t to tell you what the right equipment is. It’s to give you some ways to think about the problem so you can best answer the question for yourself.

One of the most common problems we see with people’s efforts to choose gear is that they don’t understand how emergencies happen, and therefore, they’re randomly selecting things that might help them in some undefined circumstance. With the approach laid out in understanding emergencies, however, we have the intellectual framework to make good sense of what might happen and how we can best deal with it.

Probability, Skill, and Lines of Equipment

Now that we’ve covered the Types of Emergencies, we can introduce a couple more concepts:

This metric is used in conjunction with our Types of Emergencies to determine if we’re really at risk:

Are we close to a high crime neighborhood? Do we live on an active fault, or in a location affected by hurricanes? Or do we live in an adult family home in Upstate New York? Does a guy in Kentucky have the same options as a dude living in a flat in Westminster?

We’ve gotta start with “what are my options” and more importantly: “what are the threats”?

After assessing the threats for your region, it helps to make a Punnet Square to prioritize. What we want to do is identify the high likelihood, high impact events and build the skill necessary to deal with them first. It’s often asked “why would a citizen need a gun?” While we don’t want to get too off the rails with justifications, let’s look at some facts:

Civilians shoot criminals at between 66-75% the rate the police officers do. The notion that all cops run around shooting it out with bad guys all day is absurd and according to Pew Research (go ahead, laugh at the irony) the vast majority, 73%, never fire their weapon in the line of duty.

So really, neither police nor citizens are overly likely to have to kill someone in self defense.

But the firearm’s role in protection is a little more complicated. What are your chances of firing a weapon and not taking a life?

Kleck and Gertz studied the role of guns in civilian hands and the circumstances around them exhaustively, and what they found is that of those who fired a gun to stop a crime, very few resulted in the criminal being injured or killed. They estimated that citizens simply having firearms stopped crimes up to 3 million times per year – that’s closer to a 1/100 chance. That’s substantial and even if we look at the low estimate of ~989,000 incidences of civilians using a firearm to stop crime, that’s *still* about 1/325. That means the chances of using a gun to defend yourself – should you choose to carry one – aren’t far fetched.

While we’re talking numbers, another common discussion in the EDC package is the “average” gunfight; what distance, how many rounds, what type of guns, ad nauseum.

Our view is simple:

Push this out of your head as a method of defining what you do or don’t need to do.

We want to cover as many possibilities as we can, because if we’re being honest with ourselves, all gunfights are outliers, and all of them are extremes. We don’t need to be ready for the average, we need to understand the spectrum (from conversational distance fights to 80 or so yards) and work on the most common problems first. Once that’s done, work your way out. Fight the biggest guy, shoot the farthest target, learn to pack a wound, and pick the high security locks.

Use the same Punnet square; the highest risk, highest probability is close range asocial/interpersonal problems, so start there and take ECQC with Craig Douglas. It will help develop your communication, your grappling, and your awareness in addition to giving you a pressure tested taste of what conversation range fights with guns feel like.

To deal with the knowledge that emergencies are really a function of two metrics (Duration and Intensity and Probability and Impact) and with the admission that, as we say in Spheres of Violence, bad things happen to good people without explanation, it’s logical to conclude that at some point in your life, you may be faced with an emergency that requires you to act.

So what does that mean for us?

We have to have some skill, and this is where we really want to drive our point home. Skill makes us efficient, and efficiency buys us time.

Duration is one of the critical elements of our emergencies, so anything we can do to buy us time gives us options as to how we react. A person who neglects skill, conversely, has less options and less time to make their decisions. We settled on “Integrated Skills” because of this: a person who has a gun during a fight has options, but a guy who has some skill at grappling, an edged weapon, a sidearm, and some experiences has more options.

We break skills down into five basic categories:

Part of our protective skill set is knowing when and how to employ weapons in a way that doesn’t set us up for failure by trying to ‘defang the snake‘. It means knowing how to quickly apply a tourniquet that will work, and not just try and jam a tampon into a bleeding wound. Skills guarantee that when it comes to action, we can be relied upon to make decent decisions under pressure. Unlike access to equipment, or control over circumstance, our level of skill is the one thing we can absolutely control.

Once you’ve gone through the process of identifying the things that could affect you or your loved ones, you build the skill to make sure you’re not caught with your pants down. After you’ve developed the skill, you’ll have an easier time nailing down the right equipment.

Putting this all together, if you live in an affluent area where you work from home, but you live in an area commonly threatened by natural disasters, you might not need to go around carrying a full sized pistol, a tourniquet, and a flashlight and multi-tool, but because those are your circumstances doesn’t mean that other people wouldn’t benefit from carrying more equipment for their circumstances.

Furthermore, skill gives us options but equipment streamlines how we apply skill. Can you try and improvise a tourniquet, or a water filter from a used water bottle with sand and charcoal in it? Yes, you can. It’s good to know how.

…but improvising will never be as good as a purpose built item.

The last step is determining what you want to carry.

Given our skill groups, we have four items we believe help us in the pursuit of being useful:

Our reasoning can be found in the link, but essentially, biology hasn’t served us with a efficient cutting edge, a way to make heat or light, or a way to exert leverage. If you end up stranded on a backcountry road, you can improvise anything you might need with these tools… If you’re so inclined, they also allow us to fix common problems for ourselves and others, and if you travel outside the U.S., they should still mostly be available. While we advocate having them on body, dress code and lifestyle might make it a no-go. That’s fine too.

Once you’ve built the intellectual framework, you’ll start to view your equipment as more than just stuff you’re wearing that either cripples your style or makes you feel cool; it’s useful tools that you know you can apply quickly for a desired outcome.

When you consider the lines of emergency and how your lines of equipment interface with them, what you carry and why will be more reasoned, justified, and accessible.

So when we discuss lines of equipment, it’s not just random – they correspond with our ability to both identify and manage the Types of Emergencies

How to Wear it

First, this is largely a matter of what you want out of your equipment, but we caution you to be consistent if you can. Even among our team, there’s a wide range of differences in how we approach EDC. One of the realizations we try and acknowledge is that in the last 10 years, a lot of new gun owners entering the world of firearms aren’t “gun people”. They’re not going to wear 5.11 tactical pants with a riggers belt and a G19 in an outside the waistband holster.

They might carry Ruger LCPs in Flashbang holsters, or a j-frame in a pocket; so our goal is to assist people in finding the best practice for them, even if we don’t think the method is optimal.

What we want to say on this topic is: accessibility and retention are the most important things. If you can’t access your tools while sitting, on your back, grappling or buckled in your vehicle, rethink how you’re carrying. Likewise, you need to do everything you can to prevent it from coming loose or being taken from you. This is especially a problem with a lot of the belly band or elastic ‘holsters’ marketed to women. If you can’t run, jump, climb, or fight in it, don’t rely on it.

Keep it concealed. No one needs to see your gun. Some people in some places can get away with open carry, but unless you’re in a profession that requires you to open carry, you’re handing one of the most significant tactical advantages you have over to your adversaries: that element of surprise.

Lastly, we want to be able to access our 1st line gear under our second line. If you can do these things efficiently, you’re on the right track.

So, if there’s a mass shooting, and you find yourself in Gym shorts and a .22 airlite revolver, are you wrong?

No. You just have different options than a guy who’s carrying a full sized pistol, or who’s recovered a rifle from his vehicle.

If you’re the guy rollin’ with a rifle in your trunk, are you wrong?

No. As long as you’ve correctly assessed the risks of leaving a weapon in your car and don’t leave it unsecured.

So who is wrong?

The guys who do these things without giving them thought, building the necessary skills, and then selecting the equipment that makes you as efficient as possible.

Don’t waste your time with squawking over whether or not you need a reload – get the skills, assess what’s likely, then identify what equipment will make you as efficient as possible. When it comes to telling you what you need – everybody’s wrong. Only you can define your needs, but fair warning: starting with gear just makes you wrong, too.

Thanks for reading, ladies and gents. We appreciate y’all.