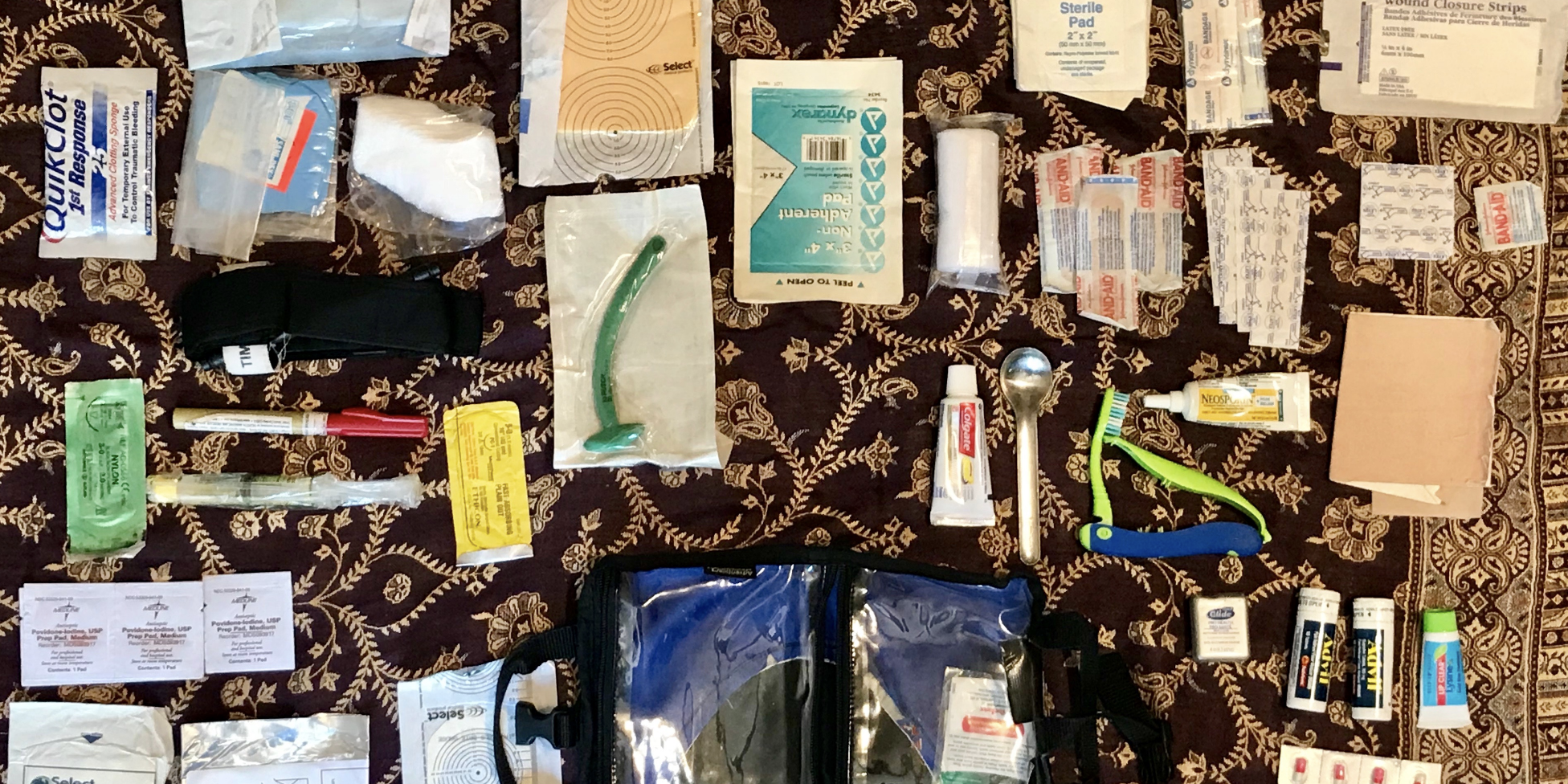 Often, discussions of medical equipment center around wound packing, tourniquets, and chest seals… but what are we missing when we skip straight to trauma?

Today, a member of the ISG community came across a medical situation. As we often say, you may be “Responder Zero” in a situation… the person who shows up first and has a direct impact on the outcome. When we discuss medical situations, especially in the martial community, we often end up talking about hemostatic, chest seals, tourniquets and gunshot or stab wounds.

It’s easy to forget that those events are, by their very nature, less common than being involved in a gun or knife fight or being accidentally shot or stabbed.

So, while it’s great to take that step and get some training in bleeding control/’stop the bleed’ and carry the tourniquet or hemostatic, don’t forget that the vast majority of situations you stumble upon won’t require them, and you’ll be called upon to do a lot less exotic tasks. As a part of our approach to skill building, let’s ensure we don’t forget the most common, easy to solve problems by getting ahead of ourselves and trying to solve the more complex challenges.

As you probably know, we identify emergencies by category:

However, this leaves out a significant number of non-emergency situations that you as a citizen, first responder, or service member could find yourself involved in. So, how does this “Type 0” problem fit in to our overall plan?

While the purpose of this article isn’t the ISG emergency response framework, it does help to be familiar with it, as it ties in to how we assess, equip, and train for these challenges.

Often times, when you come across a problem where someone has fainted, had a seizure, cut themself, or something similar, and people mentally stall out because they don’t have the tools they’re used to having.

This minor environmental change can flip the switch from “OK, let’s grab some Neosporin and Band-Aids” to a loop of confusing inaction.

Another major issue is that it’s really hard for a person who hasn’t spent time responding to emergencies to quickly and accurately gauge the severity of the situation. Because of this, we see people panic when there’s really no major cause for concern or sort of spin their wheels because they don’t have the tools they’d normally have if they dealt with a similar situation at home.

In Feb of 2018, a co-worker and I saw a man hit a bridge abutment, and his car launched about 15 feet into the air, disintegrating as it went, flying off a bridge. When we got to the car, there were parts of it sprawled out over 50 yards, and the man was trapped upside down in a few inches of muddy water. I expected he’d be dead as Dillanger.

Turned out, he escaped with no major injuries, only a few small cuts and really only risked thermal injury being wet and cold.

So when we went to treat him, I used a combination of a seatbelt cutter I keep on my 1st line (EDC) and then brought him to sit in a warm vehicle while we used bandaids from our vehicle kit to stop some real superficial capillary bleeding.

When we organize our equipment on our person, we do so with the expectation that we’ll be able to address the Type I Situation in a way that matches our skills. For example, We keep the tools needed to fight or stop arterial bleeding on our person, easily accessible.

That said, for the Type 0 problem, we aren’t looking to stop an immediate threat to life; we have some time to think about the approach and the necessary equipment. We recommend people build and keep a “sustainment bag” and a Vehicle First Aid Kit that ties together readiness for the Type II emergency with some basics that help us manage both trauma and smaller problems.

The idea here is that within your pack and vehicle, you should have a way to scale up or down the treatment to match the situation – again, within your level of training and ability.

Applied to a more serious, Type II Disaster, having some basic ways to treat infections, cuts, and minor pain can really do wonders for your position within a community. During my time in Afghanistan, I often received information or favors in trade for bandaids, NSAIDs, or antiseptics.

Those things were in short supply for the locals, and common injuries were often far more severe than they had to be. Being provisioned well enough that you can help others out of your backpack or vehicle, and then resupply at home will give you some latitude to help in ways that will help forge friendships and allies.

Don’t discount the importance of this in a collapsed environment, and don’t forget that ongoing care is also crucial.

Putting together a couple kits can be as simple as buying something over the counter and restocking it, but here are some of the things we’ve found useful to have for a wide variety of non-life threatening injuries:

When you do come on to the scene of a minor emergency, you’ll probably find that the people there are looking on without doing much. Some will be filming it with their cameras, others will be making comments like “oh my God they’re definitely dead”, etc. Ignore them and don’t trust a word they say. Look at the victim(s) and assess for yourself. One time, I came across a guy giving CPR to a man who was laying on the ground.

I remember thinking “give it up, he’s dead”, but not knowing why. Later, I remember looking around and seeing the blood on the dead man’s head was dried, there was dried blood in the surrounding environment, and it clicked that I’d put together duration the man had been down without really thinking about it. This isn’t some natural ability – it requires some familiarity with dealing with emergencies – so if you can, go cultivate that skill by volunteering at a hospital or a ride-along with your local PD if you’re not already in a field that gets you some exposure.

What we want is to reach a threshold where you’re comfortable not being a bystander, giving some simple directions to people who *are* stuck in mental neutral, and having access to the right tools for the job.

Often left out of this equation is this: Sometimes you need to be a bystander.

Keep in mind that if you’re a first responder, your interaction with the public isn’t categorically good. They’re dealing with some of society’s least capable/competent people on a daily basis, and often enough, those people are just rollin’ in the Juice and have no idea where the limit of their knowledge is.

When you encounter an ambulance crew or police officer, give them some brief information:

They’ll appreciate that you’re not talking their ear off like every other ‘witness’, and once they arrive – you’re done.

Let them do the rest.

Another major note on this topic is medical knowledge changes. It advances frequently, and an experience 10 years ago doesn’t guarantee best practice on a problem in the future. Periodically recertify on CPR/First Aid/AED, Bleeding Control, and try and diversify your skill base by getting a Wilderness First Aid course or the like.

Developing these skills will help create a positive feedback loop: The more you learn, the more you are able to help, and the more able you are to identify the proper tools for the situation. Stay committed to having the trifecta of skills, experience, and tools.

As with many things, responding to these kinds of events is largely up to chance. You can put yourself in a position to be of assistance, and never be called on. That’s ok. There are no guarantees you’ll get the experience you want in life – just do your best to be ready of you are called upon.

Always be learning. Always be an asset.