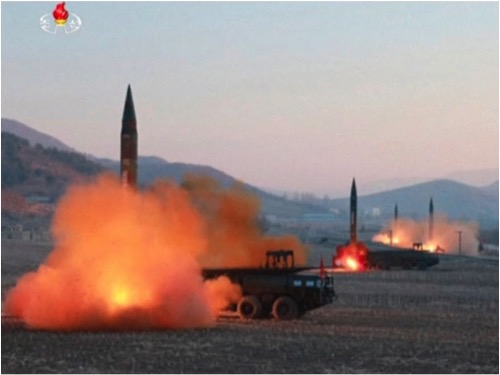 The ISG Weekly Information Summary: An unbiased look at the happenings around the globe, and how they could impact life closer to home. May 6th, 2019.

On Sunday, North Korean media reported that Kim Jong-un personally oversaw live-fire drills testing the DPRK long range rocket launchers and a new short-range missile. Further reports noted that the communist nation had put its troops on a high alert posture. These moves gave rise to diplomatic concerns from South Korean and Japan, who claim that the drills violate agreements to decrease hostility on the Korean peninsula.

This move is likely born of frustration. Kim Jong-un has sought for years to gain international recognition for his country. Delays in talks with the US have proven to be a sore spot, particularly after the initial burst of progress. By rattling the saber, Kim may be trying to remind us all that he’s a threat and get the ball rolling again.

Officials from over 30 nations across the EU and NATO gathered last week to draft guidelines for 5G security as the wifi services rolls out around the world. Focusing on shared security and policy measures, the participants paid particular attention to the dangers of hardware from third party suppliers. No agreement was reached; apparently further discussion was needed. However, most of the major players agreed that further efforts were needed and the momentum had to be kept going.

Let’s be honest: this is about Huawei and the ongoing concerns about espionage and their ties to the Chinese government. And it’s a growing concern, as Huawei is working to position themselves at the center of the 5G market. China is making moves globally, working to expand its influence across Central Asia and Africa. Likewise, the US and other western powers are working to counterbalance Chinese influence and retain global hegemony.

Turkey is balancing diplomatic and defense needs as it seeks to buy both Russian and US hardware. US officials have threatened to block sales of F-35 maintenance parts to Turkey if Ankara insists on going forward with the purchase of Russia’s S-400. US officials have repeatedly voiced concerns about having Russian technology and technicians working with or around US materials. This is further complicated by the fact that Turkey as a NATO member is involved the manufacturing of F35 components.

Like China, Russia is playing games in an attempt to shore up its sphere of influence. However, while China’s focused on expansion, Russia seems to be trying to hold ground. Turkey has historically been a rough spot for Moscow, as the Muslim nation controls access to both the Mediterranean and the Levant. Russia has taken an interest in the ongoing events in Syria and Yemen, and finding a balance with Turkey is a vital part of that. The Kremlin’s handling of Turkish forces shooting down their Su-24 fighter jet set the world on edge back in 2015 seems to have set the Russian Federation up in a position of diplomatic superiority in their dealings with Turkey.

This is not only important for the Russian’s – Turkey is a key ally for the United States, and the US’s ability to project airpower throughout the region is largely based upon Turkey’s continued alliance with the U.S. So while the United States struggles to maintain diplomatic relations with Turkey and Erdogan’s government (who has turned a blind eye to smuggling from Afghanistan, Pakistan, and the ISIS presence in Iraq and Syria), the Russians seem more than happy to support Turkey as the friend of a friend…

Due to climate change, decades of mismanagement, and years of war, Afghanistan is in the midst of a water crisis. Gripped by the worst drought in recent memory, sporadic rains have led to flash floods, devastating entire communities and forcing many to relocate to the cities. Now the cities themselves are running short of water, forced to rely on low quality wells or tanker truck delivery.

Afghanistan has not been a stable nation for some time. As peace talks between the government and the Taliban continue and the US’s role in the region changes, the focus will shift to internal issues like water. The Afghan government has big plans, for dams, canals, and reforestation. This raises further issues of funding, local cooperation particularly in the tribal regions of the country, and foreign relations. Afghanistan is a headwater nation, with 80% of its rivers flowing into other countries. As Russia makes moves in Central Asia and China pushes forward with the belt and road initiative, expect to see both countries investing in Afghanistan’s water development, following the same model China used in Africa.

Venezuela is in the grips of a full scale crisis, with over 5 million of its people seeking refuge abroad by the end of 2019. While Donald Trump has offered his repeated support via Twitter, his actions on the issue stand in sharp contrast. President Trump has resisted applying the Temporary Protected Status (TPS) designation to Venezuelans. TPS allows individuals from certain countries to remain in the US due to extraordinary circumstances in their homeland. Instead, Trump has repeatedly called for support for Guaido.

Trump is once again walking a fine line on immigration: dealing with the repeated issues on our southern border while attempting to balance human rights concerns at home. A flood of Venezuelan refugees would be political dynamite. Here we see Trump balancing a number of issues: domestic pressure, the Lima Group, and Russia’s renewed interest in Venezuela.

For decades, China has been growing as both an economic and political/military power. Its expansive economy, military development, and political clout in Asia have been a concern for several US administrations. However, in 2019 growth seems to be slowing, leaving China’s future once again uncertain. China’s central bank has lowered the amount of money banks must hold in reserve, freeing up over a hundred billion dollars for lending and investment. New tax policies and currency moves are designed to keep growth alive. Public spending on infrastructure is meant to create jobs.

All of these moves point to the same thing: Chinese authorities know that an economic slowdown is coming, if not already here. China’s growth in 2019 is at multi-decade lows, and a further retraction seems inevitable. Likewise, China’s debt and currency manipulation are also worries: they’ve hampered growth for years and may have directly led to the current slowdown. The Trump era tariffs are acting on knowledge that China’s economy MUST continue to grow, or it’s debts will become insolvent.

This comes at an interesting time for both China and the world. The Middle Kingdom is certainly pushing outward, with major initiatives in Central Asia and the South China Sea. It is also facing pushback, chiefly from the US. American diplomatic efforts are securing alliances with key players in East Asia, potentially including North Korea. It is odd time, but China’s military growth, economic slowdown, and diplomatic adversity may lead to a conflict in the middle term. As always, we shall wait and see.

The US has deployed an aircraft carrier group and bomber group to the Persian Gulf, in what officials are describing as a “clear and unmistakeable” message to Iran. The USS Abraham Lincoln and its supporting craft are en route to the region at the time of this writing.

The US has been at odds with Iran since the 1970s, if not longer, and it’s not unusual to see the White House turning up the heat on occasion. The Trump administration in particular has used this kind of carrot and stick diplomacy before, most notably with North Korea. It’s entirely possible that this carrier deployment is just that: a show of strength leading up to a diplomatic overture designed to de-escalate a long term conflict. A lot depends on both the regional/international response and Iran’s own efforts, so as always we’ll have to wait and see.

If you’ve enjoyed this information summary, please share it with your friends so we can continue to expand the reach of unbiased journalism on today’s important issues.