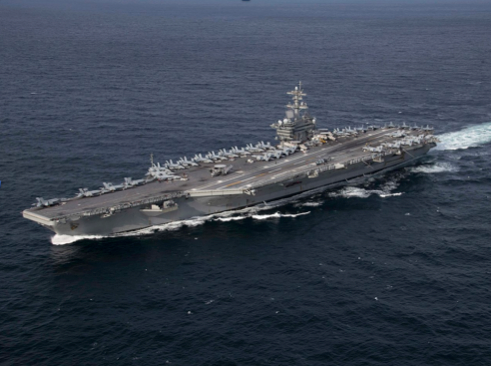 The ISG Weekly Information Summary: An unbiased look at the happenings around the globe, and how they could impact life closer to home. May 13th, 2019.

Tensions have once again spiked between the US and Iran. On May 6 US official announced that the USS Abraham Lincoln Carrier Strike Group would deploy to the Persian Gulf in response to “a number of troubling and escalatory indications and warnings” allegedly originating in Iran. A few days later, May 10, US officials announced another unexpected deployment, this time sending a number of B-52H Stratofortress bombers to a US base in Qatar in response to unspecified threats.

This deployment is a response to a steadily escalating showdown between Iran and the US over a number of issues, including the former’s nuclear program. Iran has expanded its efforts to enrich uranium to near-weapons grade levels in defiance of a 2015 agreement from which the US withdrew over a year ago. The theocratic nation issued a related ultimatum to Europe, with Iranian leaders giving European signatories to the 2015 agreement 60 days to fulfill their commitments or face a further Iranian withdrawal from the deal.

This is a complex moment in history, with every major player seeking to fulfill a number of different motivations. It’s not unlikely that US military deployments are a component of the kind of carrot and stick diplomacy which Trump used with North Korea. Certainly it made some progress there, opening talks between the DPRK and South Korea/the US. Iran, thus far, has remained defiant; the Revolutionary Guard has publicly stated that “not talks will be held with Americans and the Americans will not dare take military action against us.” This statement would suggest that Iran understands the diplomatic component here and is either rebuffing it or holding out in hopes of securing a better deal. Further complications remain however: Iran’s ongoing proxy war against Saudi Arabia in Yemen is taking some interesting turns, further complicating any diplomatic or military effort in the region. Europe’s response likewise remains uncertain, and all of the above will shape whatever final outcome ultimately emerges. The chance of a direct shooting conflict between the US and Iran remains remote, however any escalation is potentially catastrophic, and would invite a response from the world’s other major powers.

Migrants, refugees, and the border pose ongoing issues for Mexican officials, as they struggle to balance their national needs with both US policy and the ongoing movement of refugees and migrants. A US federal appeals court has ruled that the White House can order migrants to wait in Mexico while policies are being clarified and applications processed. Currently  over four thousand Central American asylum seekers are being held on the Mexican side of the border, with the US seeking to expand those numbers. This is in conjunction with the over 13,000 Central Americans already waiting for asylum at border crossings. They wait as lists are reviewed and applications processed in what some critics call a haphazard fashion. This is a source of both fear and concern for residents of Mexican border communities.

Further issues have arisen in this already complex situation. Mexico is an obvious means of entry to the US for refugees and migrants from Central America and the Caribbean. However, it is increasingly the preferred means of entry for refugees from sub-Saharan Africa. The ongoing issues in Libya and the resurgence of a slave trade in that region have led many African refugees to believe the route to Europe is no longer safe, thus pushing them to cross the Atlantic and seek access to the US via Mexico. This is an additional strain for Mexican officials, who are often ill equipped to deal with the language and cultural barriers involved—not to mention the swell in the number of people involved.

This issue isn’t going away. Moving into the 2020 election cycle Trump is unlikely to back down on his border stance. US defense officials are actively and openly discussing further military involvement with the border in response to rising concerns around a growing number of refugees and a resulting loss of control of the border. Any moves by the administration will face sharp opposition in Congress, adding an additional layer of complication to all aspects of the issue.

Within recent memory, measles was on the decline in Europe. Now it’s in resurgence, with 34,000 new cases in the first two months of 2019 alone. These new instances of the disease occurred across the continent, with the bulk (25,000) appearing Ukraine. 30 deaths have been reported thus far. Experts from the WHO and the CDC report that the outbreaks could spread without a coordinated and timely response. US officials have suggested that a European outbreak could spread to the US, which faces its own growing issues with the disease.

The question for many is the cause of the outbreak. Likely it’s multi-causal: uncontrolled migration likely plays some role, but a major contributor is likely to be a growth of anti-vaccine sentiment in developed nations. Many adults in the first world aren’t old enough to remember exactly how bad the disease could be: measles can cause blindness, neurological damage, and death. Expect measles, and diseases like it, to become part of the dialogue about immigration and refugees/asylum seekers, make sure your vaccines are up to date, and keep an eye out for travel advisory warnings before going abroad.

Regardless of how you feel about vaccinations, the lasting effects of diseases like Measles or Polio are unarguably worse, better documented, and more damaging to the population.

The hacker collective Fxmsp breached three major US antivirus companies, according to a report released on the 9th. They offered to sell the information thus gathered and network access for $300,000. Fxmsp is well knowing for gathering and selling such information on governments and corporations internationally. The attacks took place on April 24.

The mechanics behind the attack were fairly conventional, if well executed. The most interesting component was a botnet which stole relevant credentials in an attack against multiple targets. Beyond that, the attack was largely comprised of actions using remote desktop protocols and active directory attacks.

Given that Fxmsp is at least partially Russian, this has some political ramifications in the US as concerns about Russian hackers influencing elections grows. Given that the targets were trusted antivirus companies, it fits the Russian hacker MO of undermining faith in US institutions. Attacks like this are unlikely to affect any one individual, but those concerned with the digital privacy and security may wish to look into alternatives to conventional operating systems and security measures.

Bitcoin has had a wild ride for the last few years, hitting an all time high in December 2017 and then almost immediately collapsing in value. Fortunes were made and lost, but diehard crypto fans insisted a return to form would come. As of this writing, it may have. Bitcoin has risen in value over the last month, reaching a current high of 6,000USD.

Bitcoin pricing, like all cryptocurrency pricing, can be tricky to explain or understanding. Int his case, the rise in value is likely linked to a series of coordinated coin purchases in East Asia last month, which ISG discussed in a previous INFOSUM. Another factor is Facebook’s potential plan to launch its own cryptocurrency, which might reinvigorate the market by drawing in new investors.

The humanitarian costs are vast—it takes a grave threat to force people away from their homes. The ongoing suffering of these refugees is a major concern. Likewise, their plight has geopolitical implications. Forced to flee, many of them risk death or enslavement; the route to Europe via North Africa is fraught by the risk of modern-day slave hunters. Geography may push them from one conflict zone to another; travel via Libya or the Levant isn’t safe these days. And as we’ve pointed out in a previous section of this article, refugees often seek unconventional routes to safety—for instance fleeing African nations and attempting to enter the US via Mexico.  The issue is likely to intensify over the course of 2019, forcing national and international entities to come up with new responses.

Yemen’s internal conflict has been an ugly one, generating millions of refugees both internal and external and providing another potential flashpoint in a region dominated by conflict. Effectively, this is a proxy war between the Saudi-backed government and the Iran-backed Houthi movement, with other players entering on the sidelines. This week saw what could be a major step toward peace: Houthi rebels withdrawing from Port of Saleef, near Hodeidah, Yemen, under the auspices of a UN-backed deal intended to revive the peace process.

This is undoubtedly a step in the right direction, but will it actually kick-start the peace process in Yemen? At this time it’s difficult to say. While this is a good move internally it is jeopardized by other factors in the region, including the ongoing tension between Saudi Arabia and Iran and the potential for US military intervention. It may be that the UN seeks in part to de-escalate the brinksmanship between the US and Iran by moving forward with peace in Yemen. It may be that Yemen’s issues will worsen as the US and Iran square off. The only thing we know for now is that one small positive step has been taken in an troubled corner of the world.

On May 11, a team of gunmen stormed the five-star Pearl Continental Hotel in the southern Pakistan city of Gwadar. At least five people were killed, including an armed security guard. Damage was limited due to a quick response from security forces in the area. The Baloch Liberation Army (BLA) has taken credit for the attack. They are a separatist group, fighting for the independence of Balochistan province, in which Gwadar is located.

Separatist attacks and killings are a regrettable reality of our world, as the post colonial order continues to shift in developing regions. This one, however, is especially noteworthy for reasons other than the loss of life. Gwadar has long been a key piece of strategic real estate, located on key trade routes between the Indian Ocean and the Persian Gulf. It’s long attracted international interest for this reason, and most recently China’s had an eye on Gwadar as a naval outpost. Gwadar Port is owned by a Chinese company, China is investing heavily in the region via the China Pakistan Economic Corridor and the belt and road initiative. The BLA attack is not just about independence from Pakistan, but rather about a rejection of the enforced globalization of Chinese neo-colonialism.

On Thursday, US official announced that they had seized a DPRK cargo ship, the “Wise Honest”. US official allege that the vessel was in violation of international sanctions against North Korea. The seizure came on the same day that the DPRK test fired two missiles into the sea.

The “Wise Honest” was en route to Indonesia at the time of its capture, traveling under a false flag. The ship is primarily used for coal transportation, a vital source of fuel for the DPRK. It is the second largest North Korean cargo ship.

This action by the US is pretty transparently an attempt to move North Korea back to the diplomatic table and force talks to resume. While this is the first time the US has seized a vessel for violating sanctions, it’s not the first time fuel has been used as a bargaining chip/strongarm tactic against the DPRK. China has cut fuel supplies in the past to bring North Korea back in line, and the US has used sanctions toward that end for decades. Whether or not this particular action will have a restraining effect on North Korea or increase its military stance remains to be seen, but it’s another critical moment in an evolving situation.

We hope you’ve enjoyed this week’s information summary. If you did and haven’t already, please consider subscribing.
Cheers,