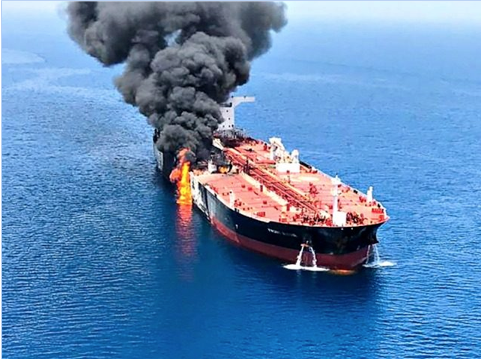 The ISG Weekly Information Summary: An unbiased look at the happenings around the globe, and how they could impact life closer to home. June 17, 2019.

One of the biggest stories this week took place in theStrait of Hormuz, the body of water connecting the Persian Gulf to the Gulf ofOman. Two tanker ships were attacked, resulting in explosions at or below waterline and crippling both vessels. Both crews were successfully evacuated byIranian and US forces operating in the region. As of now there is much speculation as to the cause of the explosion—ranging from rockets to small vessel attacks to errant mines—but not much is certain.

What is certain is the political response. Saudi Arabia is blaming Iran, and the US has released video which it claims shows Iranian forces removing a limpet mine from the hull of one of the tankers. Iran has denied any involvement in the attacks, suggesting instead that they were staged by a party interested in derailing Iranian diplomatic and military efforts in the region.

We would remind our readers that this is an evolving situation, and much of the “news” available right now is incomplete, speculative, or both. Tensions are running high in the region, chiefly betweenIran and the US/Saudi alliance. Other nations are involved, seeking to expand their respective spheres of influence. As such there are many parties that could benefit from this incident and may be behind it. We simple don’t know at this time, but this is a story that very much bears watching.

Citing a need to defend democracy via the impeachment of the current president, more than 100 rallies took place around the country onSaturday June 15 as part of MoveOn.Org’s “Impeach Trump” day. Democratic luminaries such as Rashida Tlaib, Jim McGovern, and Madeleine Day are schedule to speak at various events. At the time of this writing, no information has been released about the level of event attendance. Speaking in advance of the event, Tlaib said  “I sincerely hope that after this Saturday, my colleagues on Capitol Hill will answer the call of the likely millions of Americans that will rally across the country and finally open an impeachment inquiry into the actions of President Trump.”

Rallies and protests are nothing new in America; the question is how they fit into the broader social and political context. It could be that these events are yet another sign of a growing schism in American public life and the looming conflict within our nation. It could be thatMoveOn.Org is struggling to maintain relevance in an increasingly contested political landscape; the fractured nature of the American left makes it hard to maintain a base. We note that the event webpage is scant on the actual charges for impeachment, suggesting yet again that MoveOn is trying to build street cred rather than push real issues. Time, as always, will tell.

Over 5,000 people in ICE custody are under quarantine for having been exposed to mumps or chicken pox. So far 39 total cases have been reported. The vast majority of them—4,000 or so—were exposed to mumps, with a minority being exposed to chicken pox or both diseases. This quarantine effects roughly 10% of the total number of adults (52,000) in ICE custody at the moment. DHS officials blame the volume of people crossing the border and the unprecedented crowding at ICE facilities for the outbreak. Overpopulation and insufficient sanitation are key conditions for spreading the disease. Mumps has long been a relatively rare disease in the United States, but the number of annual cases has been on an upswing for a number of years.

ICE detention facilities and border security are very much n the news, as the controversy over how to handle an increasing number of migrants headed to the US rages. Trump has recently reached an agreement withMexico that may in part help stem the tide. However, with 50,000-plus adults in custody and more likely on the way many questions remain. An outbreak of disease—coinciding with typhus and measles outbreaks around the US—raises real concerns about health and safety while additionally fanning the flames of controversy and conflict. More internal arguments will likely come from this; we shall see.

Partially in response to ongoing and escalating tension between Iran and the US in the Persian Gulf region, Iran has stated that it will continue to scale back compliance with the 2015 nuclear deal. President Rouhani made the announcement during a meeting of Asian leaders in Tajikistan.Rouhani stated that he would need to see “positive signs” from other signatories in order to maintain any level of compliance. For the moment, other signatories—including major European powers—have been reluctant to act due to increasing financial pressure from the US. Iran has set a deadline for nuclear enrichment exceeded the levels set by the treaty—June 27, only 10 days away at the time of this writing.

Here we have another piece in a very complex puzzle. The US and Iran have been at loggerheads for years, recently over their shared involvement in the ongoing Yemeni Civil War—which is effectively a proxy conflict between Iran and Saudi Arabia. As a longtime Saudi ally, the US is in the uncomfortable position of potentially launching into another sustained conflict in the Middle East, something the current administration had sought to avoid.The recent tanker attack off Oman may have inspired this—Rouhani did not mention it directly however. Iran is playing the long game, and US actions in the region in the coming weeks are critical in determining the outcome.

After over a week of protest leaders in Hong Kong have suspended a pending bill that would have allowed residents of that city to be extradited to mainland China to face legal charges there. The suspension has received public support from Beijing. A spokesperson for China’s ForeignMinistry said the following: “TheChinese Central Government expresses its support, respect and understanding for the SAR government’s decision and will continue its staunch support for ChiefExecutive Carrie Lam and the SAR government in governing Hong Kong in accordance with law and upholding the SAR’s prosperity and stability with people from all sectors.” The Ministry spokesperson further noted that the PRC would continue to uphold the “One Country, Two Systems” arrangement. Interestingly, protests have continued despite the bill’s suspension, drawing millions of HK residents out into the streets.

The PRC’s growing influence is Hong Kong is an issue of some concern to many residents of that city. Hong Kong’s democratic institutions and economic freedom are highly prized by its people, and encroachment by Beijing is regarded with suspicion.The PRC has been flexing its muscles both internally and externally, attempting to solidify its military and economic hegemony in the South China Sea and across Central Asia while stamping down on Muslim separatists at home. However, the game is complicated by an ongoing trade war with the US, which has expanded to include Hong Kong. So: is China responding to popular and international pressure in backing off, or are they waiting for a more opportune moment? It remains to be seen, but this is an issue worth watching.

A prominent IT security firm reported on Friday that the hacker group known as Xenotime has been probing key components in electrical grids across the US. Xenotime became infamous in 2017 when they successfully attacked an infrastructure site in the Middle East, triggering a dangerous and sustained outage. This time, they seem to be targeting infrastructure in the US and across the Asian Pacific. As one expert put it: “The threat has proliferated and is now targeting the US and Asia Pacific electric utilities, which means that we are no longer safe thinking that the threat to our electric utilities is understood or stable. This is the first signal that threats are proliferating across sectors, which means that now we can’t be certain that a threat to one sector will stay in that sector and won’t cross over.”

The security of the US electrical grid has been along-running concern. EMP attacks, hackers, natural disasters, and old fashioned physical sabotage are all critical threats. Not much is known aboutXenotime, so we suspect that allegations about “Russian hackers” will dominate the discourse. The fact is that the internet has removed national boundaries to a great degree, and the possibility exists that Xenotime is purely a non-state actor. This is not a passing issue, even if Xenotime’s motives remain unknowing. ISG readers should look to their preparations for an extended grid-down event.

An outbreak of Ebola has authorities in Uganda rushing for solutions for both containment and relief. The disease spread to the nation from neighboring Republic of the Congo, which has been grappling with its own outbreak for several months. A five year old migrant introduced the disease whilst fleeing the Congo outbreak. While the situation is serious, the WorldHealth Organization stresses that the incident does not constitute major cause for international concern, or a  “public health emergency of international concern” or PHEIC in their jargon. The Congo outbreak has infected over2,000 people with nearly 1,500 casualties reported.

Disease and pandemics shape global affairs—we’re just past the centennial of the Spanish flu pandemic, which changed the course of theFirst World War. Disease outbreaks in Africa affect foreign aid, which in turn affects foreign affairs and trade. Both the US and China use aid as a diplomatic tool, however the latter has been far more effective in Africa in recent years. China make make use of this to expand its influence in Africa’sGreat Lakes region . . . or it may shy away to avoid further controversy about intruding into internal affairs of African nations. Time will as always tell.

This is a complex one, and we encourage you to read the article. Cyber warfare is nothing new, and the US has been conducting it againstRussia for year albeit in a low key way. Since 2012, the US has been probingRussia’s  power grid, but over the last year or so operations have increased in both frequency and severity, with military officials having greater leeway to act without direct Presidential approval. US Cyber Command refers to this as “defending forward”; IE pushing your defensive capabilities deep into enemy territory to ensure an effective response in case of an attack.

This is an interesting story: for years popular concerns have been focused on the vulnerabilities of the US grid and the US lack luster response to cyber attacks. It would seem that our Cyber Command is perhaps more capable than it seemed, and Russia and China will definitely sit up and take notice. As always we assume that there are additional capabilities far beyond the ones military officials admit to. Russian, Chinese, and American influence and goals are coming into conflict all around the world. Warfare takes many forms in this 21st century, and it is entirely possible that the next great global conflict may be fought primarily in cyberspace.