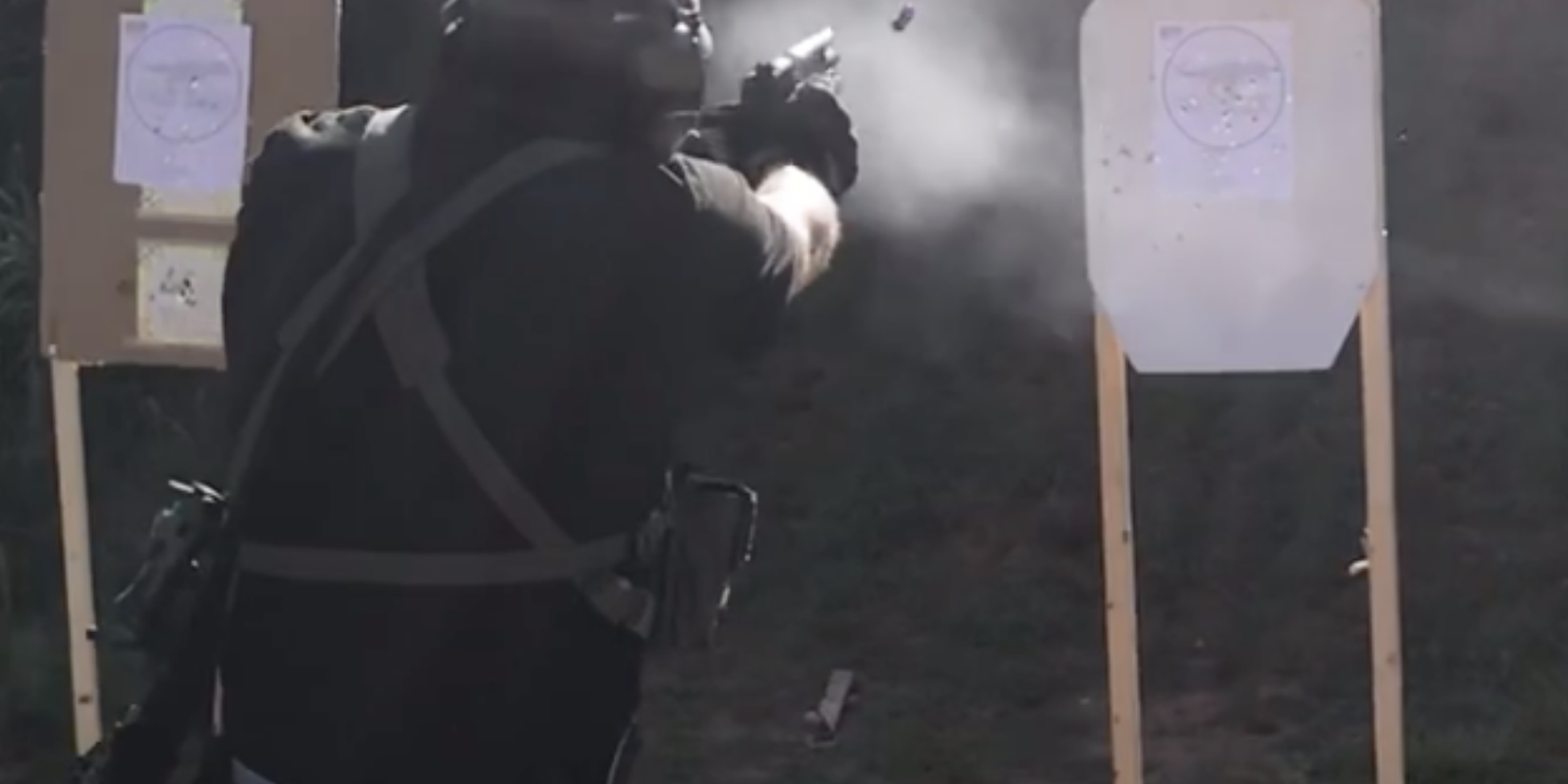 Loved and hated in equal parts, the 1911 is a piece of American firearms history that just refuses to leave… either way, knowing how to run one right is good.

The 1911, since its adoption in the year 1911, has been a uniquely American firearm. It’s large caliber, heavy construction has made it a standard bearer for old world craftsmanship and it’s long military service (it was retired in 1986 after 75 years of service, replaced by the Beretta M9) have made it the standard by which handguns were compared for more than a century. But the 1911 isn’t the golden child it once was. Advances in ballistic technology and forensic information have established a couple damning facts, and the 1911’s low capacity and heavy weight mean you get less bang for your buck.

The 1911 among the ‘in crowd’ of double stack, polymer framed, striker fired handguns is an antique, good for little more than a spot in a safe.

Between the legend and the mockery, there’s the truth, and that’s what we’re all about. So let’s discuss why the 1911 deserves some respect, but why if you choose to carry one, you damn well better be good with it.

Let’s start with why the 1911 is NOT the undisputed king of handguns that it once was. The first step on this journey is the changing place of the handgun in the civilian world. Back in the era of Col. Cooper, who popularized the 1911 and “modern technique”, the 1911 was one of the few reliable handguns available. Most citizens at the time didn’t bother carrying sidearms, and those who did were often police, or military veterans – many of whom spent a career in the military qualifying on the 1911. But outside the popular “Two World Wars!” trope which argues that the 1911 is great as a service weapon is a darker history: As is often the case, the first people to really recognize the benefits of the 1911 were criminals. At a time when Police were using riot guns and revolvers, criminals like Clyde Barrows were using short barreled automatic rifles, and semi-automatic pistols like the 1911 (seven of which were found when Bonnie and Clyde met their end). Likewise, John Dillinger carried a modified 1911 capable of full-automatic fire and chambered in .38 Super. The guns of these gangs changed, but what we should focus on is that criminals seized upon early concepts of maneuver warfare with automatic, high capacity weapons that could be quickly reloaded in gunfights. Police quickly found themselves outgunned and scrambling to equip themselves with comparable Thompson submachineguns and automatic pistols to replace the service revolvers and shotguns. Short version: Criminals are often the first to recognize the utility of tools that give them an edge. This same process would be repeated, as street level gangbangers and hustlers recognized and cannonized the Glock as the gangster’s pistol of choice in the early 1990’s, when men at arms still believed ‘real guns’ were wood and steel and had calibers no less than .40. The 1911 then, lived and died by the the arms race. It replaced revolvers as the faster, more effective option, and was later replaced by a faster and more effective option. So let’s move on and look beyond some of the undiscussed history, and get critical about the 1911.

When discussing 1911s, one crucial and overlooked point is that “1911” is a generic term, sort of like saying “Pickup Truck”. That could mean a number of different things, made by a number of different manufacturers. As with any design spanning over 100 years, there have been some changes (for better or worse), and plenty of copycats. So if we’re comparing a higher quality 1911 with a Llama that someone built in their garage out of parts they ordered from the back of a magazine, the quality disparity will be big, to say the least. More on this later. Next: it’s common to hear people justify their 1911 by exclaiming that a single round of .45 is a man-killing death-ray, while all other calibers are anemic, but the truth is that exhaustive studies completed by the FBI showed that all handguns are poor at ‘incapacitating’ humans, and none do so reliably and consistently. Often this is the root of why 1911 owners catch heat: being out of touch with facts makes you look uninformed. Further, improvements in bullet technology have produced handgun rounds that, mostly regardless of caliber, perform about the same.

The chief argument against the 1911 is now: “If it is not more lethal than a 9mm, why restrict your capacity to 8 rounds while retaining a heavier, larger frame?”

And frankly, that’s sound logic. The 1911, on average, weighs in at around 44 ounces – a whopping 2.75 pounds – while the contemporary favorite, the Glock 19, weighs in at 29.98 ounces, or 1.9 pounds. That means with the Glock, you get a pistol that’s half the weight, holds twice the rounds, and has an indisputably strong reputation for reliability, whereas the 1911 weighs twice as much, carries half as many cartridges, and has a very spotty track record for reliable service. So, let’s itemize the 1911’s handicaps: You know our next question…

Why? Strengths and Considerations

So why learn to run a 1911? Anyone who can approach the topic unbiased can see that it is outperformed by modern pistols, so why shouldn’t it be relegated to the dust bin? Well, as we discussed in previous editions of Guns of ISG, here are a few things you should consider before you toss the baby out with the dirty bath water: In conclusion, while the 1911 isn’t the undisputed king of the pistols anymore, it’s not a flintlock, either. It’s still a reasonably serviceable defensive handgun.

The 1911 costs heavily when it comes to reloading and malfunctions, but it pays you back with a comfortable operating cycle and intuitive trigger. If you’re committed to running a 1911, or are forced by circumstance to grab one, you absolutely have to have your procedural drills on lockdown.

When you’re reloading 3 times for every one that your buddy with a double stack, 9mm service pistol is, you need to demonstrate a very high degree of proficiency to offset the 1911’s innate handicaps. So let’s discuss the problems the 1911 faces in depth.

One of the first major hurdles that 1911 shooters encounter often slips right through the cracks: the non-beveled magazine well and non-tapered magazines. This design element means that there’s almost NO margin for error when loading or reloading the 1911 – you absolutely have to drive the magazine directly to the correct position, or it will result in a sloppy procedure. Compared to modern designs that have both tapered magazine wells and tapered magazines, this magnifies the 1911’s capacity deficiency by making it both low capacity and tough to reload efficiently.

Stoppages happen, and with a 1911, they’re going to happen more. Being an older, heavier design, the 1911 is a bit more finicky with regards to how it’s gripped (doubly so due to the grip safety), so in addition to closer tolerances required to feed and extract properly, the 1911 shooter requires a firm, consistent grip for best results. Ammo selection is always fairly important, but in general, straying from the 185-230 grain .45 offerings will increase the likelihood of malfunctions, as will opting for a 1911 chambered in a caliber other than .45. If that weren’t enough, lightened or shortened models of 1911’s typically suffer reliability issues as well, making smaller platform 1911’s better for carrying – but substantially less reliable than their “Government Model” cousins. Short version, if you’re dead set on a 1911, with very few exceptions, get a full framed model. Finally, one of the best insurance policies you can take out on your 1911 is good magazines (discussed below).

One of the unique beneficial qualities of the 1911 is that it’s remarkably slim, and can actually carry pretty comfortably despite its weight. Carried AIWB, the 1911 can be very quickly accessed, though it might require a higher ride. Strong side, expect that it will print, no matter what you’re doing. Vitally important when carrying a 1911 is training to draw. Given that the 1911 has two independent safeties, drawing with anything less than a perfect grip, and/or failing to swipe the external safety off as you unholster, or on as you re-holster can end in disaster. This means you’ll need to practice a very step-wise draw stroke when training on your 1911 until it’s utterly second nature and can be done under pressure without exception.

Like anything, you get what you pay for and there are things to watch out for and avoid. In our experience, very high end 1911’s still suffer some reliability issues, as do the glorified Colts – especially newer ones. Budget 1911s are known for spotty quality control and hit-or-miss results, and while we rarely give endorsements, the most consistently reliable out-of-the-box 1911’s from our experience have been Springfield Armory’s “Loaded” models. Avoid compact frames, lightened models, and odd calibers, as mentioned above. All will look great while giving you less than acceptable performance.

As with most guns, accessories are largely silly little lures to get you to blow your money on stuff that won’t help you, but the 1911 truly does benefit from a few: Don’t waste your time with recoil rod buffers, gimmicky grips, or parts that don’t have specific purposes. Some components, such as skeletonize triggers and hammers have become almost standard on a decent 1911, and they’re find additions – but unless you really know the platform, these are just more avenues to introduce errors. If you do choose to upgrade your trigger or hammer, just understand it’s almost 100% cosmetic, and it still needs to be a quality part from a reputable manufacturer. Things to avoid:

The 1911 still has a place, and if we haven’t stated it clearly, there are two strongly held beliefs regarding 1911’s at ISG:

If you can learn to work around some of it’s shortcomings, the 1911 is a solid, accurate, and durable piece. With quality magazines and good maintenance, a good quality 1911 will probably serve you well. Learning proficiency on a 1911 can have some lasting benefits when running other guns, as well. The habits formed drawing the 1911, believe it or not, translate pretty well to operating the safety on the AR-series of rifles. The last thing we can say on the 1911 is this: if you choose the platform, do it with your eyes open. Not because “.45 is only best because they don’t make a .46”, or because it was in “two world wars”. Do it because it fits you, you intend to train around its deficiencies, and you are OK with using something that requires *far* more practice to reach proficiency, because that’s what you’ll be getting. Do so understanding it *is* illogical, but not by such a wide margin that it’s bad practice. Done right, the 1911 is a great platform and a fun gun to shoot. It can even be a decent carry gun, but remember: All handguns suck at incapacitating people. All other things being equal, the handgun that can fight longer is the handgun that fights better. With that said, the majority of pistol encounters in the citizen’s world are low round count. If it ratchets up to where it’s high round count, the pistol isn’t the right tool anyway. While we wouldn’t encourage you to check the “do the minimum” box, there’s no reason to waste time ragging on guys who *do* choose a 1911. If circumstances force you into low capacity pistols and you choose to carry a full framed pistol, do so knowing there’s more to it than strapping it on and pretending “armed” is “prepared”. It’s not, but then again, that goes for everything. Cheers, ISG team
Category: Firearm SkillsBy ISG TeamJune 25, 2021