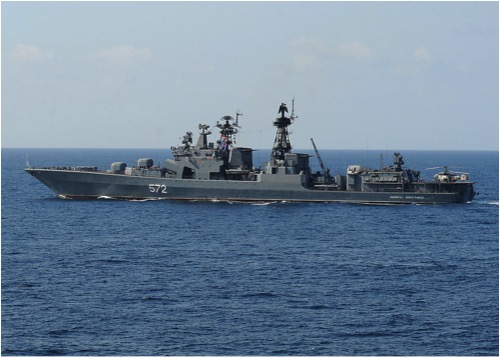 The ISG Weekly Information Summary: An unbiased look at the happenings around the globe, and how they could impact life closer to home. June 09, 2019.

On June 7th, 2019, a Russian Udaloy-class destroyer maneuvered dangerously close to the USS Chancellorsville in the Philippine sea.The latter vessel was attempting to recover its helicopter when the Russian ship approach from the stern and came within between 50 and 100 feet, creating the strong risk of a collision. In a statement, a US Navy spokesperson said “We consider Russia’s actions during this interaction as unsafe and unprofessional and not in accordance with the International Regulations for PreventingCollisions at Sea (COLREGS), “Rules of the Road,” and internationally recognized maritime customs.”

This is only one incident. Accidents happen at sea, even between naval vessels. However, this comes at a time when Russia is pushing back and attempting to expand its sphere of influence—or at least shore it up.It also happens in a contested area of the world, in which China, the US, and regional powers are attempting to secure dominance. Whether this is a one off mistake or a deliberate test of US resolve remains to be seen, but the story is worth watching.

According to some US sources and officials, Sino-Russian relations are at an all time high. A combination of concerns about US hegemony, a list of shared political ideas, and a number of shared goals and concerns have brought the two great powers into “unprecedented” close cooperation.Russia’s desire to expand its influence in the Pacific dovetails nicely withChina’s aims for the Indian Ocean and Central Asia, leading to a level of collusion never seen before. While Russia is a more active participant, both nations have an eye on the ongoing developments in the Persian Gulf due to the ongoing war in Yemen and the potential for direct conflict between the US andIran.

During the Cold War, the Sino-Soviet split was a deciding factor. Having the two largest Communist powers at odds gave the US a real advantage in key regions of the world. Cooperation between Russia and the PRC could pose a serious challenge to American military and diplomatic efforts around the world, forcing the US into a multi-front potential conflict that will be a serious test of US military capabilities and resolve. The US knows this, as the Pentagon shifts its planning from the War on Terror to a peer-on-peer conflict and US diplomacy works to shore up key alliances in Southeast Asia and around the Indian Ocean. A great deal remains to be determined, but the coming months and years will be critical in the outcome.
‍

For over two hours on June 6th, a significant portion of European mobile internet traffic was routed through the infrastructure owned by China Telecom. The traffic shift was a result of a BGP leak at a Swiss Data Center, which accidentally released 70,000 or so routes from its internal system to the Chinese one. When China Telecom operators realized the mistake, they took corrective action. The traffic involved was mostly from France, Holland, and Switzerland.

China’s tech and telecom sectors have found themselves in the middle of a global conflict about the role of tech, information gathering, and espionage. Mobile giant Huawei gets most of the press, but China Telecom has come under scrutiny before now, having been accused last year of “hijacking the vital internet backbone of Western countries.” Collusion between Chinese corporation and its military/intelligence sectors is nothing new; per Chinese law it is the duty of every citizen to contribute to state security. The ongoing cold conflict between China and the US is being fought on multiple fronts, from trade wars to alliance building and now into the tech and telecom sphere.

Hundreds of thousands of people took to the streets of HongKong on Sunday, June 9th in protest of a proposed law that would allow PRC authorities to extradite people from Hong Kong to stand trial inMainland China. Since the handover from the UK to China in 1997, Hong Kong has retained its democratic institutions to some degree and a greater degree of personal freedom than is generally found on the Mainland. In recent years, however, Beijing has taken a more aggressive stance, working gradually to bringHong Kong in line with the rest of the country. As one veteran activist put it:“This is the last fight for Hong Kong. The proposal is the most dangerous threat to our freedoms and way of life since the handover”.

As always, this is a relatively small thing: the agreement between the UK and PRC at handover did allow for Hong Kong to be eventually reincorporated into China’s political and legal systems. However, China is jumping the gun and moving ahead of schedule. This points to a more aggressiveChina, one that is seeking to expand its reach both internally and externally.Internal dissent, chiefly in the predominantly Muslim west of the country, has been an ongoing issue. Beijing has taken the step of mass imprisonment forMuslim activists and rebels, much to international dismay. Similar steps may becoming for pro-democracy activists if laws such as the one in question here pass.

The last 12 months have been record setting for much of theUS. The Southeast experienced the wettest year on record in 2018, in part due to the damage wrought by Hurricanes Florence and Michael. More recently, we’ve seen devastating flooding across the heartland, causing billions in damage to property, crops, and infrastructure. 2019 has also given us a record-setting number of tornadoes, and the resulting damage is also measured in millions if not billions.  Projections for the near future aren’t great either: increased seismic activity is likely in SouthernCalifornia and hurricane season 2019 is off to a fine start, with a fairly active season likely.

There are direct and indirect costs in this, and they’re ongoing. Insurers are on the hook for over 10 billion in payouts resulting from recent storms. Coastal communities in the Carolinas and Florida are still recovering from last year’s hurricane season, but in terms of rebuilding and in recouping business loss and recovering from the decline in tourism. As ISG has discussed in the past, food prices are likely to rise quickly due to the lost harvest. This is likely to have a ripple effect across the economy.

While the US has reached a partial conclusion to its trade wars via Trump’s agreement with Mexico, our ongoing trade disputes with China will likely continue. This contributes to the mix, pushing prices in undesirable directions. Internal issues such as this are often overlooked in geopolitical analysis, but their impact on the economy, trade, and the national mood can often bring tangible results.

LA’s homeless population has exploded, up 16% over the last year and totaling over 60,000 human beings. Homeless camps sprawl across LA’s urban landscape. The causes of homelessness are many: mental illness, poverty, lack of affordable housing, drug addiction, violence. City officials blame rent prices and a wave of evictions in the area. The sheer volume of the homeless has spawned more of the same issues, creating a dangerous downward spiral. The city has spent $620million attempting to address the issue, to no notable success. Billions more in spending are schedule. Despite these efforts, diseases such as typhus have made a resurgence in the city, chiefly among the homeless population due to their lack of hygiene resources and sanitary food.

It’s easy to joke about this—LA has a longstanding reputation as an urban hellhole. Skid Row, an actual LA neighborhood, is synonymous with homelessness and poverty. However, Los Angeles is generally a ripple or two ahead of theAmerican wave, and what’s happening there can be seen in nascent form in cities of all sizes around the country. The American economy is a mixed bag. While it’s true that employment is at record highs and wages are on the increase for the first time in decades, there is a growing displaced underclass of folks without adequate employment or housing. This is doubly true in economically repressed regions, or places affected by natural disaster.  Ongoing external issues–the trade wars, the threat of real conflict in the Persian Gulf—will tend to exacerbate these problems. Time will tell of course, but the reality is we are likely looking at significant changes in the American way of life in the future.

A recent border and trade dispute between the United States and Mexico reached a resolution on Friday, as President Trump concluded an agreement with the Latin American nation. Mexico agreed to increase its own border security, deploying more than 6,000 additional troops to its southern border with Central America. Mexico also agreed that migrants seeking asylum in the US would be housed in Mexico while their applications were being processed.In return, President Trump has dropped the threat of a trade war, which would have included gradually increasing tariffs on Mexican imports.

Mexico had initially taken a relatively hard line withPresident Trump, refusing to pay for the wall, to give in on the migrant issue, and attempting to navigate around the threat of tariffs. Now they’ve conceded on most of his major points. This is a victory for Trump, and likely encouraging given that the US is still engaged with a similar trade war against China.However, China is watching closely, and Mexico’s actions and their aftermath will be carefully studied by the PRC. Likewise Trump’s adversaries in this country are paying careful attention; the 2020 election season is ramping up and Trump’s momentum is building steadily. With a divide Democrat field, Trump could be putting the pieces into place to hand him and the GOP a solid performance come next November.

A further complication comes in the foreign relations sphere. With China and Russia increasingly aggressive, the US is going to be critically reliant on its allies globally in maintaining various regional hegemonies. How Latin American governments will respond to Trump’s moves inMexico remains to be seeing, especially in light of the ongoing crisis inVenezuela. Russia and China have already expressed interest in the region, withRussia troops visiting the country on occasion. As always, it’s a complex and evolving situation. We’ll have to wait and see.